Sky News host James Morrow says the Sydney COVID-19 lockdown is a “tremendous failure of leadership”. “We’re 18 months into this, the rest of the world is moving on,” he said. “And Sydney, the engine room of Australia’s economy, is stuck again in this state.”

“Police have always said that they will be firm, but fair. We are now in a position where we need to be much more firm than fair”. 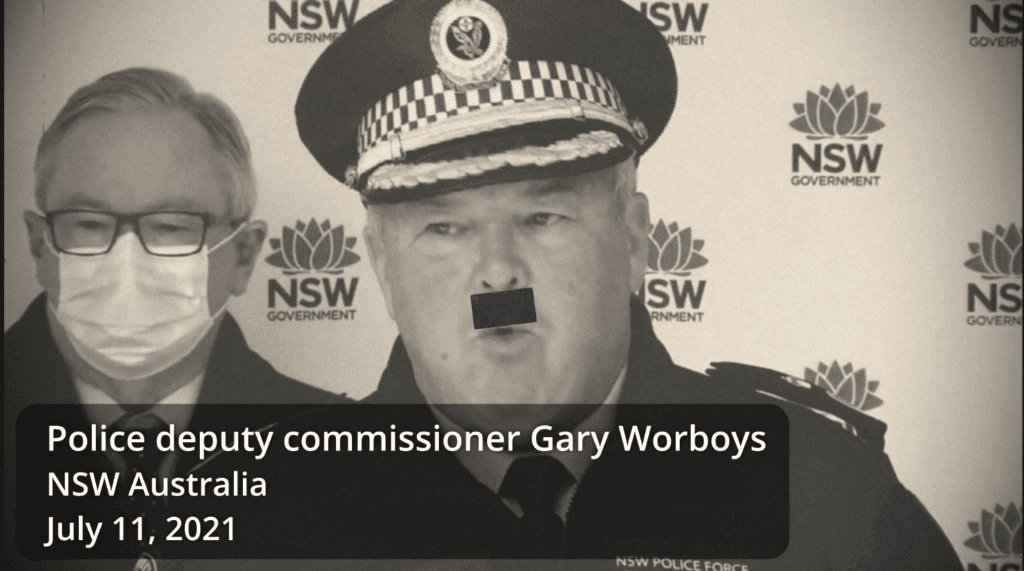 Officials from the region have made it clear: “No browsing” and no shopping with other people.

Below, the segments with the police spokesman from this morning’s presser:

The full press conference can be seen here, for anyone studiously wishing to chart the descent into communism the world is on.

For those that do watch the whole video, watch the two women, one of whom is Gladys Berejiklian, Premier of NSW, and Dr. Kerry Chant, public health physician who is the chief health officer of New South Wales, Australia since 2008. Both women speak in a way that reminds us of this video from a Dr. of Psychology, who explained the Nudge methods of public control that is being used on all of us.

Evin Priest The Australian July 11, 2021
.
NSW Police have blasted a group of men playing cards inside a tiny apartment in Sydney’s inner west after the state issued more than 100 fines for Covid-19 breaches. NSW Police said 106 infringement notices were handed out across NSW. Six of the infringement notices were given to people in rural areas such as Orange while eight of were handed out at Kings Cross.
.
Penrith and southwest Sydney were areas of concern.
“The spread of the infringement notices is right across the state, which is disappointing,” Deputy Commissioner Gary Worboys said.
.
“What I do know is that people continue, right across the state, to ring Crime Stoppers to (breaches) with over 1200 messages on the police system (yesterday) for police to attend locations.”
.
However one gathering in Sydney’s inner west had Deputy Commissioner Worboys fuming.
.
“One of those instances was a unit at Marrickville, where police responded to information and they went to that unit and found 15 men in a small unit playing cards,” he said.
.
“These men were (aged) in their 50s, through to just short of 90 years of age, (wearing) no masks, no social distancing (and) clearly in an environment that was a huge risk to them, their families and their community.
.
“Police issued infringement notices and we’ll follow up and make sure that each and every person that was there playing cards is dealt with appropriately.”
Deputy commissioner Worboys also drew attention to an 18th birthday party at Auburn.
.
“Another incident that I‘d like to highlight was in the Auburn area where police were called to a premises near Sydney Olympic Park where an 18-year-old birthday party continued,” he said.
.
“There were 10 people at this party; clearly organised. They turned up, they were aware of the public health orders and police took action in terms of infringement notices to each of those people and closed the party down and they were directed to returned home.”
.
He also voiced frustration with a group of young people caught playing PlayStation in a garage under a set of units in the Merrylands area in western Sydney.