Thousands of demonstrators have gathered in Melbourne’s CBD, protesting against vaccine mandates and the state’s new pandemic laws. 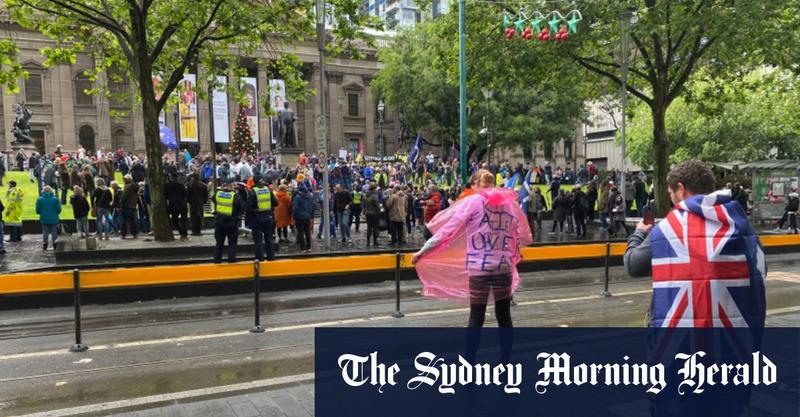 For the third weekend in a row, thousands of demonstrators flooded Melbourne’s CBD on Saturday ahead of a planned “camp-out” protest outside State Parliament starting next week opposing the state’s controversial pandemic laws.

Victoria Police do not reveal crowd estimates but numbers at the weekly rallies – which rail against vaccines, mandates, Premier Daniel Andrews and the pandemic response – appear to have been increasing in recent weeks. 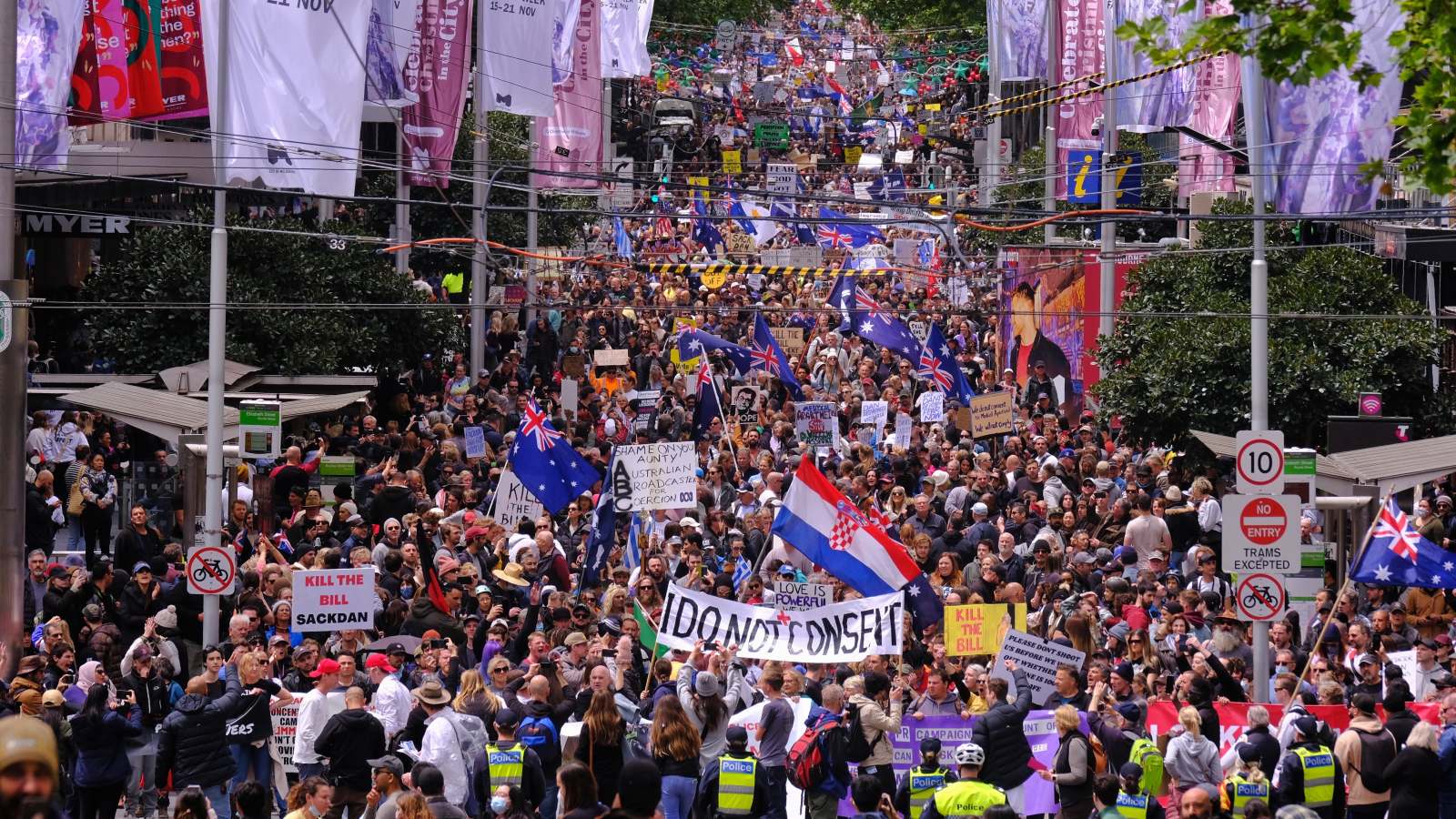 We’ve all had a gutful of living in lockdown.
It’s time to demand your freedom – and Unlock Australia.
What began as two weeks to ‘flatten the curve’ has morphed into over 200 days of soul-crushing, job-destroying lockdowns.…
See more 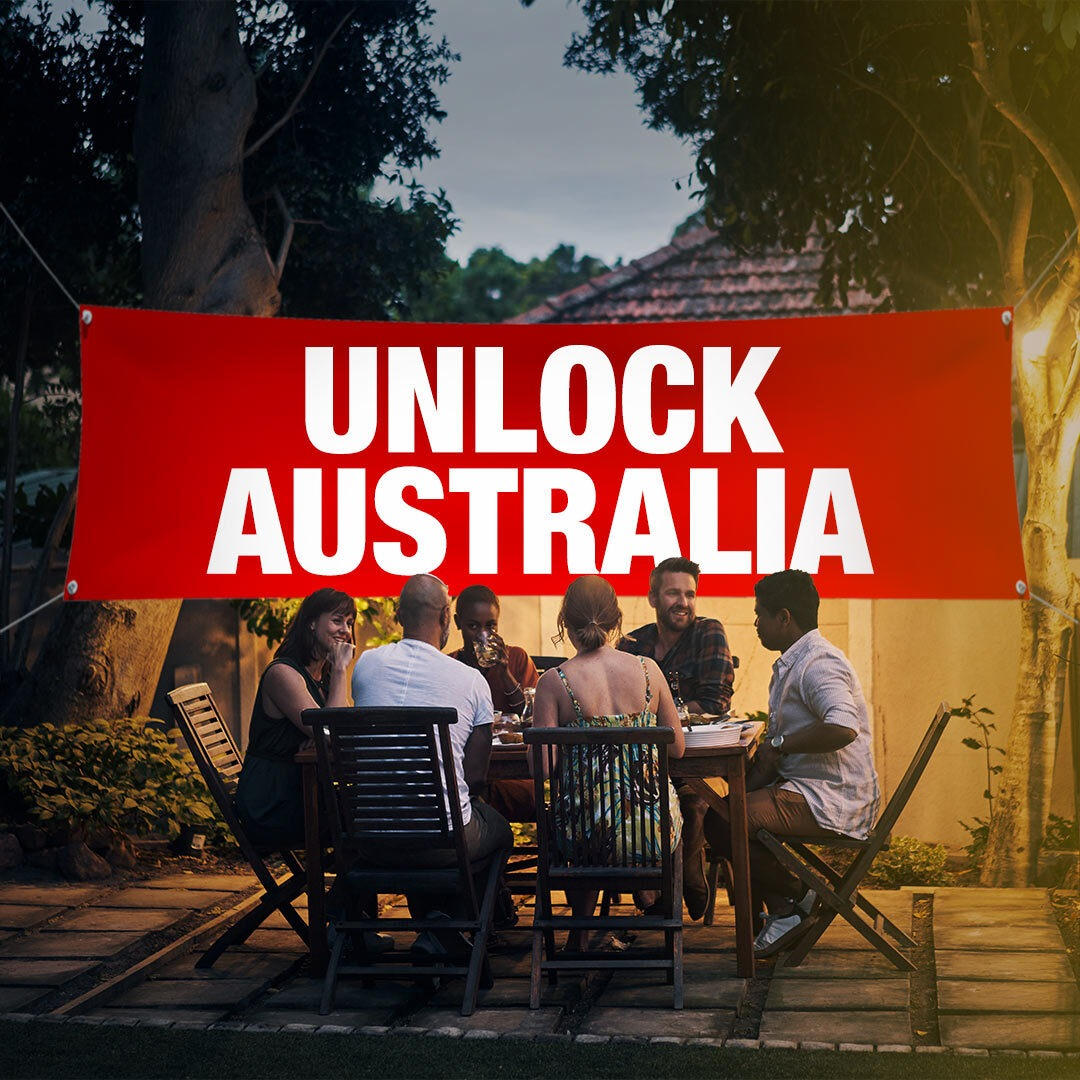 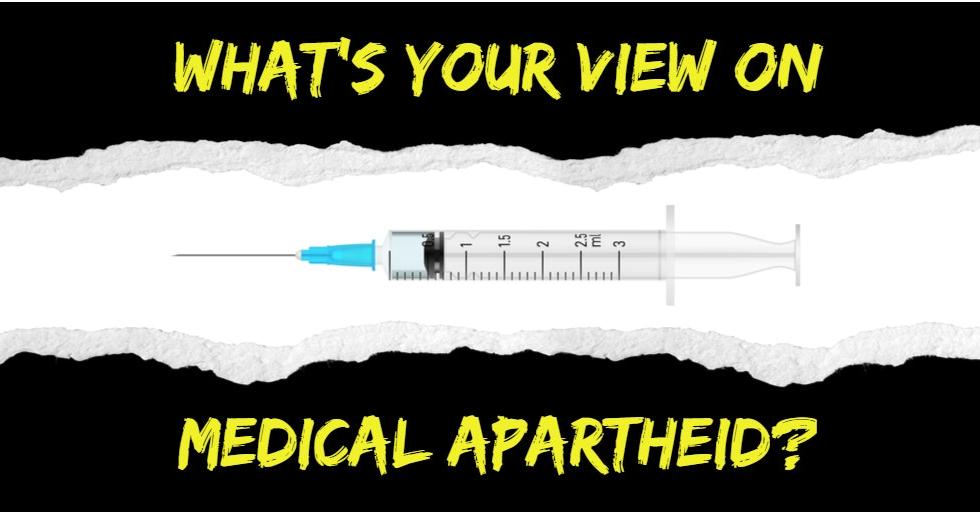 Victorian Liberal MP Bernie Finn and federal MP Craig Kelly both addressed the crowd on Saturday. Protesters were heard shouting death threats against Premier Andrews and one man carried makeshift gallows with three nooses hanging from it as he marched through the streets.

Organisers have planned a 24/7 protest at State Parliament from Monday morning, claiming they will camp out to fight the bill.

“The movement is stepping up and we are not going away until this bill is dropped,” a message sent out on encrypted Telegram chat rooms on Saturday stated.

While Saturday’s protest was peaceful and attended by young, old and families with children, many speakers, chants and signs blatantly referenced Qanon conspiracy theories including allegations that politicians were involved in paedophilia.

Several banners likened the Victorian government to the Nazis and advocated violence against politicians, and there was a strong showing of religious messaging and insignia.

Someone in the crowd is carrying a fake gallows with three nooses hanging from it @theage pic.twitter.com/xq3curnWAF

Mr Kelly, a former Liberal who now leads the independent United Australia Party established by Clive Palmer, railed against the vaccination of children and vaccine passports.

“We have a lot of fights ahead of us, the most important fight is to protect our children,” he told protesters.

Mr Kelly has been admonished in the past for his unsubstantiated claims around COVID-19 and vaccines. 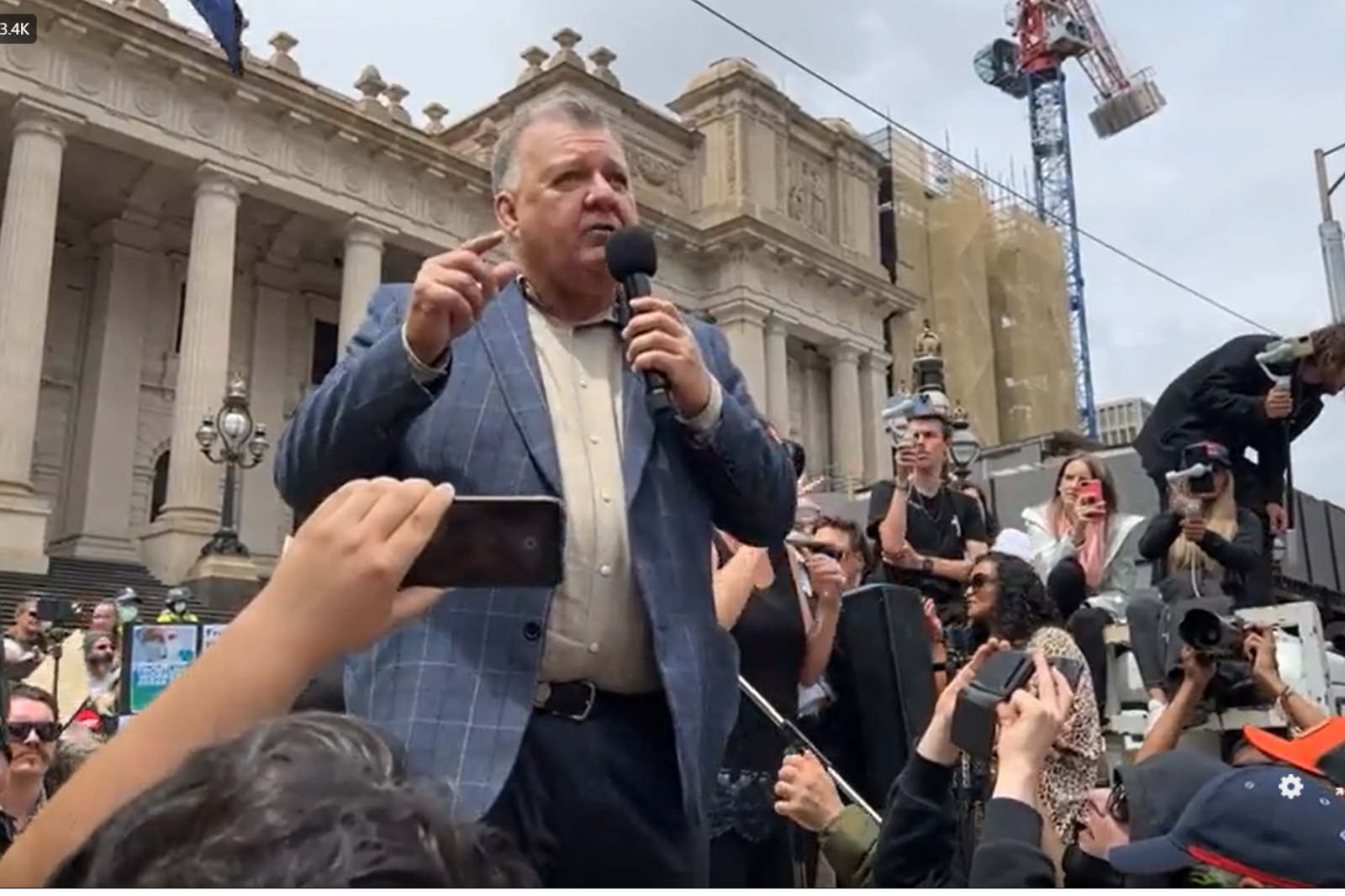 “We are being governed my medical bureaucrats that are part of a mad, insane cult,” Mr Kelly said.

Mr Finn told crowd that they must “kill this bill”.

“This bill, it’s so evil. It’s so wrong. It’s something that must be defeated,” he said. “Despot Dan wants to become an emperor. Enough is enough.” 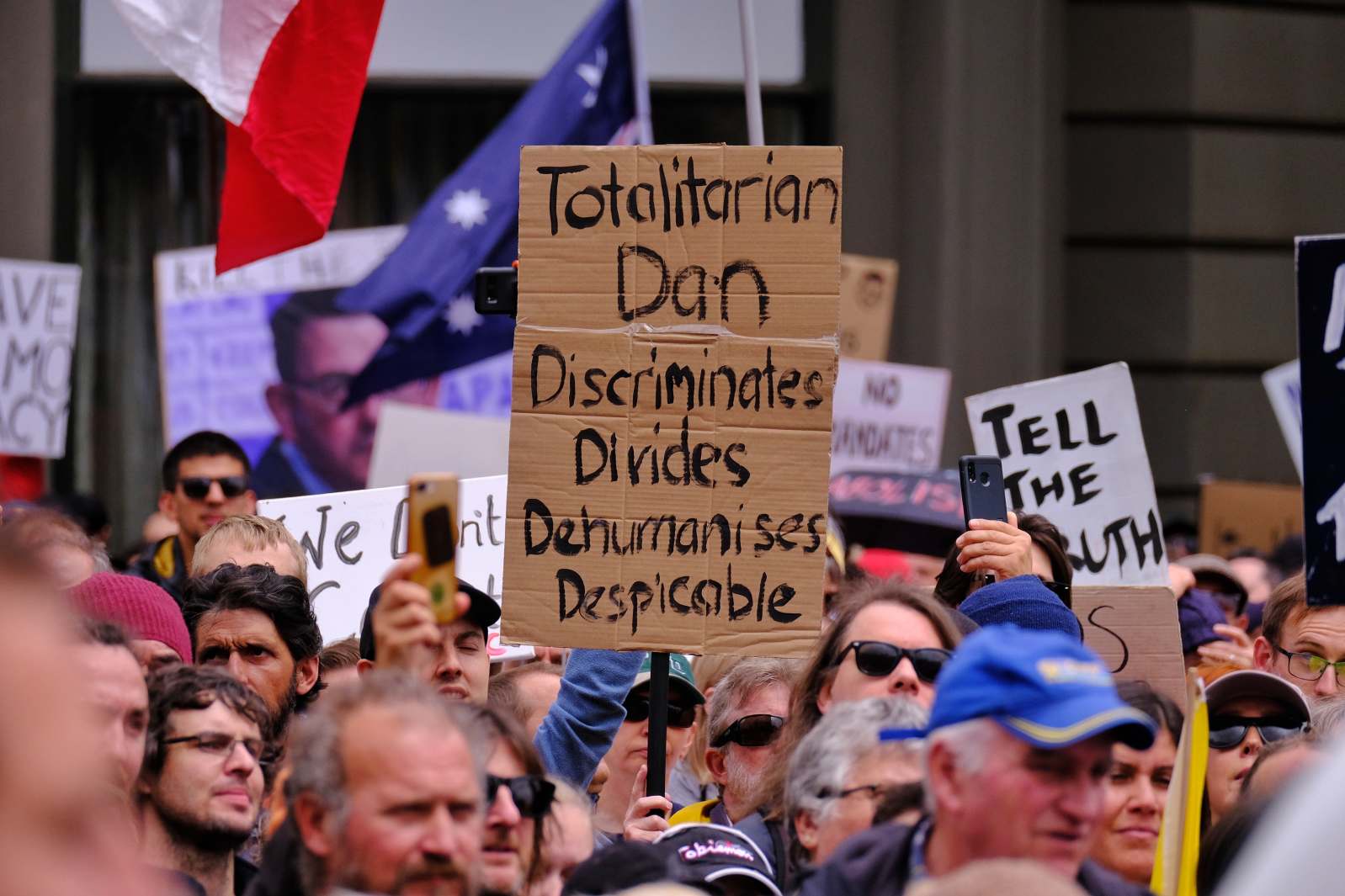 Mr Finn also voiced his support for Sunshine-based GP Dr Mark Hobart, who The Age revealed last week was the subject of an investigation into fraudulent vaccine records.

Some speakers pointed to the QAnon conspiracy theory, including singer Claire Woodley, daughter of The Seekers band member Bruce Woodley, who addressed the crowd saying she wanted to dedicate a performance of I am Australia to the “victims of satanic ritual abuse” – a common talking point in Qanon.

Saturday’s protests follow several other large CBD demonstrations against vaccine mandates and pandemic legislation, including one last week when more than 3000 people took to the streets.

They will also curtail the role of the chief health officer.

The Victorian Bar and 60 top silks have joined an open letter calling on the Victorian Parliament to amend the bill or vote against it, arguing it would give politicians “a blank cheque to rule by decree” in its current form.

The Public Health and Wellbeing Amendment (pandemic management) Bill 2021 passed the lower house last month, and the government is now hoping it will pass the upper house next week with the support of three crossbenchers.

The opposition, which has openly lashed the legislation as “the most dangerous piece of legislation” it has seen, has vowed to derail the process by refusing leave to debate the laws, delaying the debate until at least Wednesday.

Mr Andrews has previously said the legislation is an improvement to human rights and government transparency, but lawyers claim the laws will give politicians “a blank cheque to rule by decree” and are unlikely to achieve the outcomes promised in its current form.