Bolt toes the politically correct line. He is pro vax. He knows it’s not safe, but moral principles be damned, he pushes it anyway. He makes a lot of good points, but no amount of persuasion can cause me to change my mind. That vax is a killer. Those who spread it are criminals. 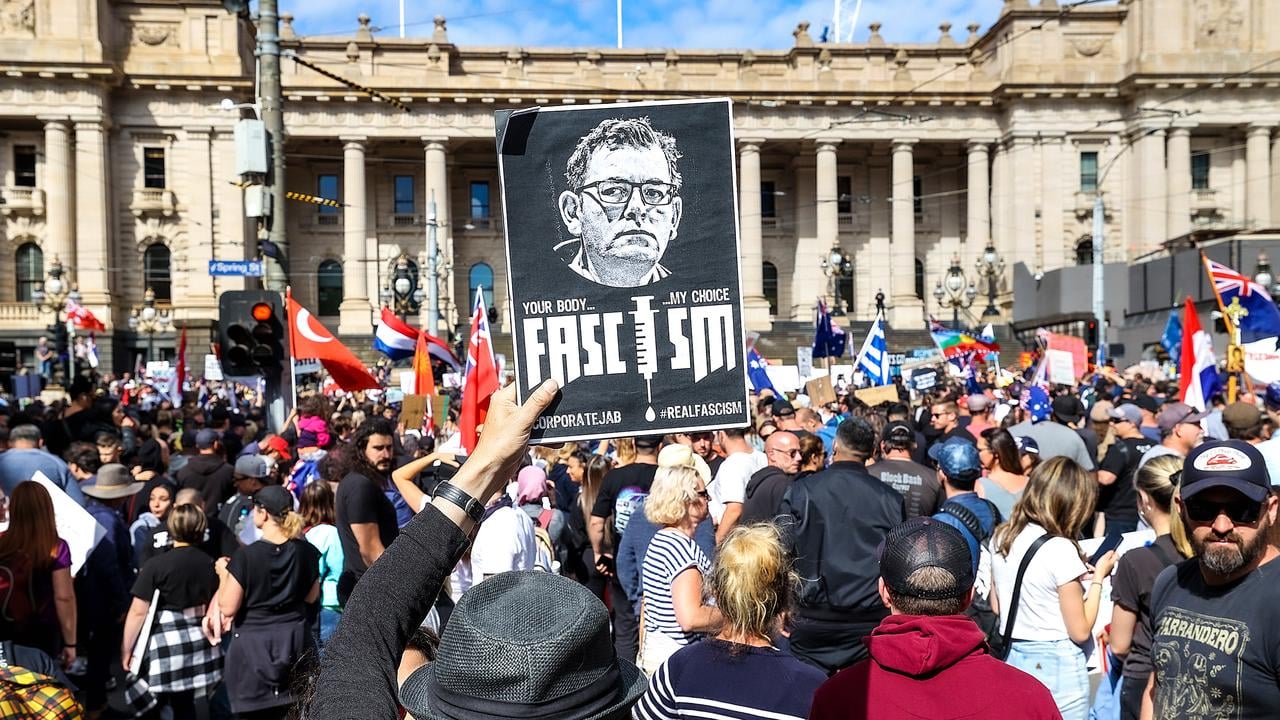 More than 100,000 protesters on Saturday made liars of the despicable politicians who are turning Australians against each other. Those politicians have said such protesters were just a “fringe element” of “extremists” and “anti-vaxxers” who were “rabid”, “dangerous” and “neo-Nazis” – the kind that had threatened to kill politicians and supposedly just bashed one’s daughter. Lies, lies, lies. In Melbourne we instead got the biggest protest I’ve seen here in my life – an MCG-worth of people outraged by compulsory vaccination and harsh lockdown laws – yet so peaceful that just one person was arrested.
In Sydney, under a far less confrontational Premier who will end vaccine mandates next month, well over 10,000 people still protested, also peacefully. None arrested.
.
In Perth, another 10,000 gathered. Many thousands more marched in Brisbane, Adelaide and nine other cities and towns across the land.
.
If these really were our demented underclass of racist conspiracy freaks, they must have been on double Ritalin.
.
No one was hurt. No police were attacked, as happens at demonstrations of the Left. No windows were smashed.
.
No one made “Sieg Heil” salutes, either. In fact, the Melbourne protesters waved not guns but an Aboriginal flag as well as Greek, Spanish, Austrian and Turkish ones, and some danced to an African drum. 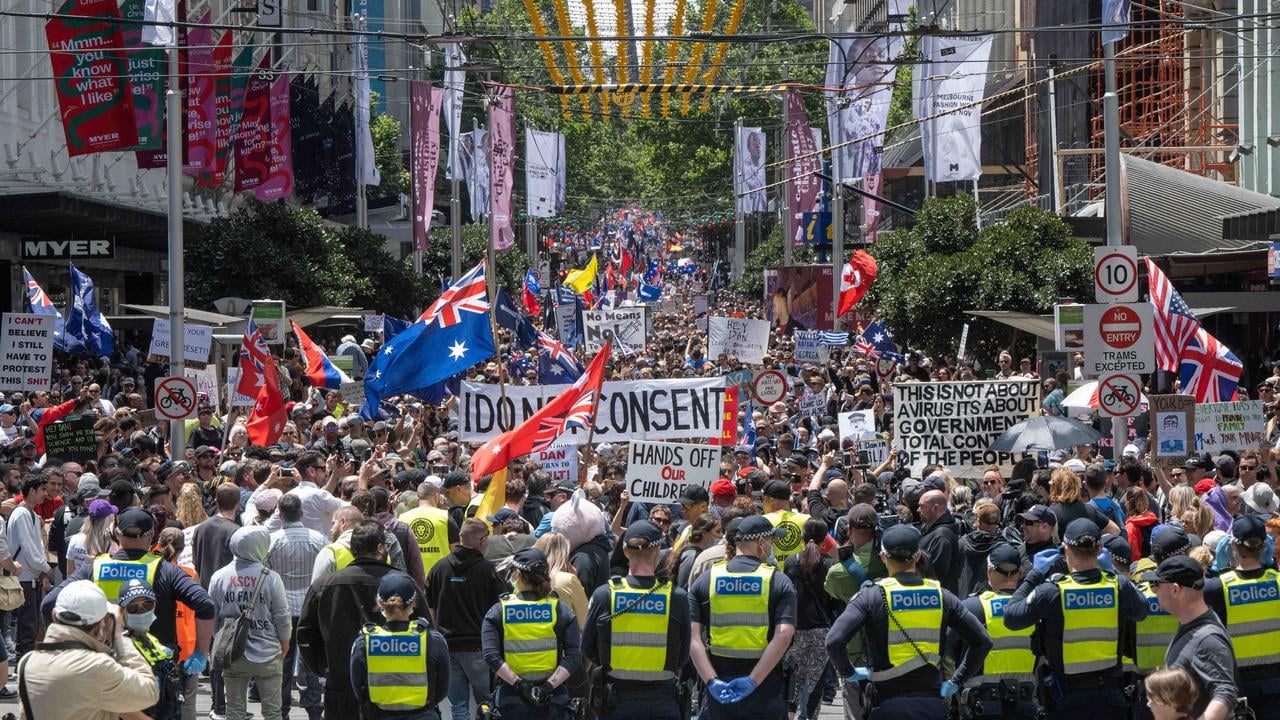 These protesters were as threatening as a church picnic, and when that many Australians march – despite the media abuse, despite little advertising or organisation – we know some politicians have played a dirty and dangerous game.
.
Take Daniel Andrews. He last week abused protesters outside his parliament as “ugly extremists” who’d threatened him and his family, and said Liberal MPs who’d talked to them were just “currying favour with extremists”: “Politics is often about what you stand for and it’s always about who you stand with.”
.
Andrews’ real target was obvious. He was just trying to paint the Liberals and other opponents of his draconian pandemic rules as ratbags on the side of nutters and thugs.
.
Worst of all, this divide-and-conquer hatemongering works in our age of virtue-signalling. Andrews is still very popular, despite being the Premier with the most virus deaths, most outbreaks from quarantine hotels and most days of lockdown.
.
Take also Queensland Deputy Premier Steven Miles, who last week played the same vicious game, this time against Scott Morrison, when the Prime Minister said states should restore freedom and scrap rules banning the unvaccinated from even buying a coffee.
.
Miles said Morrison was just “desperate to claw together a coalition of anti-vaxxers for his own political benefit”, and was supporting “dangerous fringe elements” like the Melbourne protesters who’d hanged an effigy of the Premier.
.
But the most blatant example of politicians demonising protesters for political advantage came from Victorian Animal Justice MP, Andy Meddick, a backer of Andrews’ grab for more pandemic powers.
.
Inside parliament, Meddick first claimed a journalist reporting sympathetically from the protests was a “neo-Nazi”, when in fact that journalist, Avi Yemini, is Jewish.
.
On Friday, Meddick then tweeted that his daughter had been “attacked on the street” and “I have reason to believe this could be linked to my role as an MP and the positions I have taken on the pandemic response”.
.
He said protesters had issued “threats … at me and my family”, and “now my worst fears have turned into reality.”
.
Really? Police revealed his daughter had actually been vandalising posters and threw her can of spray-paint at a man who challenged her. He threw it back and hit her head, cutting it open.
.
Naturally, Daniel Andrews retweeted Meddick’s misleading statement.
This brutal politicking must stop.
.
Yes, many protesters hate and fear the vaccine, which I think wrong, but others just fear their loss of freedom.
You may not agree, but is the answer really to abuse these many people, make a nasty example of them and exclude them from society, as in Victoria?
All of them? At what cost, financially and to our harmony?
.
Sure, it would be safer if everyone got vaccinated, but the extra danger of those few remaining unvaccinated adults spreading the virus to you is only marginal if you yourself are double-vaxxed.
.
That doesn’t even make sense. Unvaccinated people are healthy. The vaxxed are spreading the virus.
.
There comes a time when the price of pushing too hard for full vaccination is higher than letting it go and trying gentler ways for the same protection. Like persuasion.
.
Thanks but no thanks.
.
But the harder tyrannical premiers push – abusing the unvaccinated, telling lies about them and waving the big stick – the less that good people will trust them when they say the vaccines are safe.