They did the right thing. They shot him dead on the spot. Allah wouldn’t have it any other way:

Verse (9:111) Allah has purchased from the believers their lives and their properties [in exchange] for that they will have Paradise. They fight in the cause of Allah , so they kill and are killed 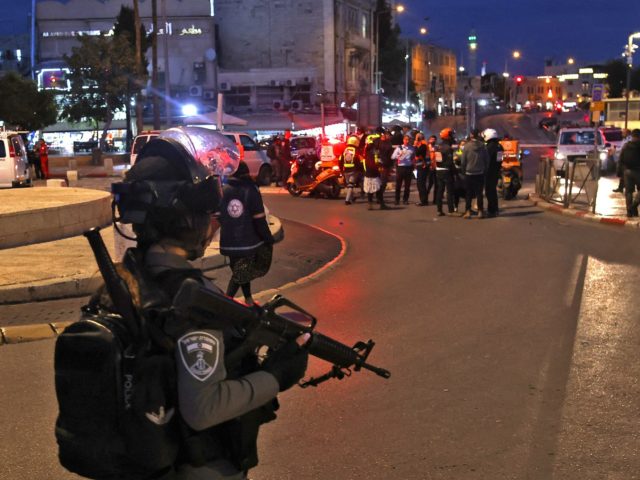 CCTV footage shows the terrorist stabbing Avraham Elimelich, a 20-year-old ultra-Orthodox man, in the neck, on a street near the flashpoint Damascus Gate.

The terrorist then tried to attack police officers who shot him.

The assailant can be seen on the floor when police officers fire two additional shots.

The police video can be seen below: WARNING: Extremely Graphic

The suspect, a Palestinian who had smuggled into Israel illegally, was previously arrested for incitement to violence in 2019.

In initial videos released on social media by passersby, as well as an edited video released by the Palestinian Foreign Ministry, it looks as if the terrorist is immobilized on the floor with police officers shooting at him.

The videos prompted Israel Police to open an internal investigation.

However, both Israeli Prime Minister Naftali Bennett and Public Security Minister Omer Barlev said the investigation was launched prematurely, and that a video of the entire scene released later by police proved this.

“Regarding yesterday’s incident at Damascus Gate — I am glad that this time, not long after the edited Palestinian video was distributed, the full video was published by the police. I suggest to everyone: Never rush to make a judgment about the behavior of officers in complex operational situations in the face of terrorism. It’s always better to wait a minute,” Bennett said at the start of the weekly cabinet meeting.

According to a statement released by his office, Bennett said he “fully backed” the actions of the police officers, who “took the quick and determined action against a terrorist who tried to murder an Israeli civilian.”

“We cannot allow our capital city to become a hotbed of terrorism,” he added.

“The full video leaves no room for doubt that they acted excellently, as is required of them in such an operational situation.”

Barlev agreed that the officers acted as they were supposed to and said it was his “personal opinion that an investigation should not have been opened.”