Because we all know that the 26th participant would carry the virus. Got it!

New Zealand’s Ardern: Vaccinated Can Engage in Tinder ‘Liaisons … Up to 25’ 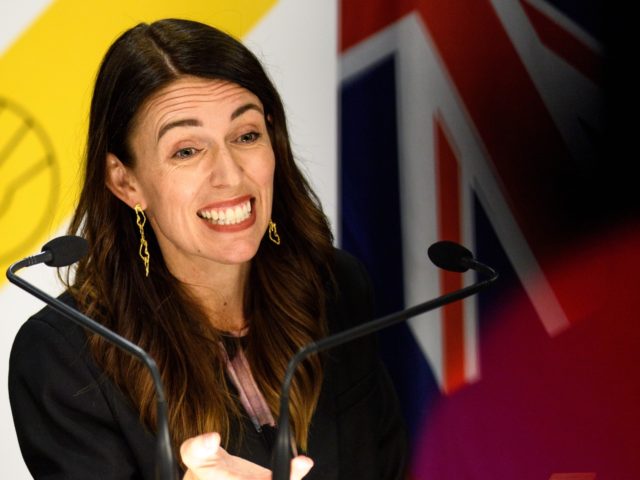 Far-left New Zealand leader Jacinda Ardern joked during a recent broadcast that Tinder “liaisons” of up to 25 people could continue despite the nation’s authoritarian coronavirus restrictions, the fact-checking website Polygraph confirmed on Tuesday.

The video, circulating on social media this week, shows Ardern and the Seven Sharp hosts laughing while discussing the “traffic light” system, which ranks the safety of every place in the country from the Chinese coronavirus pandemic based on vaccination rates and social distancing protocol.

“I can confirm that Tinder liaisons have reopened,” Ardern said on the program. “It’s not strictly embedded in the traffic light system but um, it is a given, up to 25 actually, in a red area.”

Tinder is a mobile phone dating application that allows users to rapidly rate singles, or other users, in their area and “matches” two people who rate each other positively, giving them a chance to talk and get to know each other. Tinder notoriously became a point of confusion during the height of the Chinese coronavirus pandemic in the United States when American public health celebrity Anthony Fauci, an enthusiastic supporter of limits on social movement and business activities to contain the virus, said of Tinder, “that’s your choice.”

Ardern has a political history with Tinder. In 2012, she bought an ad on the dating site, encouraging bored singles to abandon the quest for love and engage with politicians from her Labour Party.

“Clocked Tinder? Fear not there are still political candidates keen to talk to you (about voting). So go on, ask me anything (about voting),” the advertisement read.

“I think I should make it very, very clear that the ad makes it very obvious that I’m not there for the traditional purposes of Tinder,” Ardern said when the ad came out. “It’s basically just a little ad that says look, if you want to talk about politics, if you haven’t found what you’re looking for on here but you want to talk about politics instead, drop us a line.”

Ardern has expressed openness to using social media applications such as the Chinese app Tiktok for political advocacy, though of that venue she said this year, “I don’t think there is any possible way that I could do a TikTok with COVID [Chinese coronavirus] messaging that would be seen as acceptable to any age demographic.”

Ardern’s appearance on Seven Sharp was meant to be an informative intervention to explain the implementation of a new “traffic light” system that will restrict citizens’ rights as previous ones did but, according to Ardern, in a more flexible way.

“At the moment it’s a little too early to say what challenges Omicron might pose to us. But as I say, we’ve designed a system that allows us to have as many freedoms as possible safely while we are stepping into that new way of working,” Ardern said elsewhere on the broadcast.

The system works like Venezuela’s “traffic light” system in that it uses the traditional colors of a traffic light – red, green and, in New Zealand, orange – to indicate how much freedom a location should have. Unlike Venezuela’s, which classifies every individual by color based on their vaccination status and recent testing, the New Zealand system is location-based and rankings are based on collective, not individual, vaccination rates. Hard lockdowns, Ardern’s socialist government affirmed in October, would end when 90 percent of New Zealanders are vaccinated.

At the green level – the freest – Ardern will still impose limits on mass events like weddings or religious services. Those events are limited to only 100 people at a time, all of whom must be one meter away from each other. Indoor activities and outdoor activities at green are subject to the same rules, despite overwhelming scientific consensus that outdoor activities are much less high-risk for coronavirus transmission.

Ardern also responded affirmatively at the time when asked if the traffic light system was meant to create “two different classes of people,” stripping rights away from the lower class, or unvaccinated.

Ardern’s far-left administration obtained a clear majority in Parliament last year in an election significantly hampered by lockdowns and limitations on campaigning. Labour celebrated a landslide victory after Ardern delayed the elections abruptly, moving them from September to October, “to plan around the range of circumstances we will be campaigning under.” The opposition National Party had complained that Ardern’s coronavirus protocol had made it extremely difficult for them to campaign

“It’s going to be very difficult to have an election in mid-September when we are now mid-August. It is very little time,” then-National Party leader Judith Collins said at the time prior to the delay. Collins has since lost her leadership position after presiding of a historic defeat.

Notably, in the beginning of 2020, polls showed the public evenly split between the two parties; Ardern’s repressive coronavirus policies and disturbance of the election schedule preceded a landslide “win.”

Ardern’s restrictions on campaigning and delaying the election when early polls showed a close race did not affect New Zealand’s standing as a “free” nation in Freedom House’s 2021 global assessment. The NGO even cited the election as a reason that it gave New Zealand a perfect score on “free and fair elections.”

The questionable adherence to human rights such as freedom of association and the right to participate in a free and fair election have also not stopped the years of effusive praise for Ardern from the international far left. As recently as this week, the U.K. Guardianpublished a loving ode to Ardern’s alleged “kindness,” “compassion,” and “cooperation” that described Ardern’s policies as a “warm, cosy [sic] bath.”