Mr Kelly, the leader of the United Australia Party and federal member for Hughes, told an anti-vaccination rally at Hyde Park on Saturday that he was ashamed to be an Australian after Djokovic’s visa was cancelled.

Australia is a continent stuffed with frightbats who believe if you don’t get vaccinated you’ll drop dead. 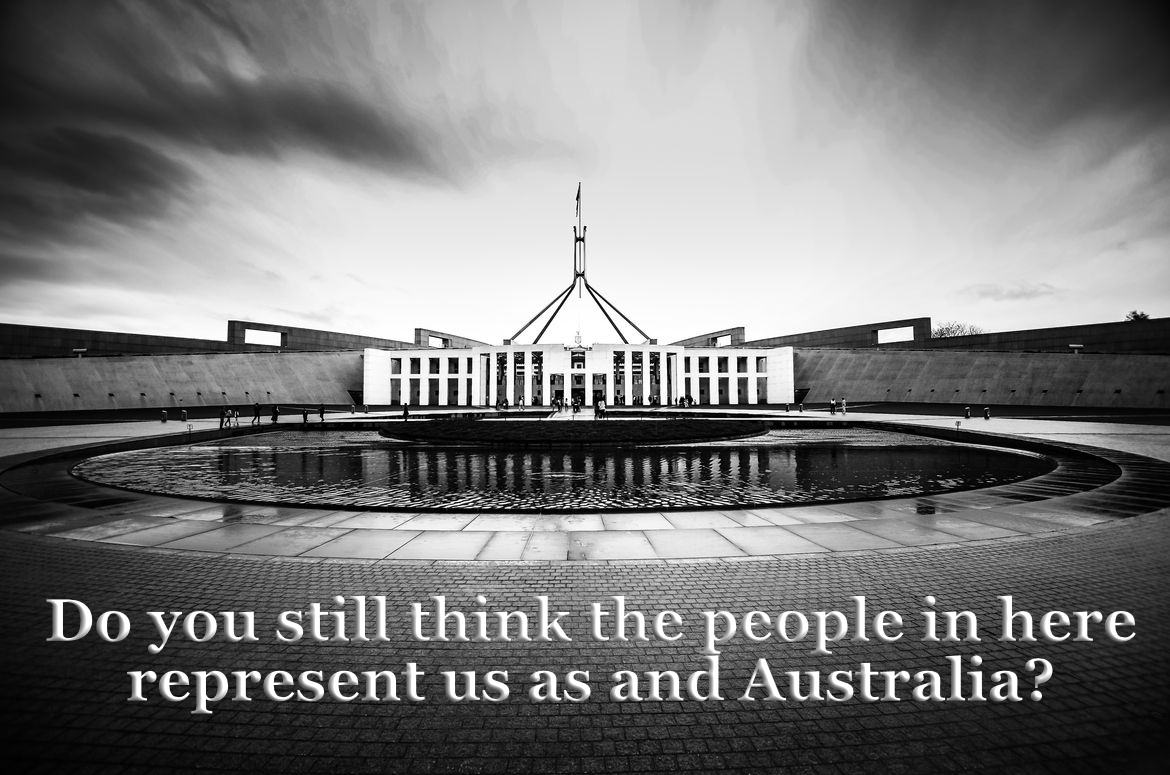 Daniel Andrews slips that only 50% on people in Melbourne are vaccinated. That’s a far stretch from the lie of 93%!
I'll be so glad when we don't have to see this guys face…but who will replace him. His opposition are very quiet. Do they even exist?🧐😮🇦🇺 pic.twitter.com/C6cQF9qwP7

UNIVERSITY OF QUEENSLAND WAS SET TO TREAT FIRST WAVE OF 2020 COVID PATIENTS WITH HYDROXYCHLOROQUINE BEFORE JEANETTE YOUNG BANNED ITS USE pic.twitter.com/0RMUq5QyJ2

Mainstream Media are a bunch of 🤡🤡 who lie, manipulate & deceive

There were thousands in Sydney

And YES Djokovic is a POLITICAL PRISONER in Australiahttps://t.co/FWVnqH3IIr

Mainstream Media have no idea

Mainstream Media should be questioning WHY there are 10,000s of new cases DAILY

Given THEY told us 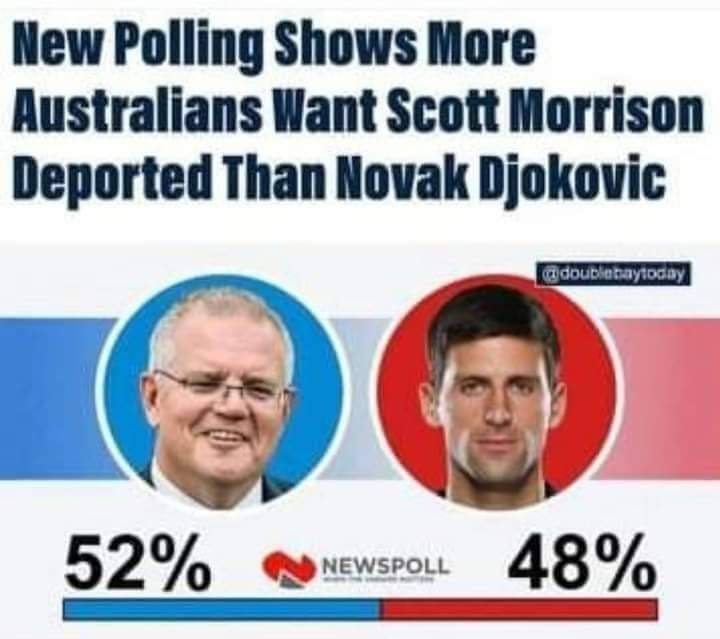 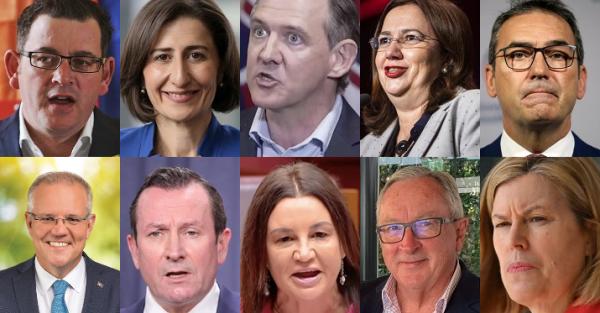 The only place where I would want to see this mob is in a barrel of acid.

Doctors EVERYWHERE, including myself are fed up with the harmful outpouring of misinformation from Fauci being promoted by the media. pic.twitter.com/ao66ikCTqf

“The Prime Minister has put the tennis player Novak Djokovic into detention today,” he said. “Today the world’s No.1 tennis player is a political prisoner of the Morrison regime.

“This embarrasses our nation. It brings shame upon our country, and it plays into the sentiment of vindictiveness and spitefulness that is not the Australian character.”

Djokovic was spotted being driven into Park Hotel on Saturday afternoon, the Carlton detention centre where he was held after the first cancellation of his visa.

Watched by scores of police, Mr Kelly told the rally organised by the Reclaim The Line group that Prime Minister Scott Morrison had made the Serbian tennis champion a political prisoner. 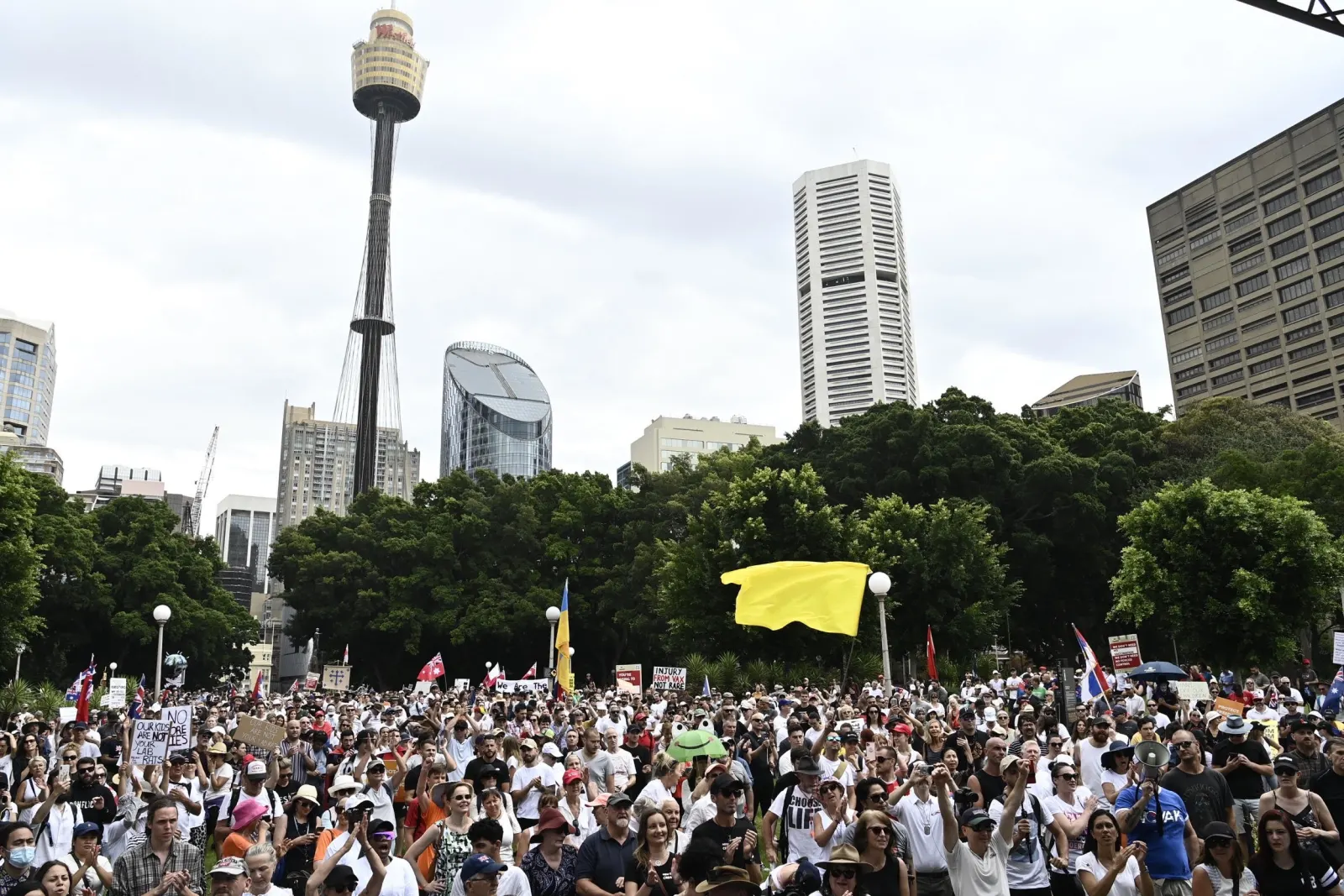 Earlier, the crowd of at least 1000 people marched from Prince Alfred Park and along Elizabeth Street, loudly chanting and waving the Eureka, Australian and Serbian flags.

The march was one of a number organised around Australia by Reclaim The Line, which claimed on its website to resist “medical apartheid”, protect children’s future and “break down the emerging segregation within our society”.

Earlier, the crowd of at least 1000 people marched from Prince Alfred Park and along Elizabeth Street, loudly chanting and waving the Eureka, Australian and Serbian flags.

The march was one of a number organised around Australia by Reclaim The Line, which claimed on its website to resist “medical apartheid”, protect children’s future and “break down the emerging segregation within our society”.

It also said it aimed to support the music industry “that has been largely destroyed, by showcasing local musicians at future events”.

Apart from the drummers and rapper, the rally also featured a singer performing a cover of John Farnham’s You’re The Voice.

Marchers also brandished placards with messages such as “Freedom needs no passport”, “Hands off our kids” and “Vax free are the new 1940s Jews”.

Several marchers also held orange signs with the words “Protect freedom of choice” and the One Nation logo.

One protester carried a globe of the world with needles stuck into it and a skeletal face looming above two syringes.

At Hyde Park, the crowd gathered in front of a small stage where two long-haired drummers played before making way for a rapper whose foul-mouthed performance seemed ill-suited to rally organisers’ attempts to portray the event as family-friendly.

“We also heard last night, at that late-night court session, that the reason for the cancellation of Mr Djokovic’s visa was not because he had done anything wrong,” Mr Kelly said.

“Was not because he had filled out any form incorrectly but because, in the opinion of the Migration Minister, that somehow or other his being in the country would inflame what they call, so-called, anti-vax sentiment.

“There is no anti-vax sentiment,” Mr Kelly said. “The sentiment is against taking away your freedom and forcing you to be injected with a substance against your free will.”

Mr Kelly concluded his remarks by saying he hoped the Prime Minister and Labor leader Anthony Albanese had taken note of the rally.

“Because I tell you what,” he said. “We have just begun to fight. We’re going to take it to them every single day up to this next election and, as we say, sack them all.”