It never stops. It will not stop until we stop it. They are not coming because of “climate emergency”. And they’re not coming to enrich us.

Crashing the Border at Melilla 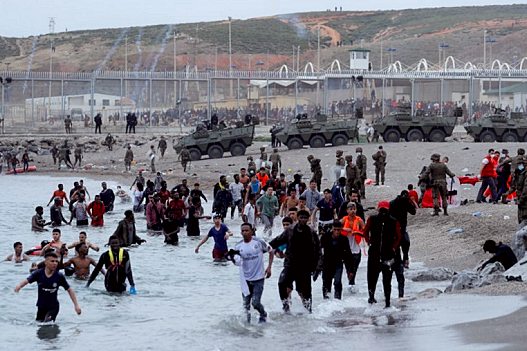 Some 1,200 migrants take part in a second day of jumping the fence at Melilla, of whom 350 succeed

Some 350 migrants have succeeded in jumping the fence at Melilla in the early hours of Thursday, one day after 491 persons succeeded in entering the autonomous city in the same manner.

As Efe [news agency] has been able to confirm, this attempt was carried out by a very large group and took place at 7am in the area between the border crossings of Barrio Chino and Beni Enzar.

Several immigrants remained perched on the top of the fence faced with the important deployment of security on both sides of the perimeter. 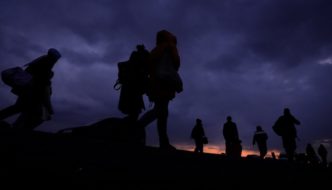 Syrian, Iraqi, and Afghan Muslim migrants pass themselves off as international students in Ukraine to enter EU

“The Prophet said, ‘War is deceit.’” (Bukhari 4.52.269) “Syrian, Iraqi and Afghan migrants mingle with Ukrainian refugee flows trying to enter the EU,” ReMix News, March 2, 2022 (thanks to The Religion of Peace): The flow of refugees from Ukraine is not decreasing, only changing its character. Thousands of Syrian, Iraqi, Afghan, or Kurdish migrants who previously entered […]

UN Human Rights committee has given Australia one year to change its policies to stop rejecting refugees and change its migration laws to come into line with international standards.

The UN recommends Australia revise its laws “irrespective of the results of the Australian Marriage Law Postal Survey” and ensure that all its laws and policies afford equal protection to LGBTI persons, couples and families.

.
Australia’s high levels of violence against women, its rate of indigenous incarceration, and levels of discrimination based on race and religion, including attacks on places of worship, were also criticised in the report.

AUSTRALIA needs to stop rejecting refugees and change its migration laws to come into line with international standards, the UN Human Rights Committee said in a report released overnight.
NEWS.COM.AU
.

Radio interview with wife of former detention centre security guard details threats that she has received from detainees.

Ray reads an email from a former security guard on Manus Island and speaks to his wife, Alana, who called in to detail the threats she’s received from detainees
2GB.COM

It seems being given priority over native Brits isn’t enough. Perhaps the NHS should just stop treating Brits at all, you know, to be more inclusive.

Syrians resettled in Britain last year are dissatisfied with the NHS, and unhappy about being placed outside of cities, a UN report has said.– Breitbart

Why is The University of Melbourne financially supporting a terrorist group? – XYZ
.

Antifa is a terrorist group. They are made up of the most radical political extremists in Western society today and to achieve their political goals they promote and use violence.

.
They exist to intimidate anyone who sufficiently disagrees with them into silence lest they face a mob of armed, black masked thugs.

.
They exist to intimidate venues and employers of people with whom they disagree into cancelling events and firing people, using threats of violence and property damage.

.
They exist to force any opinion they personally judge unworthy of being aired out of the public square with baseball bats, knives, pepper spray, boots, fists and Molotov cocktails.

.
The group has been labelled as terrorists by the U.S state of New Jersey and the U.S Department of Homeland security. Even one of their sympathisers Troy Whitford [a Lecturer in Australian History and Politics at Charles Sturt University] was forced to reluctantly admit that Antifa does indeed fit the definition of a terrorist group.

.
So naturally the University of Melbourne publishing imprint Melbourne University Press is printing a how-to guide for potential recruits to this violent extremist organisation.

.
If you disagree with them, you’re a fascist, and so they’re allowed to beat you up.
After all, they’re Anti-fascists, so anyone they beat up MUST be a fascist.
Mark Bray has also declared that half the proceeds from the sales of his books would be donated as funds to Antifa groups. Which means that the University of Melbourne, the second oldest university in Australia, ranked 33rd in the world and 1st in the nation is helping to promote the funding of a group that wants to smash in the skulls of people very much like you in the street with metal pipes.

Why is The University of Melbourne financially supporting a terrorist group? –
.
Continued: Melilla
.

Those who entered Melilla ran to the Center for Temporary Stay of Immigrants (CETI). According to the Government Delegation in Melilla, at 6am the Civil Guard Command observed a large group of immigrants, some 1,200, who were approaching the fence, so the anti-intrusion mechanism was activated. Around 7:25am, after overcoming the Moroccan security forces, the crossing of the fence in the area between the border crossings of Barrio Chino and Beni Enzar began. The anti-intrusion mechanism, made up of officers of the Civil Guard and National Police, with the collaboration of the local police at roadblocks, neutralized and prevented a significant portion of the group from getting into the city, and it is estimated that some 350 entered the city.

Efe has been able to confirm that on the Moroccan side of the fence, officers of the neighboring country employed anti-riot material to try and repel the crossing of the fence, and that some of the immigrants remained perched at the top due to the strong security deployment.

According to the government delegation, the migrants, “displayed extreme violence, throwing rocks and using hooks and clubs against the security forces.”

As of this time, four officers of the Civil Guard have been injured and are being treated at the Comarcal Hospital.

Thousands of sub-Saharans are at Mount Gurugu waiting to try and jump the fence.

The sub-Saharans ran to the CETI with evident signs of joy and to the cry of “boza” (victory), and upon arrival, entered the center after removing parts of the clothes and shoes they were wearing.

This Thursday’s entry occurred after the historic fence-jumping yesterday in which 2,500 sub-Saharans took part and 491 succeeded in entering.