Alas, I have no confidence in the French voting system.  But miracles do happen, and France needs one to get out of this mess. 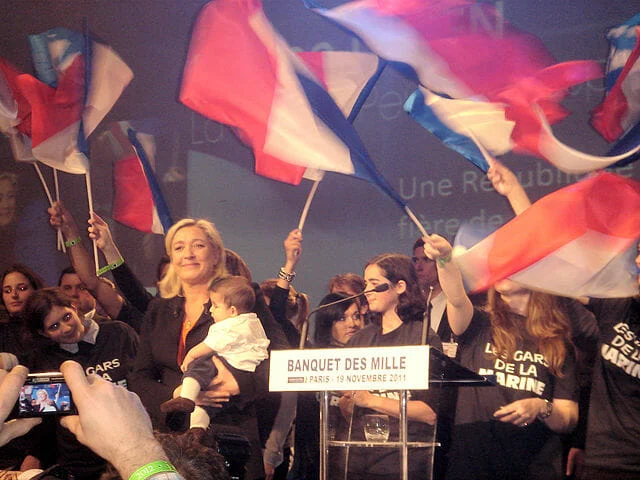 “Right-wing” politician Marine Le Pen is surging in the polls just one day before the French elections on Sunday.

Le Pen is not “right-wing”. She is at best a social democrat. But in Europe, everyone who hasn’t kissed the ring of the globalist cabal is smeared as “right-wing”. The drecks media is beneath contempt.

Evidently in France, they are tired of their open borders and immigrants living off of welfare.

“Muslims are increasingly portrayed as a threat to French society”

Muslims are not “increasingly portrayed as a threat to French society”- they are destroying French society, they will never be part of France but always remain soldiers of Allah.

Yet Muslims are increasingly portrayed as a threat to French society under Macron’s presidency, and Islamophobia has permeated mainstream discourse ⤵️ https://t.co/G4AzIycZMg

France has more than 10 million Muslims. Al Jazeera minimises the threat by claiming their numbers are low, whereas the imams in the mosques brag about how close they are to take over France.

Opinion polls point to the far-right’s Marine Le Pen as the main challenger to President Emmanuel Macron’s re-election, in a repeat of the 2017 match. Le Pen has shifted her campaign focus to purchasing power, the number one priority for French voters, without shedding far-right policies from her election programme. read more. Here are her main policy proposals:

* No income tax for those aged under 30

* VAT on energy at 5.5% from the current 20%. VAT at 0% for essential products such as pasta and diapers as long as inflation is one point higher than growth.

* No employer contributions on pay rises of up to 10%

* Early retirement at 60 for those who have worked 40 years. Increase low pensions

* Scrap inheritance tax for middle- and low-income families. No tax on donations of up to 100,000 euros per child or grandchild every ten years

* Only French citizens will have access to welfare benefits

* Asylum requests to be processed outside of France

Thomas Amghar, one of the leaders of GETTR France, joined Steve Bannon on The War Room on Saturday. Amghar says this is the closest the right has ever come to taking power in France.

The video is embedded here on Gateway Pundit France: Graffiti praising Hitler and gas chambers found at university that is stronghold of ‘Islamist movement’ This is based on the Islamic principle enunciated in the Qur’an: “Drive them out from where they drove you out” (2:191). In line with this, every land that once was ruled by Islamic law belongs by right to Muslims forever, and Muslims have a responsibility before Allah to fight to recover it.

The once great nation of France began to die of moonbattery between the world wars. This debilitating ideology so enervated the French that the Nazis ran roughshod over them. France is now in the terminal stages of the disease, as the population is methodically displaced by largely hostile and unassimilable foreigners from the Middle East and Africa.

Will France die, to be replaced with a Third World, non-European nation with nuclear weapons? Will there be civil war, splintering the country into French and non-French regions? Or is there still hope?

We’ll know better when we learn who comes out on top in the presidential election:

The French go to the polls Sunday for the first round of presidential elections. Centrist President Emmanuel Macron and his far-right challenger Marine Le Pen are expected to be the two top vote-getters who would then qualify for a second round in two weeks.

Last time around, the liberal establishmentarian Macron beat the nationalist rebel Le Pen easily. This time, they are neck and neck.

Meanwhile, no one is stopping Democrats from ending Title 42 so that Biden can open the border floodgates the rest of the way, swamping the country with grasping invaders and putting America on track to face the same demographic crisis that threatens to erase France.

But never mind that, there is a local conflict in East Europe that the media wants you to think about instead.