Pope Francis: Migrants Are Not ‘a Virus from Which We Need to Be Protected’

Obviously, this South American communist is not concerned about women and children from the Ukraine who are fleeing a war zone. Since they are orthodox Christians, they don’t deserve a mention. No, the old geezer is concerned about his pet project: the invasion by unassimilable African savages & Arab Moslems. 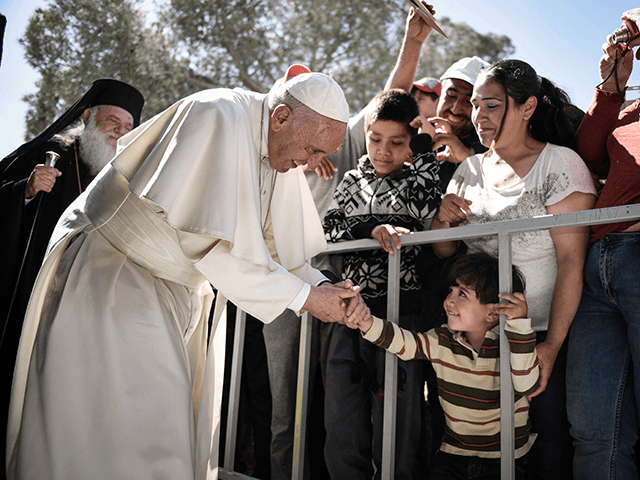 ROME — Pope Francis called for greater openness to migrants Saturday, appealing for a change of narrative from the primacy of national security to the primacy of welcome.

Addressing civil authorities on the first day of his visit to the island nation of Malta, the pontiff urged his hearers to open their hearts and “rediscover the beauty of serving our neighbors in need.”

“Today, when those who cross the Mediterranean in search of salvation are met with fear and the narrative of ‘invasion’ and safeguarding one’s own security at any price seems to be the primary goal,” Francis said, “let us help one another not to view the migrant as a threat and not to yield to the temptation of raising drawbridges and erecting walls.”

African savages are not crossing the Mediterranean “in search of salvation”. They are rent seeking parasites at best; and if they’re Mohammedans, they invade to spread Islam.

“Other people are not a virus from which we need to be protected, but persons to be accepted,” he asserted, adding that the Christian ideal is “a summons to overcome suspicion, ingrained mistrust, fear of losing our privacy, all those defensive attitudes which today’s world imposes on us.”

There is no cure for his madness. This South American communist should be drowned in a barrel of acid and dumped in a deep hole in the catacombs.

In his discourse, the pope compared migrants landing on Malta’s shores to Saint Paul, who was shipwrecked on Malta two millennia ago and “found ready assistance.”

The really important thing, the pope said, was that “Paul was a man, a man in need of assistance. Humanity is first and foremost: that is the lesson taught by this country whose history was blessed by the arrival of the shipwrecked apostle.”

Given the growing influx of migration in recent years, “fear and insecurity have nurtured a certain discouragement and frustration,” Francis said. “If the complexity of the migration issue is to be properly addressed, it needs to be situated within a broader context of time and space.”

The migration phenomenon is a sign of our times and “brings with it the burden of past injustice, exploitation, climatic changes and tragic conflicts, whose effects are now making themselves felt,” he declared.

Neither applies. This gibberish is based on lies & a rewriting of history.

“From the poor and densely populated south, great numbers of people are moving to the wealthy north: this is a fact, and it cannot be ignored by adopting an anachronistic isolationism, which will not produce prosperity and integration,” he added.

Parasites will be parasites and more of them will not produce prosperity.

The Mediterranean “needs co-responsibility on the part of Europe, in order to become a new theatre of solidarity and not the harbinger of a tragic shipwreck of civilization,” he said. “The mare nostrum should not become the biggest cemetery of Europe.”