Does that sound too good to be true? Would be nice if it happened. The woke mob  that controls Twitter needs to be removed. Musk might just be the guy to do it. 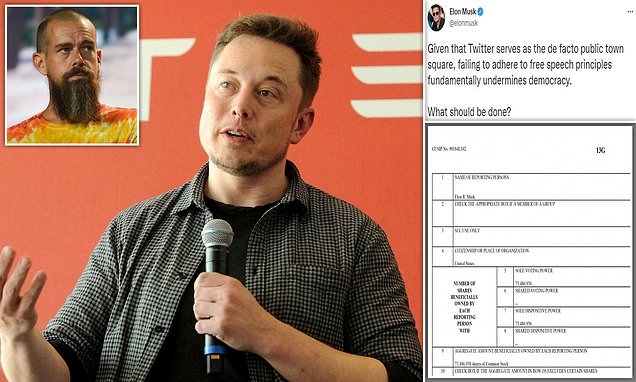 Elon Musk has become Twitter‘s largest shareholder after buying a 9.2 per cent stake in the social media company.

The world’s richest man worth an estimated $273billion bought nearly 73.5 million shares, a document filed with the US Securities and Exchange Commission shows.

It means the Tesla co-founder has more than quadruple the shares of Twitter’s founder Jack Dorsey, who owns 2.25 per cent.

Tucker Carlson: Elon Musk restoring free speech to Twitter would be a threat to the people in charge

Thanks to Elon Musk, the Big Tech monopoly may be ending

who gave this moron a mandate “to protect users” from speech he doesn’t like? 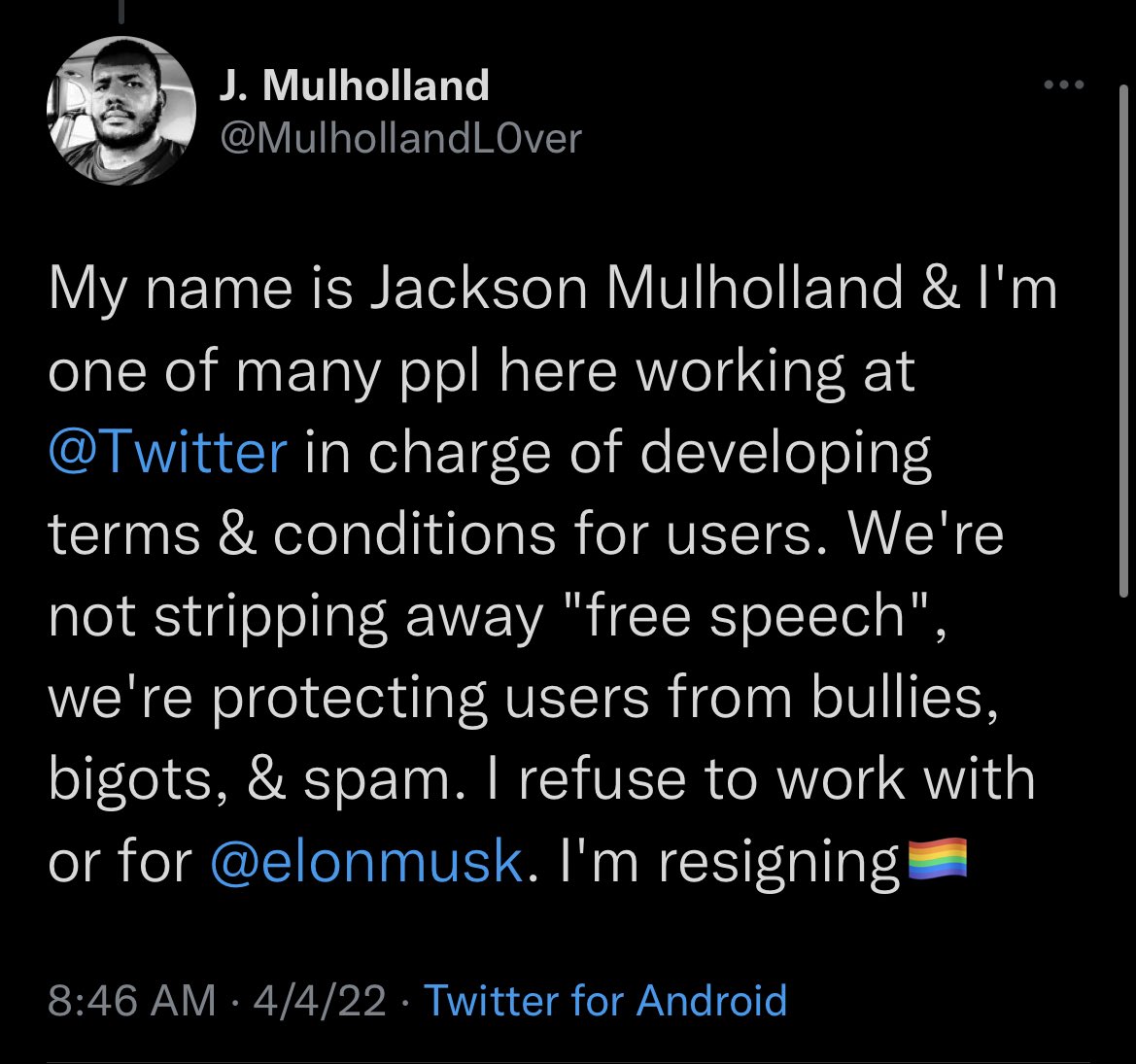 His passive stake in the company is valued at up to $2.9billion based on the stock’s Friday close, and the estimated cost of the deal was $2.4billion, according to the stock price on March 14 when he bought the shares.

The news prompted Twitter’s stock to soar by more than 26 per cent in pre-market trade before Wall Street opened on Monday, meaning his shares are now worth around $3.6billion, earning him an interested $1.2billion in three weeks.

Musk’s stake in Twitter is considered a passive investment, which means he is a long-term investor that’s looking to minimize his buying and selling of the shares.

‘We would expect this passive stake as just the start of broader conversations with the Twitter board/management that could ultimately lead to an active stake and a potential more aggressive ownership role of Twitter,’ Dan Ives of WedBush Securities wrote in a client note early Monday.

Passive investment is a strategy for slowly building wealth by long-term ownership of stocks rather than engaging in frequent trading, which is often accompanies by additional fees and can be more volatile.

‘This eventually could lead to some sort of buyout.

‘This makes sense given what Musk has at least been talking about, at least from a social media perspective.’

The shares are held by the Elon Musk Revocable Trust, of which he is the sole trustee.

On the same day as the filing of the SEC document, Musk challenged Vladimir Putin to a fight on Twitter and posted a meme about supporting current trends.

The mogul has been raising questions about the ability to communicate freely on Twitter, tweeting last month about free speech and the social media platform.

‘Free speech is essential to a functioning democracy. Do you believe Twitter rigorously adheres to this principle?’ he tweeted.

He accompanied it with a poll on March 25, with 70 per cent of two million users responding that the platform does not adhere to free speech.

Musk said: ‘The consequences of this poll will be important. Please vote carefully.’

In a separate tweet, Musk said that he was ‘giving serious thought’ to creating a new social media platform.

Musk was responding to a Twitter user’s question on whether he would consider building a social media platform consisting of an open source algorithm and one that would prioritize free speech and where propaganda was minimal.

Also last month, Musk asked a federal judge to nullify a subpoena from securities regulators and throw out a 2018 court agreement in which Musk had to have someone pre-approve his posts on Twitter.

US securities regulators said they had legal authority to subpoena Tesla and Musk about his tweets, and that Musk’s move to throw out a 2018 court agreement that his tweets be pre-approved is not valid.

The entrepreneur is a frequent user of Twitter although his posts have occasionally landed him in hot water.

He has over 80 million followers on the site since joining in 2009 and has used the platform to make several announcements, including teasing a go-private deal for Tesla that landed him in regulatory scrutiny.

In 2018, the tech CEO was slammed after calling a British diver who helped rescue a group of Thai boys stuck in a cave a ‘pedo’.

His Twitter posting has also led to accusations of stock manipulation, regularly sharing polls and information about his companies online.

In August 2018, he wrote that he was ‘considering taking Tesla private at $420. Funding secured,’ a nod to Musk’s well-known interest in marijuana.

The issue was, he didn’t actually have funding secured – but the stock price soared at the time, and it was later revealed that Musk apparently wrote the tweet because he ‘thought his girlfriend would “find it funny.”‘ While the company delivered 310,000 vehicles in the period, the figure was slightly below expectations.

Musk has been selling his stake in Tesla since November, when he said he would offload 10 per cent of his holding in the electric-car maker. He has already sold $16.4 billion worth of shares since then.

Twitter was the target of activist investor Elliott Management Corp in 2020, when the hedge fund argued its then-boss and co-founder, Jack Dorsey, was paying too little attention to Twitter while also running Square.

Musk and Dorsey have had some common ground in terms of dismissing the so-called Web3, a vague term for a utopian version of the internet that is decentralized.

Musk is also the founder and CEO of SpaceX, and leads brain-chip startup Neuralink and infrastructure firm The Boring Company.

Dorsey resigned as Twitter CEO in November after 15 years at the helm.

He remains remains the CEO of Square Inc, the hugely successful financial payments company that he co-founded in 2010, and is the sixth largest shareholder in Twitter.