A Paki Degree For Ikhwan Headbanger in Chief Morsi:

By the grace of allah Egypt’s rocket scientist Â PM Morsi received anÂ honorary doctorate in philosophyÂ from NUST in Islamabad on Monday. That’ll do him:Â Â “Morsi is an elementary-school dropout. He is mentally insane.”

The agreement confirmed Jordan’s historic role in protecting sacred sites in Jerusalem, Habash said. It also confirmed Palestinian sovereignty over all of Palestine, including its capital East Jerusalem, the minister added.

The hubris! Â Remember that Jordan destroyed all the synagogues in the Old City, banned Jews from visiting holy sites, and desecrated Jewish cemeteries using the headstones to pave parking lots.Â

You can always trust the Arabs to make good on their promises:

The latest casualty in the Syrian civil war was theÂ Jobar SynagogueÂ in Damascus.
The synagogue was 2,000 years old before it was looted and torched this week.

The 2,000-year-old Jobar Synagogue in the Syrian capital of Damascus â€” the country’s holiest Jewish site â€” wasÂ looted and burnedÂ to the ground.

Yawn. What else is new?

Resheq made it clear that his Movement although striving hard to achieve national reconciliation, yet, it won’t recognize the Zionist entity regardless of the price it might pay for it, stressing, “We want it a Palestinian-Palestinian reconciliation without American or any external dictates because we aren’t happy with the current political rift in the Palestinian arena”. Â  Â Read it all:Â Resheq: Pressures won’t make Hamas bow

Pali Arabs are increasingly rejecting the two-state solution, leaning instead towards turning Israel into a bi-national state governed jointly by Arabs and Jews. by Hillel Fendel/INN

The peace we have to have sounds more like the peace of the grave:

Abu Mazen: ‘A settlement freeze is Obama’s condition, not ours, but we’ll abide by it’

Creepy American Jewish “leaders” (nobody elected them), areÂ rushing to meet with the Israel-hater in the White HouseÂ that they voted for. Of course, nobody in this group will admit to their mind-numbing naivete; once again illustrating, like in 1944, that American Jewish Organizations and most American Jews cannot be depended on to defend the interests of the Jewish people.But they can be depended on to hit you up for money to pay for their jobs.Â Â NeoconExpress

The “good” Palestinian cuts off talks until Netanyahu meets conditions he has already fulfilled.Â ….more 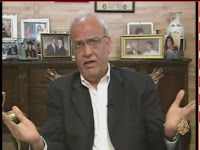 And you thought – because Barack Hussein Obama told you – that it’s urgent to reach a ‘Middle East peace.’ So urgent that European chief diplomat Javier Solana says if Israel doesn’t give in to the ‘Palestinians’ quickly enough, the ‘international community’ will have to impose a final solution.

Â “We Left Galilee on Our Own…”

(Israelnationalnews.com) Fatah chief Mahmoud Abbas says the Arabs of the Galilee city of Tzfat left in 1948 not because they were driven out, but on their own volition.

Many biographies of Palestinian Authority Chairman Mahmoud Abbas imply that his family became “refugees” because of the War of Independence in 1948. For instance, a BBC profile on Abbas when he succeeded Yasser Arafat as PLO chairman in 2005 writes, “In the light of his origins in Safed in Galilee – in what is now northern Israel – he is said to hold strong views about the right of return of Palestinian refugees.” Answers.com states, “As a result of the Arab-Israel War of 1948, he became a refugee.” Wikipedia articles on the topic say the same â€“ all giving the impression that the Abbas family was driven out and became homeless.

The future does not belong to those who gather armies on a field of battle or bury missiles in the ground.

END_OF_DOCUMENT_TOKEN_TO_BE_REPLACED

More onÂ this story, fromÂ Palestinian Media Watch, May 4 (thanks to Jihad Watch).

“The ‘Jewish state.’ What is a ‘Jewish state?’ We call it, the ‘State of Israel’. You can call yourselves whatever you want. But I will not accept it. And I say this on a live broadcast… It’s not my job to define it, to provide a definition for the state and what it contains. You can call yourselves the Zionist Republic, the Hebrew, the National, the Socialist [Republic] call it whatever you like. I don’t care.” [PA TV, Apr. 27, 2009]