Arab Logic in the Hashemite kingdom:

BBC gets one of its facts on “Palestine” right

But imagine my shock when I heard – amid this feast of West-bashing and pandering to Arab grudges – the mention, en passant, of the non-existence of any “Palestine” prior to the 1920s. So unlike the Beeb to let this one slip. At roughly 6 minutes 20 seconds into the programme, the presenter and historian are perusing a pre-World War I map of the Middle East:

Presenter: What was this area called at that time?
Historian: Well, it wasn’t called any of the names we know it as today. It wasn’t SyriaÂ and it wasn’t Palestine, particularly. These were Western names, and Roman names sometimes, we used to refer to this part of the world,Â but at that time it was all just part of the Ottoman Empire.

As usual, he just can’t help it.

Lord Ahmed says prison sentence for texting while driving due to pressure on court by Jews who “own newspapers, television.”

Remember British politician Lord Ahmed, whoÂ spoke of a Jewish conspiracyÂ after beingÂ jailed for causing a deadly road accident while texting behind the wheel? HeÂ subsequentlyÂ ”completely and unreservedly” apologised to “the Jewish community”Â for the remarks.

The Interfaith Racket: Passport to Credibility

Interfaith dialogue is one of those things it can seem impossible to be against. What reasonable, rational person could possibly object to people of different faiths coming together and discussing their differences? Well, as with any negotiation, the problem only really comes if one individual, or group of individuals, heads into the discussion ignorantly or naively while another knows exactly what he is planning to get from it.

END_OF_DOCUMENT_TOKEN_TO_BE_REPLACED

The world has gone insane.

This is the parasite who threatened parliament he would rally 10.000 mad muselmaniacs if Â Geert Wilders was allowed to speak in the House of Lords.

Lord Ahmed Has Been Suspended By Labour

(Not good enough. He should beÂ excludedÂ from the United Kingdom.)

During his visit he alsoÂ reportedlyÂ said that if Iran is attacked, “the Muslim nation should unite against these powers.”

Labour has suspended Lord Ahmed from the party after his alleged call for a Â£10m bounty for the capture of President Obama and President Bush, PoliticsHome can reveal. Â (More below the fold)

A radical Islamic headbanger of Kashmiri origin, Nazir Ahmed, has announced a bounty for the capture of U.S. President Barack Obama and former President George W. Bush according to a report in Pakistan’s Express Tribune newspaper Sunday.

Ahmed, who became the first Muslim life peer in 1998, (thanks to the Labout party who flooded the UK with Koranimals to destroy the peer system) made these comments in Haripur on Friday to express his solidarity with chief of Laskhar e Tayyiba, Hafiz Muhammad Saeed, upon whom the United States placed a $10 million bounty last month.

END_OF_DOCUMENT_TOKEN_TO_BE_REPLACED

“Lord Ahmed”, the Paki sewer rat on whom the unhinged Labour f*kcwits bestowed the title of “lord”, where is he now? Â Will he incite 10.000 Muselmanic Â headbangers to riot while Geert Wilders Â shows ‘Fitna’ in parliament?

Wilders arrives in London, will show Fitna in House of Lords

By calling for the release of ‘Lady Al-Qaeda’, Lord Ahmed has brought the Upper House into disrepute

The popular Dutch MP Geert Wilders is in town again today. And once again the Labour peer Lord Ahmed has objected to this Dutch Parliamentarian appearing in the British Parliament.

What certainly does bring the House into disrepute is a peer using the facilities of the House to throw a meeting calling for the immediate release of the convicted al-Qaeda terrorist Aafia Siddiqui, otherwise known as ‘Lady Al-Qaeda’.

Who did this? Why Lord Ahmed of course. As reported by Associated Press Pakistan last month Lord Ahmed said : Read it all>> (rest of article beneath the fold)

The prominent Labour peer Lord Ahmed of Rotherham was jailed for 12 weeks today after admitting sending texts while driving shortly before his Jaguar ploughed into a stationary car on the M1, killing its driver.

He was sent straight to the cells from Sheffield crown court after a judge described his texting as “prolonged, deliberate, repeated and highly dangerous”, even though it was not directly linked to the accident.

END_OF_DOCUMENT_TOKEN_TO_BE_REPLACED

MANSLAUGHTER NAZI AHMED WHO BANNED WILDERS IS FREED FROM PRISON

* He got 12 weeks and got out after 15 days. Was heÂ disbarredÂ from parliament? Don’t ask!

The Muslim who committed vehicular homicide and promised Muslim riots if Geert Wilders were allowed into Britain was freed after 16 days! I wonder howÂ much prison time the great patriots will getÂ who stood up for their country? LORD Ahmed – the South Yorkshire peer who sent and received text messages on the motorway minutes before a fatal crash – is free from prison today after serving just 16 days of a 12-week sentence for dangerous driving.

It was a gross miscarriage of justice that Nazi AhmedÂ received 12 weeks for killing a man.

END_OF_DOCUMENT_TOKEN_TO_BE_REPLACED The Labour peer jailed for dangerous driving after sending texts on the M1 before a fatal crash could be freed just 18 days into his 12-week sentence.

Lord Ahmed of Rotherham, Britain’s first Muslim peer, was sent to Doncaster Prison last week but his lawyer believes he could be released early.

If so, he would have to wear an electronic tag confining him to his home between 8pm and 6am.

END_OF_DOCUMENT_TOKEN_TO_BE_REPLACED

* Ed Hussein “defends” Islam and Wilders right to free speech, (kind of, but not really…)

Guess which is banned from Britain?

Britain has banned Dutch politician Geert WildersÂ as a threat, on the grounds that its imported Islamists will be violent if they see him:Â Let’s get this straight: A Dutch politician is banned from Britain not because he’s violent himself, but because theIslamists that have been welcomedÂ to Britain could tear the joint apart.

“Lord” Ahmed: Â “It would be unwise to have him in the UK because this man’s presence would cause hatred”-Â Â Lord Ahmed, who said other Muslim peers shared his concerns, stressed that Mr Wilders’ views would certainly present a threat to public order.

“When Muslims are attacked obviously you will see people react to that.”

* Last time I checked Muslims bombed Londonistan. 2 weeks ago British police panicked and ran from attacking Muhammedan rioters. When I watched FITNA I saw rabid Koranimals rave and rant about killing Jews and unbelievers “to the last”, until all the world belongs to Allah. So when Wilders tries to wake up EUrabia’s sleeping dogs, Â Britain’s Muselmaniacs go apeshit?

END_OF_DOCUMENT_TOKEN_TO_BE_REPLACED

By now you should be well Â familiar with “Lord” Nazi. He is the jihadi who threatened the House of Lords with protests and demonstrations if they did not cancel their invitation to Geert Wilders to screen FITNA. TheyÂ submitted to the manslaughterer Lord Nazir Ahmed and bowed before Islam. But yesterday free men prevailed andÂ the House of Lords reversed their reversal.Â whew.
Now this from the jihad manslaughterer:

* Dreck from Pakistan: no problem withÂ BritishÂ Muslims fighting British troops in Iraq or Afghanistan, but with Jews who defend their homeland. This guy is ready for the taxidermist.Â Â Â Â Â Â Â Â

Lord Nazir Ahmed is one of Britain’s most prominent Muslim leaders. This week, he questioned the British government about concerns that British Jews may have served in the Israeli Defense Force during Operation Cast Lead – the three-week bombardment of Gaza.Â

Lord Ahmed’s questions have brought attention to an issue that has significant legal and political implications but which few want to discuss in public.Â

Update: British Jihadists Threaten to Kill MP’s in Their Own Homes

* In other news: “Dr Death” kicks the bucket

Aribert Ferdinand Heim, wanted for medical atrocities at three Nazi concentration camps, lived in Cairo until his death in 1992. His hiding place was unknown until now.

â€” Even in old age the imposingly tall, athletic German known to locals as Tarek Hussein Farid maintained the discipline to walk some 15 miles each day through the busy streets of Egypt’s capital.He walked to the world-renowned Al Azhar mosque here,Â where he converted to Islam, and to the ornate J. Groppi Cafe downtown, where he ordered the chocolate cakes he sent to friends and bought the bonbons he gave to their children, who called him Uncle Tarek.

END_OF_DOCUMENT_TOKEN_TO_BE_REPLACED

UK: “Lord Ahmed” achieves another “victory for the Muslim community”

Another nail in the coffin of British free speech was well and truly hammered in today after it was revealed that a proposed screening of the film “Fitna” in the House of Lords was called off after Muslim peer Lord Ahmed threatened to mobilise 10,000 Muslims if the film was shown.Â The Sun

Updates from Cranmer and DW 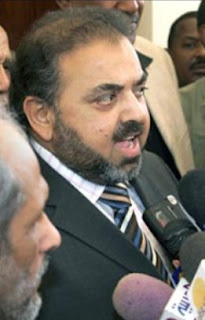 Abject cowardice and complete failure to comprehend the nature of the Islamic threat, Â combined with ignorance and incompetence allow this cretin to intimidate the whole British parliament and make a mockery of British democracy. To permit this filth to sit in parliament is an insult to every Brit. “Lord Ahmed” should have been arrested on the spot and stripped of all his privileges instantly.

“Lord Ahmed”Â is a repugnant individual. Not only in appearance, but in association, character and morality. And to hear that he has threatened jihad on the House of Lords if their lordships should fail to meet his demands only serves to intensify Cranmer’s loathing of the man.