“These merciless Barbarians are taught by their religion to treat the Christian Captives with unexampled cruelty, and that in so doing they do God a service.”

Andrew Bostom reminds us of the barbaric treatment freshly captured slaves could expect from the barbarian Dey of the Algeriennes:Â Â “now I have got you, you christian dogs, you shall eat stones.”Â  Â (thanks to the Religion of Peace)

END_OF_DOCUMENT_TOKEN_TO_BE_REPLACED

Thanks to Moonbattery for the pic

Recently a young writer and filmmaker named Layla Merritt wrote to me about work she has been doing researching and working on a documentary that is dear to her heart. While the film is in development, she created a rough cut trailer and uploaded it to YouTube — it is above. The first day it was on YouTube, she received a serious distribution inquiry from California Newsreel, the premier distributor of education films in ethnic studies films to institutions. But after that, Layla began receiving harassing emails and threats from angry Muslims around the world, who said things like “I can get to you easily, Jew.”

END_OF_DOCUMENT_TOKEN_TO_BE_REPLACED 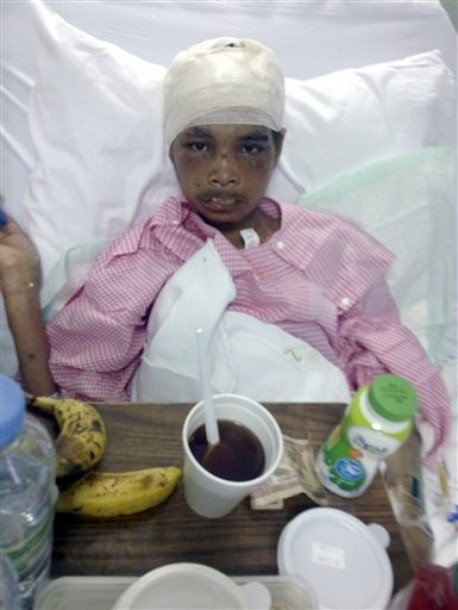 END_OF_DOCUMENT_TOKEN_TO_BE_REPLACED

Saudi Arabia one of the largest aid donors in the world?

Saudi Arabia: “majority of housemaids treated well, its only the media” Â that gives us (Islam) a bad name…

The Kingdom’s stand is very clear when it comes to human rights. Its gesture toward other countries is also well known; it is one of the largest aid donors in the world…. A country that maintains solid and good relations with the international community will not tolerate any kind of abuse within its borders and this is not just because Saudi Arabia follows the teachings of Islam, a great religion that denounces any kind of abuse even of animals, but because it is the natural act by any decent human being regardless of his religion.

There is no end to the BS these goat-molesters expect us to believe. Read it and weep>>.

Even when maids are rescued, they are not allowed home without their employer’s permission, and the Indonesian and Filipino Consulates maintain safe houses where some maids spend years before being allowed home. Usually they have to drop all charges against their employer and renounce unpaid salary before the employer will give them the exit visa they need to leave.

Another inÂ a long line of stories of abuse of Christian workers by Muslims in Pakistan. This behavior has its roots in the doctrine that unbelievers are “vile” (Qur’an 98:6) and must be subjugated (9:29), and of the lawfulness in Islam of sex with slaves and captives (4:24). “Punjab: Christian maid burned alive to prevent her from reporting a rape,” by Fareed Khan forÂ Asia News, via Jihad Watch

END_OF_DOCUMENT_TOKEN_TO_BE_REPLACED

Daily Express: MUSLIMS COULD GET OWN POLICE

Surprised? Well, they already have their own neighborhood police, just ask Omar Brooks aka Abu Izzadeen... who keep infidels out of Muslim territory…

At 2pm est today, on a CFRA radio press conference, it was announced that the police have finally described the deaths of four Afghan-Canadian girls and women, as a “Muslim honor killing.” If the police are right, this is the fifthÂ knownÂ honor killing in Canada since 1999 and it brings the death toll to nine victims. I am no statistician but I have friends who are and they tell me that this is a very high number given that the Muslim and Sikh population in Canada is no more than one million.

Read the complete original version of this itemÂ from Phillis Chesler

Religious Cleansing in Iran: Islam has very little Â tolerance for others once it gains the upper hand.

A consumer-freedom group says President Obama’s nominee for “regulatory czar” is an “animal-rights zealot” who may make life difficult for hunters and meat-eaters. More>>

Here is a stinging indictment of the historical revisionism and outright denial surrounding the treatment of black Africans under Islamic regimes. “The trouble with Black Muslims,” by Rudolf Okonkwo for theÂ Examiner, June 28 via JW:

Even Obama cannot say it. But someone has to say it.

We cannot be talking about this season of hate without mentioning the steep decline into actionable hate by misguided black Muslims.

“You’ve been brainwashed,” the man said to me.
“By whom?” I asked.
“By the blue-eyed white devils who run the world.”
“O’ yeah.”
“They don’t want you to know the truth.”
“Like what?”
“Like all the great things our forefathers did.”
“Like what?”
“Bro, you have to open your eyes. We have to get on with the program of our forefathers.” “And what is that program?”That was how we began a discussion about the world and the place of the black man in it.

* Â Reparations Disclaimer on Slavery Apology Outrages Congressional Black Caucus, “More Than Just an Apology Should be Made”….

“Why are you a Muslim?” I asked him at one point.
“Because my people were Muslims before the blue-eyed white devils bought us and brought us to America as slaves and forced us to be Christians and to worship a blue-eyed Christ.”
“O’ yeah.”
“Yes!”
“But I am from Africa and my grandfather was never a Muslim nor was he a Christian.”

He was shocked when I said that.

“It is OK if you want to be a Muslim and follow Elijah Muhammed and changed your name to Muhammed, too. But don’t tell me you are trying to be like your forefathers,” I said. […]

Some of these people are carrying their misguided and misrepresented history and anger out in the open and are even planning to act on them. It concerns me. And it should concern you, too.