Unfortunately anyone with a CD burner can churn them out in unlimited numbers, so confiscating a few won’t do anything to nip the Jihad ideology in the butt. As long as there are mosques there will be hate-preachers and there will be more & more of those who follow the call to jihad. But not to worry: As we all know, jihad is nothing but “inner struggle”…. 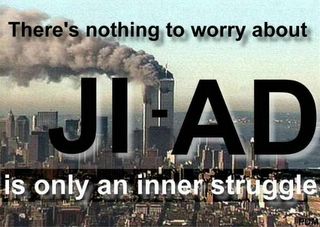 FIREBRAND cleric Sheik Feiz Mohamed’s defense of his comments on a DVD calling children to jihad has been undermined by revelations, the video also urges Muslims to kill the enemies of Islam and praises martyrs with a violent interpretation of jihad.

In the DVD, which runs for almost four hours, Sheik Feiz describes inmates of Guantanamo Bay as better Muslims than those in Australia, who would would not forsake their lifestyles for martyrdom.

*Damn! And I thought they were all innocent victims of American imperialism!

“The brothers in Cuba are better than us,” he said. “They are being examined through the best examination (a reference to God’s judgment) and the like of them worldwide.”

The sheik, who left Australia in 2005 to live in his father’s homeland, Lebanon, exhorts his followers to seek the honorable death of the believer, quoting from narrations about the prophet Mohammed.

“They fight in the cause, they kill others – the enemies who fight Islam and they themselves are killed as martyrs,” he said. He gives the example of a mujaheddin who fought in Bosnia in the 1990s who spoke of nothing but jihad and was killed on the battlefield. “What a beautiful person to be associated with. Would you not like to be an associate of this person?”

The DVD was a recording of a series of passionate fire-and-brimstone sermons that told his audience over several weeks nearly four years ago his thoughts on the way to live their lives. “This is our intention that we want to have children and offer them as soldiers defending Islam, loving Islam,” he said.

Details of the DVD’s contents have sparked an Australian Federal Police investigation and have been met with condemnation.

* Who would possibly condemn the ‘Religion of Peace?’ Are you some kind of Islamophobe?

AFP officers visited the Muslim youth centre founded by Sheik Feiz yesterday to collect a copy of his DVD, which was handed over voluntarily by members of the 4000-strong youth movement.

The two federal agents who arrived at the Global Islamic Youth Centre at Liverpool, in Sydney’s west, declined to comment on the investigation.

About 200 worshippers were at midday prayers yesterday because Friday is Islam’s holiest day of the week.

The centre’s managers referred The Weekend Australian’s inquiries to a phone number, which rang out.

One of Sheik Feiz’s former students, Zeky Mallah, who was acquitted of terrorism charges, said the sermon was normal. “That’s something that’s normal with any Islamic scholar. It’s just a way of speaking about things,” he said.
*
*Normal? I don’t recall having been tought to go out and kill Muslims, not by my teachers, not by anyone else, ever…

Do your kids learn that in school or in church?

*
Sheik Feiz told The Australian on Thursday that his reference to jihad did not mean violence. He said he was against suicide bombing and violence against others.

*Could it be that he is lying? Hmm, and i always thought Mohammedans were forbidden to lie…

However, the DVD is littered with references to violence and a call to arms – most of which is made using examples of historical warriors as an admonishment to modern Muslims for straying from their path.

“If you’re a hardliner, you’ll say these in lectures; if you’re a moderate, you’ll keep these views to yourself,” Mr Mallah said. “It’s not really inciting violence. It is saying to stand up for yourself, to defend yourself and defend your land.”

* In other words, you’re either a bomber or you will be bombed. Got it!

Muslim internet forums were buzzing with criticism of the media for running the story yesterday, accusing news outlets of misinterpreting the meaning of jihad, which can also mean a peaceful quest to be a good Muslim.

*Right. Blame the media. Its all ‘inner struggle’-

I think I need a laxative!

Islamic Friendship Association’s Keysar Trad said that, while he could not comment on behalf of Sheik Feiz, jihad literally meant to “exert effort”, the highest form of which was to stop oppression.

*Now it begins to make sense! So who are the ‘oppressors?’ Us, the kuffars? Could it be that we haven’t surrendered yet and that the sharia is not yet the law of the land?

Keyzar would know. He’s an expert on Islamic jihad all his life. He’s a pro..

But he attacked politicians for “tripping over themselves to attribute the most controversial comments to Muslim leaders”.

“Whilst I don’t endorse in any way (Sheik Feiz’s) comments referring to Jews, nor ambiguous references to jihad, I’m concerned that NSW Premier Morris Iemma has come out and expressed a view on Islam that it only means violence, which is not the case,” he said. “It’s very distressing to me and fellow Muslims.”

* Keyzar, perhaps people realize that denial and your “out of context”-BS just doesn’t cut the cake anymore…