Colin Powell’s endorsement of Barack Obama, the Democratic nominee, has put him at odds with his own son, former Federal Communications Commission (FCC) Chairman Michael Powell.Â

Michael Powell, who served as a policy adviser to Vice President Dick Cheney, is a surrogate for John McCain and represents the GOP nominee on the campaign trail.Â

He endorsed McCain early in the Republican primary in January, and said the Arizona senator was the best candidate to “calm the turbulent economic waters and to steer the new economy in a direction that will bring growth, opportunity and prosperity to all Americans.”

Powell contributed $1,000 to McCain the day of the Iowa caucuses and another $1,000 before the Florida primary. In August, he defended McCain, who had said he rarely uses the Internet, as someone who “understands technology very well” from his time as chairman of the Senate Committee on Commerce, Science and Technology.

His father, Colin Powell, has long been a friend of McCain’s, and in endorsing Obama, the senior Powell broke with the Republican establishment.Â

Colin Powell supported McCain’s 2000 presidential campaign, and McCain promised then to name Powell as secretary of State, a position Powell would later hold under President Bush.Â

But Powell said he was impressed by Obama’s steadiness, intellectual curiosity and depth of knowledge. He called McCain’s running mate, Alaska Gov. Sarah Palin, unready to become president in case of emergency.Â

The younger Powell, however, who still has much of his career in front of him, has lined up solidly behind McCain. If McCain becomes president he could appoint Powell to several administration positions.

Michael Powell served as chairman of the FCC under Bush from 2001 to 2005. During his tenure he advocated for bigger fines to punish obscenity and indecent content.Â

Â Most famously, the FCC under Powell fined Viacom, the owner of CBS, $550,000 for Janet Jackson’s “wardrobe malfunction” during the 2004 Super Bowl.Â
Â

He has addressed the media as a technology adviser to McCain’s campaign, and told National Public Radio in August that McCain has the experience to help create the economic and social conditions for tech businesses to thrive.Â

Michael Powell serves as senior adviser of Providence Equity Partners and rector of the board of visitors of the College of William and Mary. He also serves on the boards of Cisco Systems, ObjectVideo and the Rand Corporation.Â

He served under Cheney during former President George H.W. Bush’s administration, when Cheney held the position of Defense secretary.

Since I wrote aboutÂ Black liberal Colin Powell’s endorsement of Black liberal Barack Hussein Obama, I rememberedÂ this piece I wrote almost a year-and-a-half agoÂ about how Colin Powell had been advising Obama even then, in June of last year. And I also wrote about Colin Powell’s very liberal foreign policy and national security views–which mirror Obama’s–then. Ditto for his support for and benefits from race-based affirmative action.

Given all this are you really surprised that Powell endorsed Obama? Is it really the big deal the liberal mainstream press is making out of it? No and No: 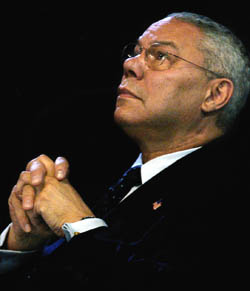 I’ve never liked Colin Powell, and I’ve always seen him as the General and Secretary of State with no clothing. Everyone was so impressed with him, based on absolutely nothing. He was a lousy general, a worse Secretary of State, and a pan-Arabist who helped advance Islamists all around. True, he served our country in the military and during Vietnam, but so have many completely unsung others far better than he.

I remember, during the the Clinton Administration when Americans lined up for blocks, waiting for him to sign their copy of his book at appearances. At that time, Powell had the highest rating of any potential candidate for President. But one of the broadcast network news reporters asked people waiting in line why they liked Powell and which one of his political views they liked. No-one could answer the question. Frankly, they liked Powell because they felt good about supporting a prominent Black man for President. Yet, it was the ultimate racism, because they gave this man a free pass based on race.

Both Bushes–father and son–also engaged in the Powell treatment, giving this lefty a lot of power over military and foreign policy for no good reason other than, frankly, affirmative action. There are plenty of smart, accomplished Black men in the military, the policy analysis arena, and government–conservatives–who’d have been far better.

But rather than reward conservatives who put them in office, both Bushes rewarded liberalism by choosing Powell–a promoter of Arafat and a man who has worked especially against Bush, the son, despite the prominent positions the current Prez gave him. (I’d love to seeIndependent Conservative,Â La Shawn Barber, Thomas Sowell, or Larry Elder in a power position in this or any Administration. Then, America would be in much better shape. They’re far better than anyone currently in the Bush cabinet.)

And Powell repeatedly plays the race card. As SecState, for example, he told MTV that the Bush’s picked him because he has light skin and looks White. If a White person had said that, they’d have instantly been forced to turn in a resignation. But not Colin Powell. All hail the former foreign policy Emperor with no clothing.

Now, Powell is advising the most far-left front-runner in the Presidential race, Barack Hussein Obama, and he’s urging us toshut down the Guantanamo Bay detention facility, and give the terrorist detainees and their ACLU lawyers access to our Judge Ito/O.J./Paris Hilton Justice system.

Yes, we should give the ACLU and terrorists the same rights as U.S. citizens on U.S. soil and let them make such a mockery, such a circus that they go free. Great solution, Mr. Powell.

Actually, I’m glad to see Powell finally consistent in his treatment of Islamic terrorists. Where, before, he used to pander to them when they attacked Israelis and Jews, including Arafat, now Powell also panders to the terrorists who attack Americans.

Thank G-d Colin Powell never got to be President. But even though he’s just a political has-been and private citizen now, by the amount of attention the Mainstream Media give his every utterance, you’d think he is President.

And the current guy occupying 1600 Pennsylvania Avenue was too dumb to know this guy wasn’t on his side. Or America’s.

Remember, I wrote this almost 1.5 years ago, and the Colin Powell column I wrote from which IÂ reprinted excerpts yesterdayÂ wasÂ written and published in April 2001. The more things change, the more they stay the same. That’s why Powell’s endorsement of Obama is hardly a shocker or even news.

So, two prominent liberal Black politicians go into a bar . . . .

It reads like a joke. But the punchline is that one of them, Colin Powell, endorses the other for the White House. 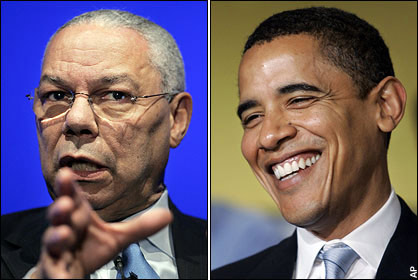 As I’ve always noted, Colin Powell was a liberal and has been a fan of skin-color-based affirmative action, from which he’s benefited his entire life. Skin color, in no short measure is why he became a General, why he got promoted to the top of America’s military, why he was chosen for a key role in both Bush, father and son, administrations, and why he was given a coveted position on AOL’s board, which made him an instant gazillionaire, once his son (also benefitting from Bush-based affirmative action) approved the deal as head of the FCC. It certainly wasn’t his foreign policy, which was anti-Israel, pan-Arabist, and liberal, liberal, liberal. As I’ve always noted, as Secretary of State, Colin Powell was “Madeleine Albright Minus the Skirt” . . . and lipstick . . . and ugly brooches.

Powell was never a Republican. He benefited from positions in Republican administrations. There’s a difference.

Is Colin Powell Madeleine Albright in Republican clothing?As Secretary of State, he’s acting more like her everyday. Minus the lipstick and ugly brooches.

That should trouble anyone disgusted by Clinton’s Keystone Kops foreign policy conducted by the secretary of state in a skirt.

Albright loved being a celebrity and its associated trappings. . . .

The Czechoslovak-born Albright even had the gall to push for amending the Constitution so foreign-born Americans — particularly herself — can run for president. Indeed, she is Mad (-eleine Albright).

It’s as mad as Powell’s claim he’s a long-time Republican. In his 1995 best-selling autobiography, “My American Journey,” Powell said he is liberal on many issues. “Neither of the two major parties fits me. … The time may be at hand for a third major party to emerge.” “I admire … Bill Clinton.” During Clinton impeachment hearings, Powell’s daughter Anne got a coveted audition for co-host of ABC’s “The View,” during which she vehemently attacked Republicans and conservatives and stood up for Clinton and his private life. You can bet the young Powellette apple didn’t fall far from the tree. Her sister played a proud lesbian in an off-Broadway play, with Papa Powell gushing to the media.

Powell shares Albright’s taste for celebrities. But, even worse than attending their concerts, he’s consulting them on foreign policy. In March, he met for an hour with U2’s Bono about forgiving tax-funded loans to third-world nations. Wednesday, he met with Paul McCartney and girlfriend/model Heather Mills about their anti-landmine campaign. That’s supposed to be a defense issue. Apparently, one must be a has-been UK pop star to advise Powell on U.S. foreign policy. Who’s next, Elton John?

Then, there’s Powell’s Albrightesque behavior toward Israel. A Palestinian-sponsored torrent of terrorist bombings, shootings, and warfare now faces Israel on a daily basis. In the tradition of U.S. peace through strength defense policy, Israel responds, attacking those Palestinian installations fomenting the violence. And what does Powell do? He attacks Israel as “overreacting.” In Powell’s world, Israel should just accept the cold-blooded murder of its civilians within its own borders. Could this be connected with the $200,000 in speaking fees he accepted in November from the pro-Syrian, anti-Israel Lebanese Deputy Prime Minister Issam Fares? Powell already knew he’d be Bush’s Secretary of State when he delivered the paid Tufts University address, a huge conflict of interest.

Powell’s policies are no surprise. He’s the same guy who opposed the Gulf War. Being a “great military mind,” Powell opposed the engagement, predicting we’d badly lose in a ground war. As Chairman of the Joint Chiefs of Staff, he and Albright pushed Clinton for military involvement in Kosovo. . . .

There’s a difference between Albright and Powell. A noxious presence, she did not carry Powell’s heavy conflict-of-interest baggage. In addition to questionable speaking fees, Powell was a large stockholder in America Online (AOL), sitting on its board. His son, Michael, now FCC Chairman, voted to approve the AOL-Time Warner merger, earning pops millions in increased stock option value when he exercised them. Now at State, Powell brought in crony AOL Time Warner Chairman Steve Case to consult and install State’s new computer system. All without a competitive bidding process. Suddenly, Powell is against sanctions, which he so adamantly supported during the Gulf War. Interesting, since Case wants to expand AOL’s empire to U.S.-embargoed nations. It’s not the only conflict of interest for the Powell family. Daughter Anne was suddenly named co-host of AOL Time Warner’s TBS network’s “War Games” show, while brother Michael regulates the company at FCC. The Powells are well-connected.

Which is why Powell, an Albright-clone, got the job. Sounding like Hillary, Laura Bush told Larry King, on Wednesday, that she helped Bush pick his advisers and staff. She said she was “proud that a lot of women are at the table.” Apparently Bush has a Clintonesque affirmative action staffing policy.

Clinton picked Albright because she was a woman. Did Bush — or his wife — pick Colin Powell merely because he’s black?

Unless it’s a mutual affinity for Beatles’ political advice, it sure seems that way.

Bottom line: If you liked Madeleine Albright’s foreign policy, you’ll love Barack Obama’s. Colin Powell will be one of his top advisors, even if it’s not in an official capacity.

3 thoughts on “McCain or Obama: either one will have a Powell on the white house payroll”