Iranian Paper Shut Down for Obama Cover:Â “Why doesn’t Iran have an Obama?”

* Thou shalt not have other Ahmadinejads besides me:

A Tehran news weekly was shut down by Iranian President Mahmoud Ahmadinejad last week after featuring President-elect Barack Obama on its front cover and asking the question, “Why doesn’t Iran have an Obama?” 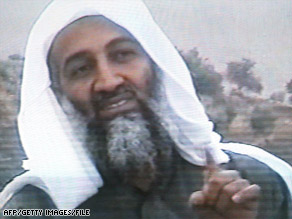 Osama bin Laden remains on the run despite a $25 million reward for his capture.

WASHINGTON (CNN)Â — U.S. intelligence agencies believe Osama bin Laden is isolated from al Qaeda and spending much of his energy merely surviving, the head of the CIA said on Thursday.

“In fact, he appears to be largely isolated from the day-to-day operations of the organization he nominally heads,” he said.

In recent weeks, there have been several U.S. missile strikes by unmanned drones around the Afghanistan-Pakistan border.

The United States maintains that Taliban and al Qaeda forces operate with relative impunity in tribal areas along Pakistan’s border with Afghanistan and use those areas as staging grounds to attack U.S. forces and their allies inside Afghanistan.

Hayden saidÂ al QaedaÂ has been hurt by a sustained fight with the United States and its allies, but remains a threat.

“Al Qaeda has suffered serious setbacks, but it remains a determined, adaptive enemy unlike any our nation has ever faced,”Â HaydenÂ said. “The war is far from over.”

Regardless of whether bin Laden is actively helping lead the terrorist organization, the CIA believes capturing or killing him would be a huge blow to al Qaeda, according to Hayden.

“This is an organization that has never been through a change at the top,” he said. “For 20 years,Â bin LadenÂ has been the visionary, the inspiration or harmonizing force behind al Qaeda.”

Hayden said it remained to be seen whether bin Laden’s deputy, Ayman al-Zawahiri, could maintain unity in the ranks without him.

“The truth is, we simply don’t know what would happen if bin Laden is killed or captured. But I’m willing to bet that whatever happens, it would work in our favor,” Hayden said.

We Arabs are the Epitome of Racism’Â Â (MEMRI)
A rare message of common sense from the heart of the Arab world.