* Family of dead jihadist: “he was only interested in his religion…” 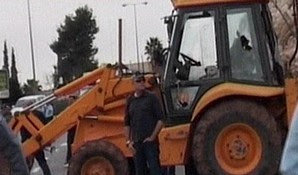 You would think afterÂ last summerÂ no one would allow an Arab behind the wheel of a tractor orÂ bulldozerÂ in a city in Israel. You’d be wrong. This afternoon, yet another ‘Palestinian’ terrorist purposely drove a bulldozer into other vehicles on a Jerusalem road. This time it happened near the Malcha Mall, where the Menachem Begin highway ends, at Golomb Boulevard. It’s an intersection my two young sons pass each morning on their way to school. Thankfully, this time a taxi driverÂ shot and wounded the terroristÂ immediately, and only two police officers – whose car was flipped over by the bulldozer – were lightly wounded.

Two police officers were wounded in Jerusalem shortly after 1:00 p.m. when an Arab-driven tractor plowed into their vehicle. The officers, though hurt, fired at the terrorist, as did a civilian, and the terrorist was mortally wounded.

Family of Jerusalem tractor jihadist: he was “a normal person who did not hold extremist views”

He plowed into a police car and was apparently also trying to hit a bus. But it was an accident, you see, and he was a “moderate.”

And there was an open Qur’an in the glove compartment.

Of course,Â everyÂ time a Muslim commits a jihad attack, we hear from his family and friends about how he was just a regular guy, a gentle soul, wouldn’t hurt a fly, and they’re shocked, shocked, by this incident. Just once it would be refreshing to hear the uncle or cousin of a jihadist admit it all and say something like, “Yes, he did this because he totally hated Jews and Christians and wanted to kill them, as per the Qur’an’s instructions to wage war against unbelievers.” Â (that admission usually follows a few days later, when that dreaded ‘backlash’ doesn’t happen and the Muslims feel safe from infidel reprisals…/ed)

An update onÂ this story. “Tractor driver’s family: He was not an extremist,” by Ali Waked forYnet News,Â

Details are still sparse, but it appears that the terrorist first tried to ram into a bus, which was empty at the time. He then turned his attention to the policemen. Other reports say the terrorist pushed the police vehicle into the bus, and then tried to hit other vehicles when he was shot.

The policemen were taken by ambulance to a nearby hospital, where they are listed in light condition.

The incident occurred at a busy intersection in southern Jerusalem, where the Menachem Begin Highway meets Eliyahu Golumb Blvd., not far from Teddy Stadium and the popular Malcha Mall.

Yes, that’s the bulldozer at the top of this post.