Which no doubt is why the agency’s own civil-rights division raised red flags over some of the language in the report — only to see Napolitano release it anyway.

And it’s particularly slanderous of the brave Americans who’ve fought in Iraq and Afghanistan, and who — or so DHS claims — are thus susceptible to recruitment by violent extremists because they’re “facing significant challenges reintegrating into their communities.”

Shades of the 1960s, when similar slanders were aimed at Vietnam vets.

At least then the left didn’t pretend to “support the troops” like it does today — every paranoid, gun-toting, right-wing-militia-loving one of them.

And what’s the factual basis for this supposed threat posed by returning vets?

Well, as Napolitano herself put it: “I was the United States attorney for Arizona in the ’90s whenÂ Timothy McVeighÂ bombed the Murrow building in Oklahoma City and unfortunately he was a vet — that’s where he got his training.”

And that’s it. One single disaffected former soldier, among more than 42 million Americans who’ve donned the uniform.

As David Rehbein, national commander of the American Legion, put it: “That’s as unfair as usingÂ Osama bin LadenÂ as the sole example of Islam” — and we now how the Obama administration feels about that.

In fact, an FBI report on “White Supremacist Recruitment of Military Personnel Since 9/11” found all of 19 people claiming to be vets of Iraq or Afghanistan who’d been connected to extremism between 2001 and 2008.

And even that minuscule number may be inflated: The FBI noted that some of them “may have inflated their resumes with fictional military experience to impress others within the movement.”

Napolitano defends her agency’s paranoid warning of right-wing crazies poised to launch a coup d’etat by pointing to a similar DHS report earlier this year on left-wing extremists. But that report warns only about the potential for cyber attacks — a far cry from the so-called “violent” threat posed by the right.

President Obama needs to disavow this nonsense — and either set his DHS secretary straight or send her back to Arizona. 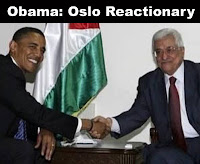 I wonder if this is something else he promised when heÂ bowedÂ to King Abdullah at the G-20 in London.

President Obama has hidden a supplemental $200 million for the ‘Palestinian Authority’ in a ‘supplemental budget’ for American troops in Iraq and Afghanistan. By putting the money there, it is less likely to be subject to congressional scrutiny. Given that Obama originally wanted to give the PAÂ $800 million, I suppose we shouldn’t complain too much.

Given that (a) in the past, money given to Fatah has been used to pay Hamas salaries, (b) money wasÂ last transferred to GazaÂ for that purpose in February, which means that theÂ quarterly salariesÂ are due, (c)Â at least 40%Â of the ‘Palestinian Authority’s ‘budget’ is spent in Gaza, and (d) the Netanyahu government is a lot less likely than its predecessor to transfer cash to Gaza, my guess is that a major chunk of this money is going to Gaza for ‘salaries.’

But Omri at Mere Rhetoric has lots of interesting speculation about other ways the ‘Palestinian Authority’ may spend the money, along with some ways in which the American budgetary process is being used to hurt Israel, and you should definitelyÂ read the whole thingÂ (Hat Tip:Â Gateway Pundit).