The Palestinian Authority on Sunday launched a scathing attack on the US Ambassador to the United Nations, Nikki Haley, dubbing her an “ambassador of animosity, hatred and dark ideology,” after she blocked a UN condemnation of Israel.

Earlier this year, senior PLO official Saeb Erekat, in an interview with a Palestinian news website, advised Haley to “shut up.” (More below the fold). TEL AVIV – The Hamas terror group sent a seven-year-old girl to the Gaza security fence during violent riots on Friday, the IDF said.

“When the IDF troops realized it was a girl, they picked her up and made sure that she could get back to her parents safely,” the army said.

“Hamas cynically uses women and children, sending them to the fence and endangering their lives,” the statement continued.

The IDF’s Arabic spokesperson Lt. Col. Avichay Adraee told Gazans that Hamas was exploiting them by “putting them in danger.”

The Times of Israel reported in another article that “Palestinian” “rioters threw rocks and firebombs at Israeli troops on the other side of the fence, burned tires and scrap wood, sought to breach and damage the security fence, and, in at least one case, opened fire at Israeli soldiers.”

Then they run to the UN to secure victimhood status. It has worked for years. But now, there is Trump, and Nikki Haley. (JW) TEL AVIV – The U.S. on Saturday blocked the UN Security Council from issuing a resolution expressing “grave concern” over Israel’s handling of Hamas-planned riots along the border with Gaza and calling for an “independent and transparent investigation” into the violence.

The draft statement, presented by Kuwait, expressed “the right to peaceful protest” and the council’s “sorrow at the loss of innocent Palestinian lives.” It takes one to know one.

Nonwhite Countries refusing to take back their Citizens from Germany Pakistan, India, Nigeria, and several other nonwhite countries are effectively refusing to take back their fake asylum-claiming citisenz from Germany by refusing to issue them with new identity documents, it has emerged.

Migration & settlement in the dar-al harb are most meritorious for Mohammedans.  People who are prepared to lie, to deceive & murder for their religion will not be deterred by infidel laws.

Both Israel and the Palestinians were called upon to “exercise restraint and prevent a further escalation,” the draft said.

It also called on the sides to work towards peace based on the two-state solution.

The Palestinian Authority on Saturday charged the U.S. and Britain with preventing Arab efforts to issue a Security Council resolution condemning Israel for the 16 Palestinians killed during the clashes.

Their refusal meant the U.S. and Britain were “accomplices in the horrific massacre committed by the Israeli occupation army against our defenseless people,” spokesperson for the PA Yusef al Mahmoud  said.

He added that Washington and London showed “bias in favor of oppression and suppression.” He also claimed that the protests were “peaceful marches and demonstrations” commemorating Land Day.

Israel was “directly responsible for this dreadful massacre, which resulted in 16 martyrs and hundreds of wounded.”

Another spokesman for PA President Mahmoud Abbas, Nabil Abu Rudeineh, said the U.S. was “providing a cover for Israel to continue its aggression against the Palestinian people.”

The U.S. and its envoy Nikki Haley, he said, “encourages Israel to defy UN resolutions aimed at ending its occupation.”

The Security Council summoned a closed meeting on Friday night to discuss the situation, ignoring a request from the US and Israel to postpone the meeting until Saturday because of Passover.

The following day UN Secretary-General Antonio Guterres called for “those concerned to refrain from any act that could lead to further casualties.” He also said there should be an independent and transparent investigation into the deaths and injuries during Friday’s clashes.

Defense Minister Avigdor Liberman dismissed the idea of cooperation in any investigation, saying the calls for a probe were “hypocritical.”

He added that the protests were not a “Woodstock festival.”

At least 10 of the 16 Palestinians killed were identified as members of terror groups, the IDF said Saturday.

The army published a list of the terrorists along with their positions in various terror groups – with eight of them coming from Hamas. The riots saw rocks and Molotov cocktails hurled at Israeli soldiers along the border from a crowd of some 30,000 Gazans attempting to storm the fence. There was an instance of live fire as one rioter shot at IDF troops.

The “March of the Return” was initially billed as a “non-violent” protest that organizers promised would take place a half-mile away from the border fence, with no attempts to breach it.

The IDF responded mainly with tear gas and rubber bullets, and only rioters who explicitly used violence against troops or who were seen damaging or breaching the security fence were targeted with live fire, the army stated.

Some of the terrorists who were killed were said to have attempted to place bombs along the security fence.

Friday’s “day of rage” coincided with both Passover eve and Palestinian Land Day, which marks events in 1976 that reflect the Palestinians’ struggle to own the land. The protest will be ongoing until May 15’s Nakba Day – the day of “catastrophe” that marks the establishment of the State of Israel. The latest attack on Haley is another sign of the continued crisis between the PA leadership and the US administration, which erupted immediately after President Donald Trump’s December 6 announcement recognizing Jerusalem as Israel’s capital.

It follows several verbal attacks by PA President Mahmoud Abbas on US envoy to Israel David Friedman, including calling him a “son of a dog” and a “settler,” using both terms as insults.

Since the Jerusalem announcement, the PA has been boycotting representatives of the Trump administration.

“Haley’s attempt to justify Trump’s decision on Jerusalem by calling it an internal US issue makes her appear as a representative of the right-wing parties ruling Israel,” the PA ministry charged on Sunday.

Haley’s powerful and public support for Israel at the UN and other forums in recent months has turned her into a target of frequent attacks by PA officials.

Earlier this year, senior PLO official Saeb Erekat, in an interview with a Palestinian news website, advised Haley to “shut up.”

Sunday’s statement from the PA ministry also took Haley to task for blaming the Palestinians for the current stalemate in the peace process and for her “incitement” against Abbas.

In a speech before the UN Security Council in February, Haley said, addressing Abbas: “The United States stands ready to work with the Palestinian leadership. Our negotiators are sitting right behind me, ready to talk. But we will not chase after you. The choice, Mr. President, is yours.”

The US, she added, will not “chase” the Palestinians to bring them back to the negotiating table with Israel.

Haley also responded to Erekat’s “shut up” remark. “I will decline the advice I was recently given by your top negotiator Saeb Erekat,” she said. “I will not shut up. Rather, I will respectfully speak some hard truths.” 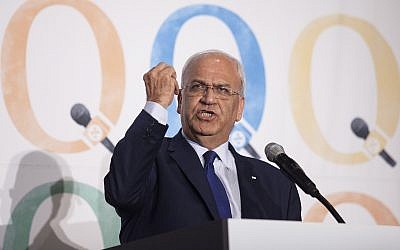 Haley told the Palestinians they had two choices: either go on a “path of absolutist demands, hateful rhetoric, and incitement to violence” or a “path of negotiation and compromise.” The latter, she said, “remains open to the Palestinian leadership if only it is courageous enough to take it.”

“You can choose to denounce the United States, reject its role in peace talks, and pursue punitive measures against Israel in international forums like the UN. I assure that path will get the Palestinian people exactly nowhere toward the achievement of their aspirations,” she added. “Or you can choose to put aside your anger about the location of our embassy and move forward with us toward a negotiated compromise that holds great potential for improving the lives of the Palestinian people.”

The PA ministry statement on Sunday accused Haley of engaging in “lies and misinformation” and said it was doing everything possible to get the peace process back on track.

The PA statement claimed that the US administration has thus far failed to make any proposal to the Palestinians that would pave the way for the resumption of a “real” peace process.

“Haley’s attack on President Abbas, whose positions reflect the Palestinian national consensus and Palestinians’ higher interests, comes in the context of the aggression and incitement waged by the US administration against the Palestinian people and their rights, with the aim of subjugating them and forcing them to surrender,” the PA ministry charged.

“Haley’s positions and statements come in the context of her desperate attempts to whitewash the occupation and mislead international public opinion with a series of lies. This reflects either total ignorance of the reality of the conflict, or a blind ideological bias in favor of the occupation, which is the closest to the truth.”