He’s schizophrenic. This pope is a nightmare. He sucks the toes of Mohammedan invaders and denies their motives, like “authentic islam and a proper reading of the koran are opposed to every form of violence”, then he blames the West for “murderous indifference” when Mohammedans in the M.E. slaughter the Christians.

These are odd statements coming from Pope Francis, a world-class Islamopanderer; notice that he said nothing about who was doing the persecuting, and implied that it was the fault of powers outside the Middle East. The Catholic Church as a whole has committed itself to Islamopandering, such that it is largely silent about the Muslim persecution of Christians that has taken place in the Middle East. Why? The Catholic Church is following Pope Francis’ lead, and Francis has said: “Christian terrorism does not exist, Jewish terrorism does not exist, and Muslim terrorism does not exist. They do not exist.” And he has also said: “Authentic Islam and the proper reading of the Koran are opposed to every form of violence.”

This has had a terrible influence upon the Catholic Church, and aids and abets the Western political and media elites in their determination to cover up the Muslim persecution of Christians. Jean-Clément Jeanbart, the Melkite Greek Catholic Archbishop of Aleppo, gave an interview to a French reporter in which he was highly critical of the mainstream media and even of his fellow bishops for ignoring the Muslim persecution of Middle Eastern Christians. “The European media,” he charged, “have not ceased to suppress the daily news of those who are suffering in Syria and they have even justified what is happening in our country by using information without taking the trouble to verify it.” And as for his brother bishops in France, “the conference of French bishops should have trusted us, it would have been better informed. Why are your bishops silent on a threat that is yours today as well? Because the bishops are like you, raised in political correctness. But Jesus was never politically correct, he was politically just!”

Archbishop Jeanbart was not the first to say this. “Why, we ask the western world, why not raise one’s voice over so much ferocity and injustice?” asked Cardinal Angelo Bagnasco, the head of the Italian Bishops Conference (CEI). Syriac Catholic Patriarch Ignatius Ephrem Joseph III Younan himself has in the past appealed to the West “not to forget the Christians in the Middle East.” The former Melkite Greek Catholic Patriarch Gregory III has also said: “I do not understand why the world does not raise its voice against such acts of brutality.”

But Gregory III should have understood, since he was a major part of the problem. He himself said: “No one defends Islam like Arab Christians.” It is to defend Islam that Western clerics do not raise their voice against such acts of brutality. It is to pursue a fruitless and chimerical “dialogue” that bishops in the U.S. and Europe keep silent about Muslim persecution of Christians, and enforce that silence upon others. Robert McManus, Roman Catholic Bishop of Worcester, Massachusetts, said it on February 8, 2013 as he was suppressing a planned talk at a Catholic conference on that persecution: “Talk about extreme, militant Islamists and the atrocities that they have perpetrated globally might undercut the positive achievements that we Catholics have attained in our inter-religious dialogue with devout Muslims.”

Remember that Mohamed Atta, about the plane he had hijacked on September 11, 2001, told passengers over the intercom: “Stay quiet and you’ll be OK.” The Catholic Church appears to have adopted that statement as its policy regarding Muslim persecution of Christians. 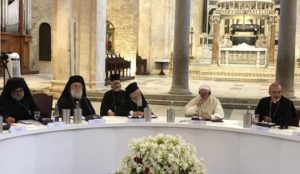 Pope Francis on Saturday denounced the “murderous indifference” that has allowed violence to consume the Middle East and drive tens of thousands of Christians from their homes, calling out global powers for seeking power and profit at the expense of the region’s people during a remarkable gathering of Orthodox patriarchs and Catholic leaders.

Francis hosted the daylong ecumenical service in the Adriatic port city of Bari, considered a religious bridge between East and West and home to the relics of St. Nicholas, an important saint in the Orthodox Christian world.

Francis greeted the patriarchs outside the Basilica of St. Nicholas and together they descended to the crypt to pray before the relics and light a flame for peace symbolizing the unity of Christians divided by over 1,000 years of schism.

“We commit ourselves to walking, praying and working together, in the hope that the art of encounter will prevail over strategies of conflict,” Francis said at the end of the encounter as children released doves of peace….

Francis denounced the “occupation” of Mideast lands, and renewed his appeal for a two-state solution to the Israeli-Palestinian conflict.

“So many conflicts have been stoked too by forms of fundamentalism and fanaticism that, under the guise of religion, have profaned God’s name – which is peace – and persecuted age-old neighbors,” he said.

Denouncing the weapons trade that fuels the region’s wars, he urged global powers to stop their “thirst for profit that surreptitiously exploits oil and gas fields without regard for our common home, with no scruples about the fact that the energy market now dictates the law of coexistence among peoples!”

The meeting was the first of its kind, gathering most of the Middle East’s Orthodox patriarchs with the head of the 1.2-billion strong Catholic Church as well as Lutheran leaders and their Christian representatives in the Holy Land. After the public prayer on Bari’s seafront, the black-draped patriarchs and white-cassocked pope met in private inside the basilica and then lunched together, moving around Bari in a bus as if on a school field trip.

In his opening prayer, Francis said the Middle East represented the source of Christianity, where ancient Christian rites and heritage are preserved and where “our very souls are rooted.”

And yet, in recent years the region has been “covered by dark clouds of war, violence and destruction, instances of occupation and varieties of fundamentalism, forced migration and neglect,” he said.

“All this has taken place amid the complicit silence of many,” he lamented. “The Middle East has become a land of people who leave their own lands behind.”

In a service punctuated by Arabic chant, Aramaic prayer and Catholic hymn, Francis said the Orthodox and Catholic leaders wanted to give voice to those who have none.

“Indifference kills, and we desire to lift up our voices in opposition to this murderous indifference,” he said. “For the Middle East today is weeping, suffering and silent as others trample upon those lands in search of power or riches.”

Among the patriarchs on hand was the spiritual leader of the world’s Orthodox Christians, Ecumenical Patriarch Bartholomew I, as well as patriarchs from ancient churches of Alexandria, Antioch and Jerusalem. Notably absent from the gathering was Patriarch Kirill, head of the Russian Orthodox Church, which has been a strong supporter of Russian President Vladimir Putin’s military intervention in Syria….