Irish Muslim Board call for Islamic dress codes by allowing girls to wear full-length skirts, long-sleeved shirts & headscarves- while at the same time requesting for clothes w crucifixes to be made ‘optional’ in interests of creating ‘greater inclusivity’ 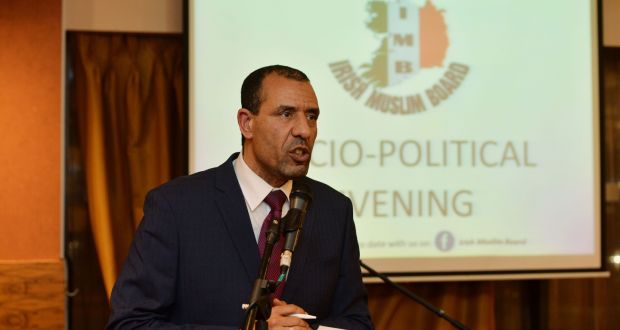 Dr Ali Selim of the Irish Muslim Board: the group says Muslim children can feel alienated at school, particularly in activities that revolve around Christmas such as nativity plays and carol services. Photograph: Alan Betson

The recommendations are contained in the board’s submission to a Department of Education consultation process over school admission policies.

The group, chaired by Dr Ali Selim, was formed in 2016 to encourage Muslims to become more politically active.

While there are two Muslim primary schools in Dublin, the community does not have a secondary school.

It recommends that schools should take greater steps to include Muslims, such as accommodating the “Islamic religiously mandated code of dressing, deemed to be an essential component of their Muslim identity”.

“Muslim girls should be allowed to wear full-length loose school skirts or loose trousers, a long-sleeved shirt and a headscarf to cover their hair.

“Schools have the right to specify the colour and the style of scarf for reasons of uniformity . . .”

It adds that school uniforms which have the crucifix symbol or other religious symbolism should be made optional.

“The school uniform should be a reflection of the school’s inclusive policy for creating a cohesive atmosphere at school where every student feels valued and contributions and suggestions of all kinds are welcome.”

In addition, the group said school assemblies in faith-based schools could be made more inclusive by recognizing aspects of the Muslim faith.

For example, schools could introduce Ramadan-based themes at assembly such as a communal breaking of the fast, when pupils, teachers and community members could eat together.

In addition, it says schools could enter into the charitable spirit of Ramadan by raising funds for the poor and needy.

In a separate submission, the Muslim Primary Education Board – which represents Dublin’s two Muslim primary schools – says parents were finding it increasingly difficult to secure school places for their children at second level.

It says anecdotal evidence indicates that the “Baptism barrier” is adding to these difficulties.

“While it has been stated that the number of children refused because of lack of baptismal certificate is small . . . this does not take into account the parents who do not apply for admission into schools that they know may ask for a certificate.

“The situation at present is that the majority of schools in Ireland have a Catholic ethos, leaving Muslim children at the mercy of these admission policies, and are seriously curtailing parents and students’ choice.”

This inequality of access, it states, may lead to the social, economic and civic exclusion of Muslims in Ireland.

“Those schools which have more open admission policies are left to cater for large groupings of Muslim students instead of encouraging integration across the school system.”

One thought on “Ireland: out with Christianity, submit to Islam, in the name of inclusivity!”