“As it unfortunately happens in any part of the world after a terrorist attack carried out by Islamist groups, the immediate consequence is a backlash against the Muslim community.”

That’s a false claim. There is media handwringing about a backlash against Muslims after every jihad massacre, but hardly ever is there an actual backlash.

There is no justification for attacks against innocent Muslims, anywhere at any time, or attacks on any innocent people. The concern after a massacre of Christians by Muslims, however, should be on how the victims can be protected against further such attacks. Carmen Aguilera-Carnerero’s analysis here reflects the establishment media’s ironclad rule: whenever non-Muslims attack Muslims, Muslims are the victims. And when Muslims attack non-Muslims, Muslims are the victims. Her remarks here are part of the larger practice of ignoring the ways in which jihadis use the texts and teachings of Islam to incite violence (and charging those who do look into this with “Islamophobia,”) and pretending that Muslims are being victimized worldwide, which is false. 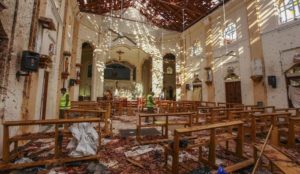 On April 21st, 2019 eight explosions happened all through the island of Sri Lanka almost simultaneously. The explosions specifically targeted the West via luxury hotels and Christian churches where the Easter Sunday services were being celebrated.

The number of casualties eventually reached 253 and (unusually) 48 hours later, the Islamic State claimed the authorship of the attack in collaboration with members of a local extremist organization, the National Thowheeth Jama’ath.

The socio-political and emotional chaos provoked by a massacre of this magnitude was as expected as unwanted, ranging from the unbelievable links politicians wanted to find to explain the disaster to the high number of scapegoats searched, found and used as a mere distraction strategy to give citizens the fake impression of having assumed responsibilities. Then came the questions of the inaction of a government that had been previously warned of the radical extremist behaviour of the National Thowheeth Jama’ath by the Muslim local community several times in the last years as well as the information about the possibility of a terrorist attack by the intelligence services. But it was too late, way too late.

As it unfortunately happens in any part of the world after a terrorist attack carried out by Islamist groups, the immediate consequence is a backlash against the Muslim community. This is the latent islamophobia nesting in those who are waiting for any tragedy to happen as if the horror begot by a few would legitimate them to spread their hate. The main victim of ISIS is primarily the Muslim community. obviously not talking here of the religion of the individual casualties.-not any kind of differentiation is needed then, but what I mean is the aversion and stigmatisation the Muslim community suffer systematically as a direct result of the terrorist actions of a few….