The truth will out. The French gov’t has forbidden the media to publish the numbers of the annual car-b-cues, for fear it will only encourage the soldiers of allah to burn even more. It’s not working, as you can see: 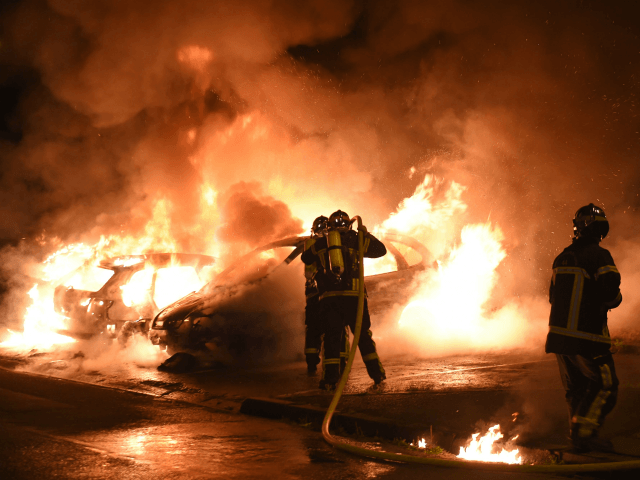 France saw 1,457 vehicles set on fire across New Year’s Eve, surpassing the previous record of 1,290 vehicles torched across the country in the previous year, according to figures seen by French radio broadcaster Europe 1.

The figures show a 13 per cent rise in the number of car burnings from 2018, with French police allegedly attempting to keep the number of burned cars under secrecy so as not to “create an escalation”, Europe 1 reports.

French authorities have gone on record claiming that the burnings over the New Year period in 2019 were substantially less serious than the previous year and said that the number of violent incidents towards police had also decreased compared to those that occurred in 2018.

Crowds in Paris chant "Revolution"
They want Macron gone and out of the EU.#Frexit

In previous years, the French authorities also remained largely silent on the official car burning figures, and when figures were reported, such as in 2017, the Interior Ministry only counted cars that were directly set on fire and not those that had received damage as a result of fires.

Past figures show that since a low point of 804 burned cars in 2016, the number has risen year on year with 2019’s figures higher than all other years since 2008.

While French authorities remain officially quiet about the figures, signs in some cities, such as Strasbourg where 220 cars were set on fire in what amounted to double the number of 2018, revealed that the problem of car burnings was still a major issue for French police and governments.

Strasbourg also saw several incidents of firefighters being attacked on New Year’s Eve after being ambushed, with Thierry Carbiener, president of the Departmental Fire and Rescue Service, describing the youths as “ultra-violent, in organised bands”.

“We are dealing with very mobile groups that light fires for the sole purpose of seeing the firefighters and the police arrive and confront them. We have reached a milestone: they no longer target vehicles but men. They act to hurt them,” he said.

A total of 400 people were arrested over New Year’s Eve in France and a 27-year-old man was killed as a result of an accident involving fireworks.

Macron caves in: French government offers to scrap plan to raise pension age to 64 after weeks of rioting and crippling strikes – as Paris burns yet again

The government on Saturday offered to withdraw the most contested proposal that would in effect have raised the retirement age by two years.

‘To demonstrate my confidence in the social partners… I am willing to withdraw from the bill the short-term measure I had proposed’ to set a so-called ‘pivot age’ of 64 with effect from 2027, Prime Minister Edouard Philippe wrote in a letter to union leaders a day after they met seeking to end the labour action, now in its 38th day.