Leftist hacks continue to warn viewers that “the entire story looks like a Russian intelligence op.” 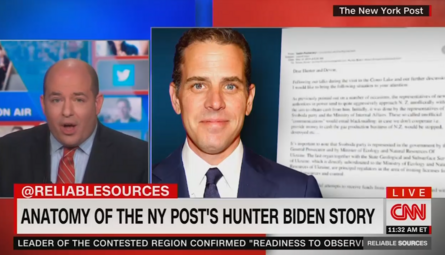 The media have been defending Biden and his son from the President’s attacks for as long as Trump has been making them. Just over a year ago, when allegations surfaced that Biden had interfered in Ukrainian politics for personal gain, journalists and reporters insisted tirelessly that there was “no evidence” that the former Vice President “had done anything wrong.”

As election day draws near, the pro-Biden media have grown even more shameless in protecting their candidate. Evidently their latest defense is to conceal the intelligence community’s own assessment from voters and dismiss the entire scandal as Russian propaganda.

Only dishonest #FakeNews trash like @CNN would deny the obvious election interference by @Twitter and @Facebook! Why aren’t journalists at @CNN all over this Hunter Biden laptop story! Why do you want a complete crook who’s owned by foreign countries to be President?