The main victim of the sex-ring gang had said it was a disgrace the Government had failed to kick the criminals out of the country after Abdul Rauf, 51, was pictured buying food and drinks in Rochdale. 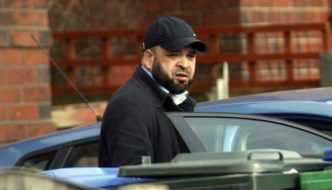 UK: Victim of Muslim migrant rape gang ringleader demands he be deported (he was ordered deported six years ago)
.

This is no surprise. The Home Office some time ago banned Martin Sellner, Brittany Pettibone, Lauren Southern and Lutz Bachmann from entering, all for the crime of opposing jihad terror and Sharia oppression, and thereby made it clear that it is more authoritarian and unwilling to uphold the freedom of speech than ever – at least when it comes to criticism of Islam, Muslim rape gangs, and mass Muslim migration.

UK: Over 130 imams and Islamic scholars urge Johnson to condemn showing of ‘blasphemous’ cartoons in school

The UK has granted asylum to Yasser Al-Sirri, a convicted jihad terrorist who advocated violent jihad and the killing of Jews. The UK Home Office also admitted Shaykh Hamza Sodagar into the country, despite the fact that he has said: “If there’s homosexual men, the punishment is one of five things. One – the easiest one maybe – chop their head off, that’s the easiest. Second – burn them to death. Third – throw ’em off a cliff. Fourth – tear down a wall on them so they die under that. Fifth – a combination of the above.”

Theresa May’s relentlessly appeasement-minded government also admitted two jihad preachers who had praised the murderer of a foe of Pakistan’s blasphemy laws. One of them was welcomed by the Archbishop of Canterbury. Meanwhile, the UK banned three bishops from areas of Iraq and Syria where Christians are persecuted from entering the country. The asylum application of a Christian family facing a death fatwa in Pakistan was three times rejected. But an ISIS bride was let back in and given a taxpayer-funded house, despite the fact that she has an ISIS flag on her Twitter account. No terror charges for her, of course.

Meanwhile, Manchester jihad mass murderer Salman Abedi trained with a jihad group in Libya, and traveled in and out of UK with no problem.

The British government, in its abject pursuit of support from its rapidly growing Muslim community, has long ago left behind any commitment to basic human decency.