THE AUSTRALIAN CURRICULUM IS UNDER ATTACK BY RADICAL BUREAUCRATS AND POLITICIANS

Did you know the Australian Education Curriculum is being radically revised? This will have a huge impact on the way our children are educated. It’s important to act now to stand up for our western culture and Judeo-Christian heritage in schools and make sure it remains an integral part of the curriculum. We need to ensure that our kids get a good education, one which teaches them about their proud Judeo-Christian heritage that upholds values like human dignity – so they can be successful in life and not fall victim to radical ideologies like ‘woke’ identity politics

Stop radical bureaucrats and politicians from erasing history and brainwashing our kids.

Say NO to this proposed new curriculum that dumbs down maths, science, reading, civics and throws out the best of western culture, Australia’s Judeo-Christian heritage and your mainstream values – and indoctrinates children to become political activists.

Bolt: ‘A serious sickness of self-hatred has swept the West’

Sky News host Andrew Bolt says the serious sickness of “self-hatred” has “swept the West” and is taking the world back to the past, to tribalism and to violence.

“A current of hatred for the West, for the British legacy and its freedom, is taking the world back to the past – to tribalism and to violence,” he said.

Peta Credlin The Sunday Telegraph June 26, 2021
.
Despite nearly $60 billion of your money spent on them every year, our students’ academic performance against their peers from other countries has been plummeting for years based on standardised tests. As well, the marks required to enter teaching degrees are way lower than the marks required to enter almost all other professional degrees. Then there’s the politically correct insistence, brought in by Julia Gillard when education Minister, that every single subject, from French to physics to PE, be taught from an Indigenous, Asian or sustainability perspective – under the national curriculum – which shows what the educational establishment really thinks about our Judaeo-Christian ethic and the way our country has developed.
.
And despite being exposed this week as largely fabricated, Bruce Pascoe’s book Dark Emu looks likely to remain a fixture in classrooms and school libraries across the country.
.
In other words, we’ve been screwed again. Leftoids insist that we shouldn’t see the world for what it is, but for what “we would like it to be”.
.
Liberal and National NSW MPs last week voted down Mark Latham’s bill to remove it from schools, even though a new academic study says that it’s “poorly researched”, “distorts and exaggerates many old sources”, “contains a large number of factual errors”, and “selects evidence to suit the author’s opinions and ignores large bodies of information that do not”.
.
How is it that our schools are full of politically correct fiction masquerading as fact even after a decade of supposedly conservative government in NSW and eight years in Canberra? Essentially ministers are too timid or too ignorant to do their job.
.
Australia’s “Liberals” are in no way conservative. Turncoat said it loud & clear on a trip to England. Besides, anyone who remembers how the whole mob, Libs & Labs along with the Greens, celebrated homo “marriage” as if it was some kind of major achievement, should have learned it then. We are governed by a ship of fools.
So here’s something that should give some power back to parents and grandparents and won’t cost the taxpayer anything. Let’s mandate that every school publish on its website all its reading lists plus course materials too. 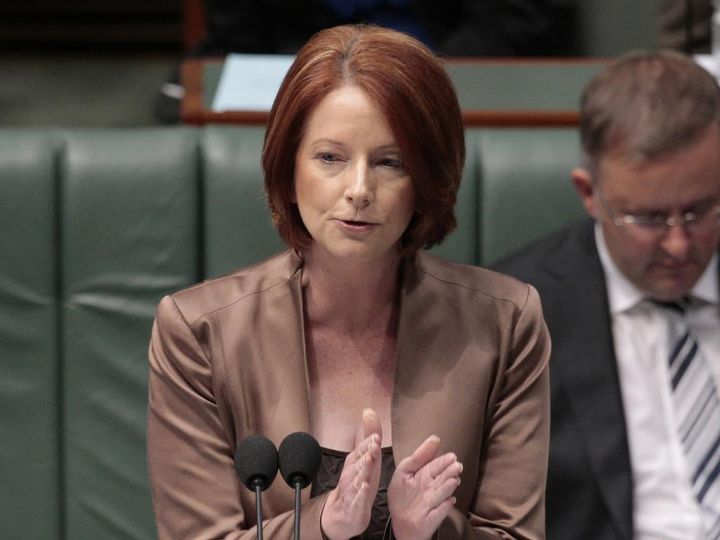 Policies developed by Julia Gillard when she was Education Minister have had a negative impact.
.
G- Lard was never elected, but the damage she did during her destructive time in office is almost irreversible. She was never brought to justice.