Australians have been suffering tremendously under our foul 18C laws, which are used to destroy people by dragging them through the courts. If ScoMo’s scam with internet censorship goes through, everything & everyone is fair game.

Watching the “Outsiders” this morning I was flabbergasted to see Rowan Dean interview creepy Barnaby Joyce, who, along with our weird PM ScoMo are now pushing for extreme censorship measures. I was totally blown away that there was not one objection from an otherwise hardballing journalist. Rowan Dean’s sidekicks also failed to ring the alarm bells. 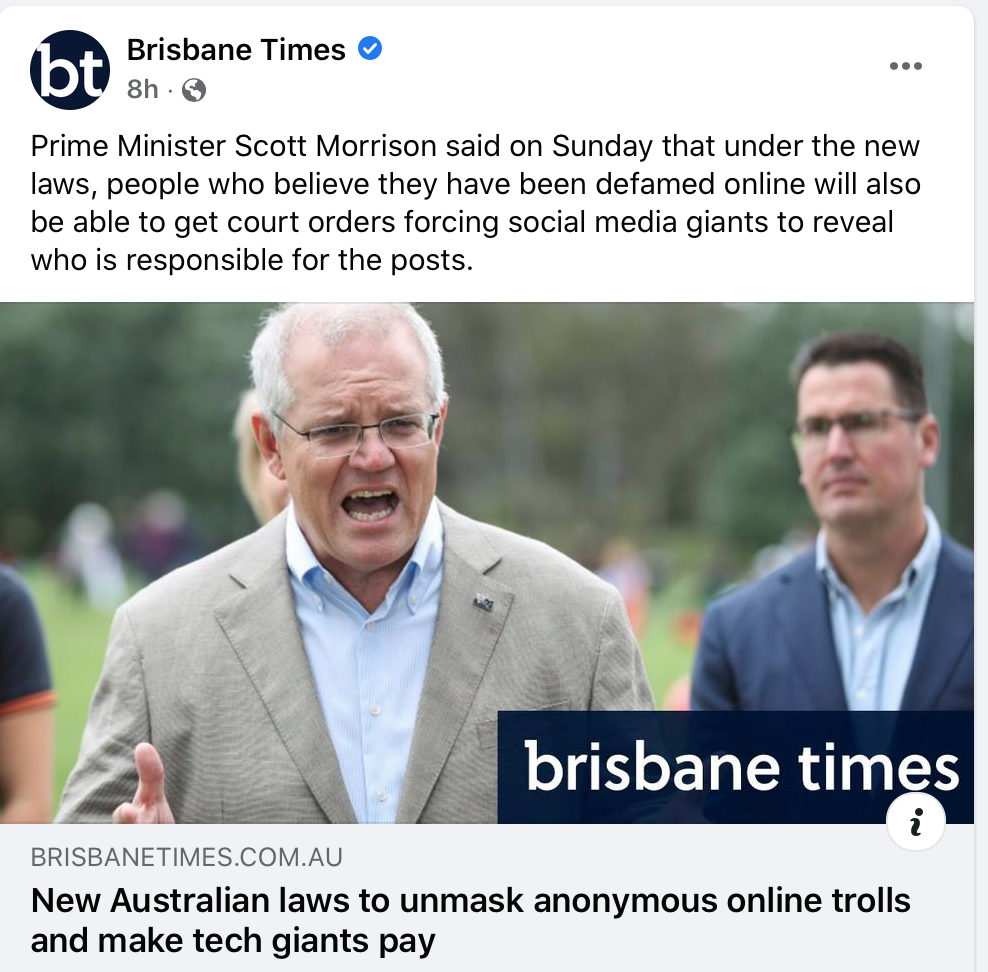 Anonymous online trolls will be unmasked in a new social media crackdown that will hand Australian courts the power to order tech giants to identify perpetrators or risk bearing the cost of defamation payouts themselves.

Prime Minister Scott Morrison said on Sunday that under the new laws, to be introduced to Federal Parliament, people who believe they have been defamed online will also be able to get court orders forcing social media giants to reveal who is responsible for the posts.

If the companies refuse or are unable to identify who made the defamatory comments, then they will have to pay the defamation costs.

Announcing the measures on Sunday, Mr Morrison said the internet should not be a “wild west where bots and bigots and trolls” can harm people without consequence.

He said women and children were the people most affected by anonymous bullying and defamatory abuse online and there needed to be a “quick and fast way” for people to raise these issues with the platforms and get it taken down.

“Free speech is not being allowed to cowardly hide in your basement and sledge … and harass people anonymously and seek to destroy their lives,” Mr Morrison said.

“That is cowardice — and there is no place for that in this country.”

Mr Morrison said the online giants needed to be held accountable for the world they had created, to ensure there was a “quick and easy” method for users to address harassment.

“They have that responsibility. They have created this world,” he said.

“They have created the space, and they need to make it safe, and if they won’t, we will make them laws such as this, and I will campaign for these all around the world as I have done on so many other occasions with Australia taking the lead.”

Social media giants will also have to establish online customer shopfronts in Australia to make sure they comply with orders as part of the measures.

The centrepiece crackdown on online trolls will be a change to the law to make it clear social media providers are responsible for payouts arising from defamatory comments on their platform where the troll cannot be identified.

The measures will force social media companies, such as Twitter and Facebook, to create a complaints scheme which will allow victims to know if comments were made in Australia and, if so, to obtain the contact details of the poster, with their consent.

If that is unsuccessful, a complainant will also be able to seek a new form of court order, to be called an “End-user Information Disclosure Order”, which will allow a social media company to unmask trolls without consent.

Mr Morrison said the government would seek test cases because it was aware that most litigants in defamation cases against social media giants will be outgunned financially.

He said the government was prepared to intervene in defamation disputes involving social media companies to support victims and make it clear to the courts how it thinks the Commonwealth legislation should be applied.

The laws were first flagged by Mr Morrison at last month’s G20 summit in Rome, where he proposed a new round of coordinated action to protect people online.

Australia and other countries have joined forces at previous G20 summits to impose tougher rules on digital companies, including an agreement in Osaka two years ago when France backed a push to halt the spread of violent terrorism online after the Christchurch attacks.

Attorney-General Michaelia Cash said the measures would also “bring clarity” to the High Court decision in September when it dismissed an appeal by some of Australia’s biggest media outlets including The Sydney Morning Herald and The Australian, finding they are the publishers of third-party comments on their Facebook pages.

The court found that, by running the Facebook pages, the media groups participated in communicating any defamatory material in the case of former Northern Territory detainee Dylan Voller which were posted by third parties. This means that publishers are responsible for comments that appear under their articles on Facebook. The only way to avoid this issue is by turning off comments altogether, a feature which Facebook and Instagram now allow.

“Social media services, they need to step up and they need to understand that they have a responsibility in this regard, and that is why this important step, providing clarity to all Australians, but in particular to social media companies – you will be deemed to be publisher,” she said.

The laws were welcomed by Australia’s two biggest media companies – News Corp Australia, publisher of The Australian, The Herald Sun and The Daily Telegraph, and Nine Entertainment Co, the owner of this masthead.

James Chessell, Nine Entertainment Co’s managing director of publishing also welcomed the move. “For some time now, Nine, along with other media companies, has been campaigning for reform of defamation laws, to bring them into the 21st century,” he said.