The EUSSR is the driving force behind Klaus Schwab’s “Great Reset”.

Curiously, none of these freeloading, overpaid apparatchiks was ever elected by the people. Their legitimacy is more than dubious and their politics a disaster. 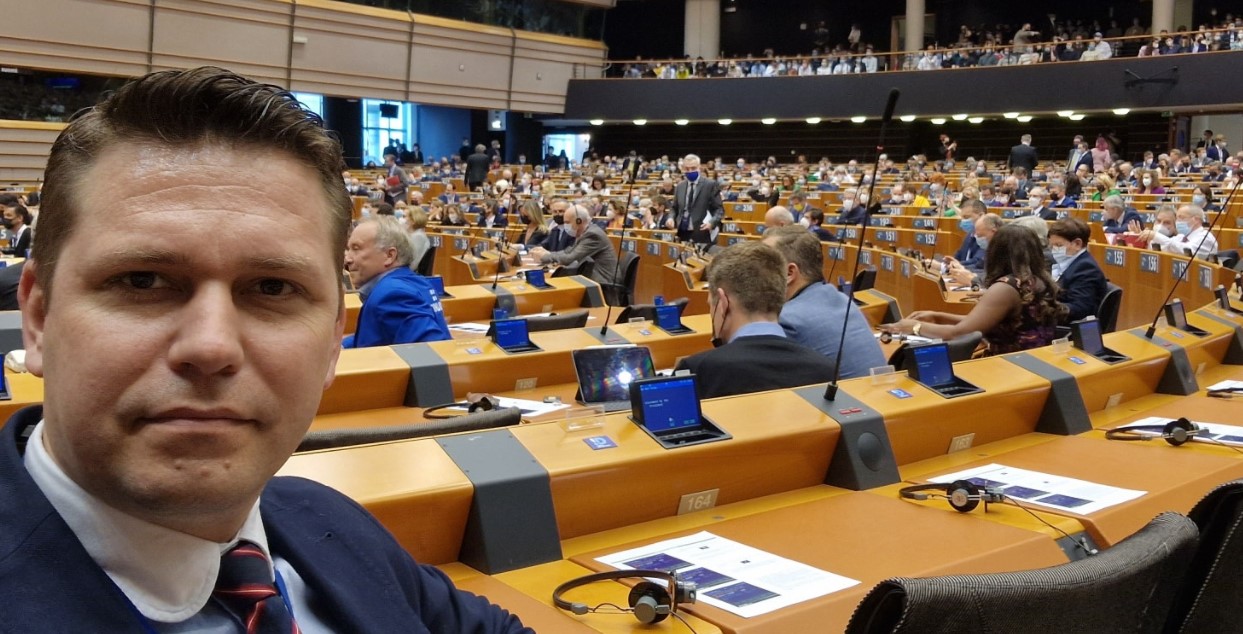 Tom Vandendriessche (Vlaams Belang) in the EP, Brussels. March 23, 2022, exposed the power grab by the EU. Corona measures were simply a smokescreen for doing so. Facebook

The institutions of the European Union have usurped the power of citizens. No one has ever given them the authority or right to do so and they are accountable to no one. That is the position of MEP Tom Vandendriessche (Vlaams Belang) stated recently in the European Parliament.

“The European Commission was originally set up as a college of officials to implement what the member states had agreed upon, but is increasingly acting like a kind of European government that wants to dictate policy to member states. Citizens mainly wonder who these people are who have not been elected by anyone. Technocracy is not democracy,” said Vandendriessche.

“The European Court of Justice was originally established to review the application of the European Treaties. By adopting a broad and activist interpretation of the Treaties, the Court places itself above the constitutions of the Member States in areas where it does not even have jurisdiction. It gives itself the power to assess the internal organization of member states, make policy choices and even rewrite laws against which there is no appeal. Also in connection with this issue, citizens are wondering who those other-worldly judges are who have not been elected by anyone. Juristocracy is not democracy,” he added.

“The Commission and the Court then collude to take away their voting rights and financially blackmail Member States that do not want to bow down to their liberal sharia by withholding billions from the Corona recovery fund. It is now clear that this was never about Corona, but about power and control. This power usurpation is then sold as a defense of the democratic constitutional state. It really can’t get more hypocritical than this,” emphasized Vandendriessche.

The rule of law can only be democratic if it respects the sovereignty of the people, and thus democracy. The organization and political choices of states should not be determined by judges and officials of the European Union, but by nation states themselves. After all, they are democratically legitimized by their populations; the European Union is not,” said Vandendriessche.

“The European Union is completely out of  bounds and turning into something we never signed up for. The British have drawn their conclusions and have been the first to leave. If we continue like this, however, they certainly won’t be the last,” he concluded.

An interesting letter from a reader:

Re: “And it’s not the EU, which is having to deal with a huge influx of refugees – on top of everyone struggling after the ‘Plandemic.’”

From a certain perspective, that is true – but not when viewed through the lens of European-style globalism, of the kind that originally spawned the European Union and before it, the “United Europe” movement of Count Richard von Coudenhove-Kalergi, the acknowledged father of globalism on that continent.

Richard Nikolaus Eijiro, Count of Coudenhove-Kalergi (1894 – 1972) was the child of aristocrats, an Austro-Hungarian father and a Japanese mother. His biracial heritage may have had something to do with his eventual ideological leanings, vis-a-vis eugenics.

Kalergi propounded that the “ideal European” of the future would be of mixed racial heritage, and the product of breeding between darker-skinned peoples of the Third World and native European stock.

For much of his life, Kalergi claimed to be against National Socialism (Nazism) and the things for which it stood, but upon closer examination, his views on race and ethnicity are remarkably similar to those of the German fascists, albeit of a slightly different variety. Old wine in shiny new bottles….

The engineered social and demographic chaos now enfolding Old Europe and its people, is supposed to look spontaneous and more-or-less natural, but this is a polite fiction: This state of affairs is the result of decades of deliberate and careful planning. Planning to put Kalergi’s ideas into action.

This is not mere speculation, either. The globalists are quite open about it in their own way. Every year for some time now, an annual winner of the Charlemagne Prize has been announced. Past recipients include Pope Francis, Angela Merkel, Tony Blair, and Emmanuel Macron, among others prominent in the globalist movement. The other name for this award is the Kalergi Prize. See what I mean?

Those soc-called refugees flooding into Europe are “not a bug,” as the IT people would say, “they’re a feature.” You might respond that Ukrainians are not Third Worlders, but the ingress of large numbers of newcomers, regardless of their ethical/racial heritage, is inherently disruptive to the host society, and it is designed to be, at least in this instance.

4 thoughts on “The Globalist Game to Reset Society”