We are not just passing through. We are not a tolerated foreign body.

We own this country. We are the legitimate owners of the land. 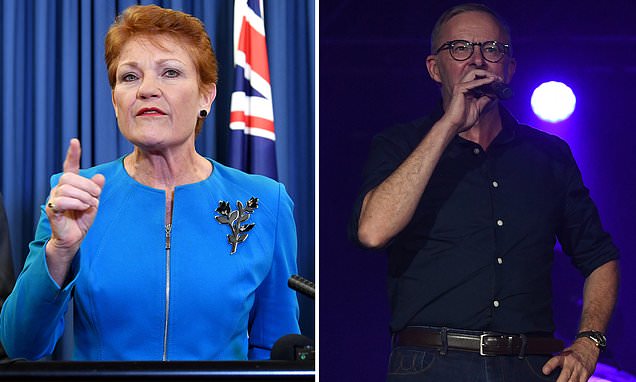 One Nation leader Pauline Hanson has described Welcome to Country ceremonies as ‘left-wing virtue signalling’ and declared she is ‘tired’ of them.

Senator Hanson made the controversial remarks after Anthony Albanese was booed while acknowledging traditional land owners on stage at Bluesfest in Byron Bay on Sunday night.

‘It is common for politicians to be booed at events but some Australians were shocked that Anthony Albanese would get such a hostile reaction while trying to deliver a so-called ”welcome to country”, she wrote on her Facebook page. 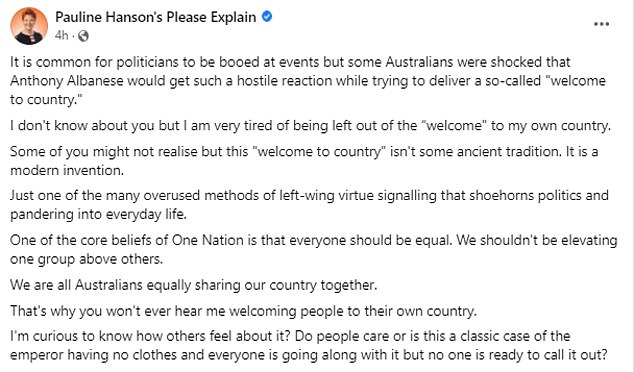 ‘I don’t know about you but I am very tired of being left out of the ”welcome” to my own country.’

Welcomes to Country ceremonies between Indigenous Australian communities date back thousands of years.

TV presenter Ernie Dingo and musician Richard Walley performed the first for non-Indigenous Australians in 1976 at a festival in Perth.

Indigenous elders now regularly give a Welcome to Country at major events including sports games and concerts.

‘Some of you might not realise but this “welcome to country” isn’t some ancient tradition. It is a modern invention,’ Senator Hanson wrote.

‘Just one of the many overused methods of left-wing virtue signalling that shoehorns politics and pandering into everyday life.’