Thanks to Barenaked Islam for bringing this to my attention.

The boyz from the mosque: praying for the demise of the infidel…

Shaanxi is a Muslim province in china. Recently, after a crackdown by the authorities there have been increasing attacks on schools and kindergartens, many children have been hacked to death.

(No one in the media is asking whether the slaughter is connected to Chinese Muslims, despite it occurring in a Muslim area of China. Remember Beslan?)

A man with a kitchen cleaver hacked to death seven kindergarten students and a teacher in northwest China on Wednesday, before returning home and committing suicide, state media said.

Officials do not yet know what prompted the 48-year-old man to attack students at a private school in Shaanxi province.Â (Oh let me guess) It was at least the fourth such attack on school children in the last month.

Perhaps he was ” the child who couldn’t meet his parents’ expectations,” perhaps he was behind with his mortgage payments: “Foreclosures generate an enormous amount of misery and anxiety and depression that can tip people into all sorts of dangerous behaviors…” I guess we nee to ask Â amateur psychologists Â like Geraldo and Ezra Klein Â to figure it out for us. Its just toooo hard…..

The Wednesday morningÂ incident left five boys, two girls and a female teacher dead, said the Xinhua news agency.Â In addition, 11 children and an adult were wounded in the attack. Among them were two children who were hospitalized in serious condition, Xinhua said.

China has seen a spate of attacks at schools in recent weeks.

On April 30, a man armed with a hammerÂ injured five preschool children in east China before setting himself on fire in a classroom suicide, a government spokesman told Xinhua news agency.Â The attacker held two children in his arms as he poured gasoline over himself, the spokesman said. Teachers in Weifang City, Shandong province, pulled the children away as the man died, the spokesman said.

On April 29, at least 28 children were injured when a man with a knife attacked a kindergarten in east China, state media said. Most of the victims were four-year-olds. Police arrested a 47-year-old suspect. The incident happened in Taixing city in Jiangsu province.

And on April 28 a man attacked 18 students and a teacher with a knife at a primary school in southern China’s Guangdong province, Xinhua said.

The attacks come despite the April execution of Zheng Minsheng, 42, a former community doctor who stabbed eight children to death and wounded five others at an elementary school in eastern China on March 23.

Zheng, executed by a firing squad in Nanping City late last month, told investigators he carried out the attack because he was frustrated by “failures in his romantic life and in society,” according to Xinhua.

See a timeline of school attacks in China CNN

We love diversity, but not ifÂ  it’s a smokescreen for Islamic Â Jihad.
Where better to display diversity than the Melbourne International Film Festival, where an array of films caters for all tastes.

THE unofficial leader of the Uighurs, Rebiya Kadeer,Â  used her visit to Australia to urge the Federal Government to take a stand over China’s violent repression in her homeland…and to try to persuade Australia to take the remaining Uighur detainees from Guantanamo Bay.
Kadeer was here for the launch at the Melbourne International Film Festival of a documentary about her life and her people’s struggle.
The Uighurs say the Chinese Government is committing “cultural genocide” by banning the teaching of Uighur in schools, discriminating against Uighurs in jobs, closing mosques and demolishing ancient Uighur cities such as Kashgar, on the Silk Road.
Mrs Kadeer put the death toll in the July 5 demonstrations in Xinjian at more than 1000…the Chinese security forces fired on 10,000 Uighur demonstrators. Five thousand were arrested in the following days, she said.
As for the 13 Uighurs in Guantanamo Bay, who were declassified as enemy combatants in 2005, and whom the US has asked Australia to take, Kadeer says “Australia has nothing to fear.” Read it all>>

If this is the case, why did all the victims (ethnic Han Chinese) Â have their throats slashed?

Read it all from FOX NEWS

How to deal with Mohammedanism:

Where are the fatwas? The angry marches in front of embassies, the indignant speeches? Where are al-Qaeda’s videos? In short, what does China have that Denmark did not? China has been actively discriminating against Muslims, and recently a number of them have been killed in violent street riots.

END_OF_DOCUMENT_TOKEN_TO_BE_REPLACED

“Perhaps they were jealous of his success. They clearly targeted the family…”

AsÂ The TimesÂ stood outside what is left of No 447 Zhongwan Street, a Han neighbour approached. She had watched the killings from her home in an apartment block overlooking the store.

“We saw hundreds of Uighurs running down the street on the afternoon of July 5. About ten suddenly rushed into the store. They began to hit the people inside, even the old mother, with bricks and stones. They tried to run outside. Then they were dragged back inside.

“There were terrible screams. Just wordless screams. But then very quickly they fell silent.”

She said that the son tried to hide in a chicken coop but was dragged out and his head was cut off. All the victims were left to burn inside the building. The corpses of the boy and his father were found beheaded. Mr Yu said: “Even the 84-year-old mother was stoned and then burnt. It was terrible, terrible. So cruel.”

“Xinjiang’s eight million Uighurs have complained of political, cultural and religious persecution by Beijing and there have been repeated calls by Uighurs for independence.”

140 slain as Muslims riot in China

“Hundreds of rioters have been arrested, the official Xinhua news agency reported, after rock-throwing Uighur people took to the streets of the regional capital on Sunday, some burning and smashing vehicles and confronting ranks of anti-riot police.”

Â The BBC are saying that muslims “were involved” which is BBC code for “they started the trouble and now are playing the victim card”. They always play it down when it involves one of their pet projects.

“Rioters on Sunday overturned barricades, attacking vehicles and houses, and clashed violently with police, according to media and witness accounts. State television aired footage showing protesters attacking and kicking people on the ground. Other people, who appeared to be Han Chinese, sat dazed with blood pouring down their faces. The demonstrators had been demanding justice for two Uighurs killed last month during a fight with Han Chinese co-workers at a factory in southern China.”

So in what sense are the “China Muslims” the “target” here? It looks as if they are fairly efficiently targeting the Han Chinese.

But in the mainstream media, of course, Muslims areÂ alwaysÂ the victims, no matter what.

Violent street battles killed at least 140 people and injured 828 others in the deadliest ethnic unrest to hit China’s western Xinjiang region in decades, and the Chinese government blamed Uighur exiles for stoking the unrest.

Hard to Believe the Lovable Uighurs Could Be Involved in Terrorism . . . Â
NROÂ — Andy McCarthyÂ
. . . even though the ones we were holding at Gitmo were trained in al-Qaeda-affiliated camps.Â

TheÂ Wall Street JournalÂ (as flagged in theÂ NROÂ web briefing)Â reportsÂ on rioting in China by Uighur “students” that has left scores dead and hundreds wounded. The “students,” described elsewhere in the story as from a “predominantly Muslim ethnic group[, which has] long chafed at restrictions on their civil liberties and religious practices imposed by a Chinese governmentÂ fearful of political dissent,” expressed their dissent by torching cars and buses, as well as â€” according to accounts of some witnesses to state-controlled media â€” rampagingÂ “with big knives stabbing people” on the street.

Thanks to Counter Terror

END_OF_DOCUMENT_TOKEN_TO_BE_REPLACED

Ex-Gitmo headbanger leads Taliban campaign against US troops in Afghanistan

The late afternoon protest in the city of Urumqi was a rare mass demonstration in Xinjiang province, a region that has seen occasional separatist violence against Chinese rule.

More than 300 people, mostly members of the largely Muslim Uighur ethnic group, had gathered to demand an investigation into a brawl June 25 between Uighur and Han Chinese workers at a toy factory in southern China, said Gulinisa Maimaiti, a 32-year-old employee of a foreign company who took part in the protest.

END_OF_DOCUMENT_TOKEN_TO_BE_REPLACED

Muslim Uyghur employees at government departments in China’s northwest are being offered free lunches during the holy fasting month of Ramadan.

* A very interesting account on how China keeps her ‘restive’ Muslims in check. Must read!

END_OF_DOCUMENT_TOKEN_TO_BE_REPLACED 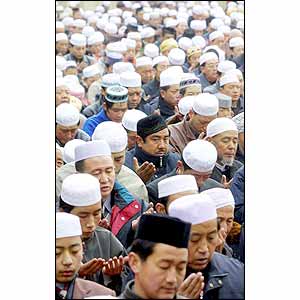 Beijing – Officials have tightened controls over mosques and religious practice in China’s restive Xinjiang region for the ongoing Ramadan festival, according to exiled Uighurs and local government notices seen on Thursday. Xinjiang officials ordered Muslim restaurants to stay open during the traditional Ramadan fasting and imposed restrictions on mosques and government work units, Dilxat Raxit of the Munich-based World Uighur Congress said in a statement.

A notice on the official website of Xinjiang’s Aksu city listed nine measures to be taken for Ramadan by the Yingmaili township government in Shaya (Xayar) county, starting by publicizing the religious policies of the ruling Communist Party.

The notice bans mosques in Yingmaili from hosting people from outside the area or playing music, videos, trumpets or drums; and prohibits them from coercing people into fasting or taking part in other religious activities.

END_OF_DOCUMENT_TOKEN_TO_BE_REPLACED

Interestingly the Associated Press runs to frame the Terrorists to a local ethnic conflict in one of China’s Western provinces. AP wrote: “Chinese forces have for years been battling a low-intensity separatist movement among Xinjiang’s Uighurs, a Turkic Muslim people who are culturally and ethnically distinct from China’s Han majority.” The news agency has tried to set the agenda of the debate by scoring three points for the “radicals.” They are separatists, they are representative of a local ethnicity and they are Muslim. In addition the description of the struggle is informative: Chinese forces versus a Uighur movement. In a way a parallel to Kosovo, Chechnya and Kashmir with two projected effects. As framed by AP, the struggle of these “Terrorists” is indeed legitimate even though the means are violent. But is it the case?