“Sovereign Immunity or Cover-Up?: Obama wants to protect our Saudi “friends” â€” even when they fund our jihadi enemies,” by David Yerushalmi inÂ National Review, June 24 via JW:

Full disclosure: I have a pony in this race. I am an American and, as an attorney, I am an officer of the court. I make this disclosure in the light of an amicus curiae brief recently filed with the U.S. Supreme Court by the Obama-Holder Department of Justice. The brief pertains to the mammoth case that came to the Supreme Court via the Second Circuit Court of Appeals (New York) called In re Terrorist Attacks on Sept. 11, 2001. The Supreme Court is currently pondering whether the case merits its review.

In its friend-of-the-court brief,Â the Justice Department has argued, almost unimaginably, that the Supreme Court should not review the Second Circuit’s ruling that the victims of 9/11 and their families may not sue the Saudi governmentÂ or, more importantly, the individual Saudi princes who personally (not as government actors) gave money to Muslim charities they knew would be funding al-Qaeda’s jihad against America. […]

The question now crying out to be asked:Â How far will the Obama administration go to prevent private plaintiffs from exposing the quite personal ties between our Saudi “friends” â€” who love to host U.S. presidents bearing words of praise â€” and our jihadi enemies fighting to impose the rule of sharia around the world?

US President Barack Obama will visit Saudi Arabia on June 3 for talks on Iran’s nuclear program and Washington’s renewed push for a Middle East peace plan, the White House said on Tuesday.

But surely this has nothing to do with Islam?

Akhmed Tagayev was deputy mufti of the Clerical Directorate of Muslims of Dagestan and was considered a leading opponent of “religious extremism” among Muslims, the agency said. More from Reuters

According to the official Petra news agency, Nasser Judeh issued a strong protest to the ambassador “over a debate in the Knesset on a motion on a so-called two states for the two people on the two banks of the Jordan River.”

Judeh said Jordan was “dismayed by the debate and categorically and totally rejected the proposal submitted by a Knesset member, calling on the Israeli government for a clear explanation of what took place in the Knesset.”Â

Â TheÂ Islamic RepublicÂ of PakistanÂ is founded on Islam and nothing but Islam. Pakistan is, and always was, an economic basket case and highlyÂ dependentÂ on tribute in the form of ‘aid’ from Western nations, all of it wasted in a swamp of corruption. Â No matter how many billions the Obama administration throws at this nuclear third world nation, nothing will Â  prevent it from falling deeper and deeper into the abyss.Â

Humanitarian crisis in Swat: Once again, where are the Saudis?

Even after the criticism Saudi Arabia and other wealthy Arab states faced for their stinginess in the aftermath of the tsunami of 2004, the Saudis again show their willingness to throw untold amounts of money at jihadist causes while looking the other way from civilians caught in jihadist crossfire in Pakistan.

“Where Is Saudi Support For Taliban Victims?” by Rachel Ehrenfeld forÂ Forbes,

Pakistan: “The threat of the Taliban is a hanging sword above the necks of Christians”

Aside from the Taliban, “the legal system informally discriminates against non-Muslims, and in recent years Christian villages have been ransacked by Muslim mobs incited by dubious reports that a Quran had been desecrated.” No problem; surely theÂ 2 billion dollarsÂ the U.S. is giving Pakistan will ameliorate this situation (or not). “Pakistan:Christians pressed as military battles Taliban,” fromÂ Compass Direct News,Â via JW

JEDDAH: A large number of Saudis are engaging in temporary marriages with Indonesian women with the intention of divorcing them.Â

“Such marriages are likely to increase if Islamic scholars fail to give a clear ruling prohibiting them,” said Khaled Al-Arrak, director of Saudi affairs at the Saudi Embassy in Jakarta.

He said most Saudis were engaged in such marriages without realizing their consequences. “Some poor Indonesians marry off their girls to Saudis hoping it would put an end to their poverty and miseries. If the Council of Senior Islamic Scholars does not ban this type of marriages, things will go out of control,” Al-Arrak warned.

END_OF_DOCUMENT_TOKEN_TO_BE_REPLACED

AP plumps openly for the mujahedin, and drops all pretense of the idea that jihad is a spiritual struggle: “There is a degree of public sympathy for Saudis who carry out jihad in occupied Muslim countries.” But still there is no indignation, in Saudi Arabia or elsewhere in the Islamic world, over the proposition that jihad warfare againstÂ unbelievers, and their subjugation, is justified. These men have been indicted for waging jihad against the wrong people, not because the idea of waging jihad in a violent manner is itself wrong, or because jihad against unbelievers is wrong.

END_OF_DOCUMENT_TOKEN_TO_BE_REPLACED

* Saudi charity: ‘Polygamy is the cure for single women’

Musulmaniac beats wife until she is brain-dead

A Muslim cleric in Saudi Arabia has called on women to wear a full veil, or niqab, that reveals only one eye. 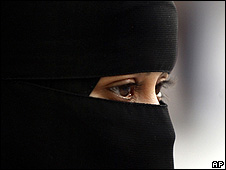 The two-eyed look remains too seductive for Sheikh Habadan

END_OF_DOCUMENT_TOKEN_TO_BE_REPLACED

“Corrupting” and “satanic” infidel must be slain

Except when he’sÂ working for Hamas, advocating jihad and Jewish genocide. Another “you-can’t-make this stuff-up” moment courtesy of Dar al-Islam.

* Meanwhile, take a look at how serious the Saudi’s are about their Ramadan fast:

* As with everything these pathetic hypocrites say and do, nothing is quite what it seems. They merely starve themselves during the day so they can gorge themselves at night.

Silly? Idiotic? you tell me….

* Take a good look at the Saudis…