END_OF_DOCUMENT_TOKEN_TO_BE_REPLACED

BAGHDAD: A US soldier is suspected of opening fire on his comrades at the largest American base in Iraq on Monday, killing five soldiers in whatÂ was the single deadliest toll on US forces in a month.

US soldier shoots and kills five fellow troops at Baghdad base

An American soldier killed five of his fellow troops at a base in Baghdad, the Pentagon said today.

The five were killed in a shooting 2pm local time, at Camp Liberty near Baghdad international airport.

END_OF_DOCUMENT_TOKEN_TO_BE_REPLACED

Gun enthusiasts are stocking up

By Mari A. Schaefer/Inquirer Staff Writer

Fueled by rumors that the Obama administration will ban assault weapons and heavily tax ammunition, gun enthusiasts are stocking up.

Handguns, semiautomatic weapons, and all types of ammunition are flying off store shelves, despite the recession.

END_OF_DOCUMENT_TOKEN_TO_BE_REPLACED

* After the horse has bolted, Â you dismount…

BEIRUT (AP) â€” Ahead of an election that could oust the U.S.-backed Beirut government, America’s top diplomat said Sunday that Washington supports “voices of moderation” and never will make a deal Syria that “sells out” Lebanon’s interests.

The June 7 vote could boost the Iranian-backed Hezbollah and its allies, possibly paving the way for renewed Syrian influence over Lebanon.

Looks pretty derailed to me…

END_OF_DOCUMENT_TOKEN_TO_BE_REPLACED

and another one today:

Back-to-back suicide bombings have killed 60 people outside the most important Shiite shrine in Baghdad, a day after the country was rocked by its most deadly violence in more than a year.

The bombings are the latest in a series of high-profile attacks blamed on Sunni insurgents, police officials said.

The latest bombers detonated explosive belts within minutes of each other near separate gates of the tomb of prominent Shiite saint Imam Mousa al-Kazim, located in the northern neighbourhood of Kazimiyah, said a police official.

Netanyahu to Obama: You take care of Iran, and then we’ll talk

Today in History: 18 Years ago Today the NY Times Called for the US to Overthrow Saddam Hussein….

END_OF_DOCUMENT_TOKEN_TO_BE_REPLACED

Salman Rushdie still lives in hiding, Ayaan Ali Hirsi had to flee the Netherlands and lives in an undisclosed location in the US, Â and the Danish cartoons still strike terror in the hearts of the infidels.

All around the world politicians live in fear and dare not say a word against the assassins of Islam, who are ready to burn down embassies, murder Westerners at random in a “fanaticalÂ frenzy which is more dangerous than hydrophobia in a dog” (Winston Churchill) if their prophet is insulted, and we all know it doesn’t take much to offend the prophet of Islam.

But things seem to be changing, slowly, slowly:

Ezra Levant & Mark Steyn have led the way: the ridiculous “Human Rites” commissions are on the way out, at least in Canada. Â In Australia, we had the case of the two pastors in Victoria who needed to raise nearly a million dollars to defend themselves against a frivolous ‘hate-speech’ lawsuit for reading from the Koran (sic) and KRudd’s minister of the inquisition, comrade Conroy, is determined to censor the internet. Things don’t look good.

Like counterfeit money devaluing real money, Â counterfeit human rights, like the “yuman rite” not to be offended, devalue the term thatÂ once was reserved for real rights like freedom of religion, the equality of men and women before the law, and the right to be free from violence.

Clergy in the crosshairs

END_OF_DOCUMENT_TOKEN_TO_BE_REPLACED

This, of course, is only to be expected and part of the pattern. After all, if theÂ U.S. War CollegeÂ hires professors who apologize for the terrorist organization Hamas and intentionally shelter students from Islamist doctrines of violence, what can one expect from DoD advisers?

No matter what games infidels engage in to try and challenge Muslims to make something better of their global community and religion, it is not for us to decide their progress.

As we try to understand where the Obama administration will fall with regards to the global threat of politicalÂ Islam, the first few months have provided a number of hints, not least of which was the tenor of the recent visit to Turkey. It was painfully obvious after witnessing the length to which theÂ Obama team went to avoidÂ any substantive discussion on political Islam and the threat it poses toÂ humanÂ rightsabroad and domestically. Domestically, in the weeks preceding his trip, Islamists inside the Beltway began to more openly play their cards to what they obviously perceive to be a friendly administration. Groups like the Congressional Muslim Staffers Association (CMSA) are trying to establish themselves in a position of influence inside the White House, the House, and the Senate.

* Bomb goes off in Cairo cafe’, 4 dead including 2 tourists

GEERT WILDERS AND THE ‘KORAN BAN’

Wilders position on “banning the Koran” has been wildly misrepresented and misused. Enemies of free men wield that fallacious argument to discredit Wilders. They pounce on it like white on rice – flailing about wildly, decreeing the violaton of Â  freedom of speech. The irony, of course, is that they don’t give a rat’s ass about Wilders freedom to speak. They aid and abet the Islamic supremacists who are desperate to shut him up and shut him down. 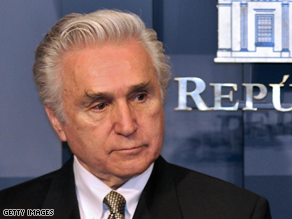 An Opening to Iran?Â They’ve sold us this rug before.Â

by Michael Rubin / The Weekly Standard

During the Democratic primaries, Barack Obama promised to meet the leaders of Iran “without preconditions.” He appears a man of his word. Within days of his election, the State Department began drafting a letter to Iranian president Mahmoud Ahmadinejad intended to pave the way for face-to-face talks. Then, less than a week after taking office, Obama told al-Arabiya’s satellite network, “If countries like Iran are willing to unclench their fist, they will find an extended hand from us.” The president dispatched former Defense Secretary William Perry to engage a high-level Iranian delegation led by a senior Ahmadinejad adviser.

The pundits and journalists may applaud, but their adulation for Obama’s new approach is based more on myth than reality. “Not since before the 1979 Iranian revolution are U.S. officials believed to have conducted wide-ranging direct diplomacy with Iranian officials,” the Associated Press reported. But Washington and Tehran have never stopped talking; indeed, many of Obama’s supposedly bold initiatives have been tried before, often with disastrous results.