PVV party leader Geert Wilders is pleased with the final outcome of the European elections in the Netherlands. The final results are different than the exitpoll. His Party for Freedom got 4 seats in the European Parliament and is together with D66 the second party in The Netherlands in terms of numbers of seats. Ignore the Rubbish from the Media!

Farage on a roll:

Everyone should fear and loathe the freedom sack, it’s a symbol of hate, not love.

…people have asked us:

We wondered, “Why is the place we grew up in so discriminatory against foreigners and especially against Muslim women wearing hijab?” More and more native Finnish people convert to Islam and wear the hijab….

Finland seems to be a fever swamp of low info voters:

Most of Finland’s MEPs for 2014-2019 are positive about the European Union and would not change any key policies. For example, more than three quarters said that Finnish membership in the EU is a good thing.

The Political Side of Hijabs

Most people see the hijab as religious or cultural, but the hijab is a symbol of the Sharia and has a very political meaning.– by Bill Warner

Wannabe caliph Erdogan respects nothing and no one. Yet he commands our respect?

Turkish BS on the double:

In the European parliamentary elections, victory went to the extreme rightists… The racists won the elections.—Well, this is the coast-to-coast will of Europe

Australian billboards claim Jesus for Islam, but could you run a billboard proclaiming “Jesus Christ is Lord” in Saudi Arabia?

No, of course not. Nor could one post anything about Judaism, Buddhism, Hinduism, atheism, or agnosticism. Why? Because Saudi Arabia is not a free society. Why? Because they enforce Sharia. And Sharia forbids the propagation of non-Islamic faiths or the display of their symbols.

Muslims here are taking advantage of rights to freedom of speech, religion, and conscience thatÂ they will destroy where they are able to impose Sharia. Put that on a billboard. “He’s not the son of God, just the support act,” by Aaron Cook for theÂ Sydney Morning Herald, May 28 (thanks to JW):

Christians in Sydney will have their core beliefs challenged by provocative advertisements due to appear on billboards and buses in the next month.

The ads, paid for by an Islamic group called MyPeace, will carry slogans such as ”Jesus: a prophet of Islam”, ”Holy Quran: the final testament” and ”Muhammad: mercy to mankind”.

In a free society we should be allowed to run ads that read “Muhammad was a mass-murdering serial rapist, a bandit and a slave trader.”

END_OF_DOCUMENT_TOKEN_TO_BE_REPLACED

The Age: Italian women get cash and Korans

The illustrious Gaddafi is day late and a dollar short: Italy just refused to recognize Islam as an official religion (JW)

Libyan leader (terrorist) Â Muammar Gaddafi gave a lesson on Islam and copies of the Koran to a few hundred young Italian women on he arrival in Rome for his fourth visit in a year.

It was the second time the Libyan leader – who travels with female bodyguards and fancies himself a self-styled feminist – had staged such an event for Italian women, who were recruited by a modelling agency and paid an undisclosed sum to attend.

Michela, who asked that her last name not be used, told Associated Press Television News that three of the participants converted to Islam on the spot on Sunday.

Related links from the RoP:

END_OF_DOCUMENT_TOKEN_TO_BE_REPLACED

Who do you believe? Me or your lying eyes?

Trust me, I’m a Muslim criminal with 20 years behind bars, I wouldn’t lie to you:

A Muslim who served 20 years behind bars has slammed a report that claims prisons are factories for hundreds of home-grown terrorists. Former prisoner Danny Afzal, who works as a researcher for the Prison Reform Trust, hit out at the Royal United Services Institute journal after itÂ published a report warning that prisons are radicalising Muslims.

“The report is based on unreliable secondary evidence. I’ve visited prisons first hand and spoken to enough Muslims there to know that the report’s ‘facts’ are unfounded.” Â (From the Bunglawussi blog, always good for a giggle…) They also complain that “it is theÂ Telegraph version of the story that is reproduced by Robert Spencer atÂ Jihad Watch.” (Don’t panic, we’re just Islamic)

That’s right folks, for 20 years Danny was the prison bitch, he knows all about Â prison da’awa and radicalization behind bars, why would he lie? Â Go back to sleep, Â nothing to see here……

Got no money, got no home, spinning wheel, all alone….

But not when you’re Muslim and you wanna build a $ 100 million mosque in NYC. Then you can get public funding

(Reuters) – The Muslim center planned near the site of the World Trade Center attack could qualify for tax-free financing, a spokesman for City Comptroller John Liu said on Friday, and Liu is willing to consider approving the public subsidy.

What a surprise: the group dedicated in its own words to “eliminating and destroying Western civilization from within” has connections to the “moderate” Ground Zero mosque. “Mosque’s Saudi Patron,” fromÂ Investor’s Business Daily, August 26/JW

One would think that if Islam really were a Religion Of Peace That Has Been Hijacked By A Tiny Minority Of Extremistsâ„¢, this would be a relatively easy process. All one would have to do would be show the prisoners the peaceful aspects of the Qur’an that they had overlooked, and explain to them how Osama bin Laden and the rest had misunderstood Islamic theology. Then their loyalty as Muslims would do the rest.

Why isn’t this happening?

Because, of course, the prevailing dogma that Islam is a Religion Of Peace simply isn’t true. The Qur’an and Sunnah teach warfare against unbelievers. The Muslim chaplains in the prison system in the UK, and the prisoners, know that. So what can the chaplains do?

And this is not helping, either:

MUSLIM prisoners bitch about being ‘tortured’ by SimonÂ Cowell

UK ISLAMIC terrorists at a maximum security jail in Britain have handed in their cell TVs because they do not want to watch the ‘distracting’ X Factor. Barenaked has more>>

Government efforts to de-radicalise jailed Islamic extremists are failing, former inmates have told the BBC….The Ministry of Justice said it was working “with a number of third-sector partner organisations” to rehabilitate prisoners.

Around 200 extremists have been jailed since the 2005 London bombings and some are now due for release from prison and are returning to their communities….

Shah Jalal Hussain, who also lives in London and spent 18 months in prison after being convicted of raising funds to support terrorism, claimed thatÂ prison imams were viewed with open hostility and as “puppets of the regime”.

“A number of times he [the imam] was even attacked physically. He tried to press charges, but dropped them in the end.Â Prison didn’t change my views at all, in fact it made me stronger in my beliefs,” he said.

The government said Muslim extremists presented a complex profile and there were “no off-the-shelf interventions” which could be used to deal with them.

Instead, “offenders are managed based on individual risk assessments and sentence plans”.

Harry Fletcher of the National Association of Probation Officers (NAPO) said once prisoners were back in the community, traditional risk assessment tools and strategies were proving ineffective….

“I believe that Australians, Muslim and non-Muslim alike, can live together in harmony,” Sheik Safi said.

“Islam does not recognize any other religion or system as legitimate. Wherever it comes to power, it abolishes all human rights. …”

By Edith Bevin /The Daily Telegraph

Ready for some halal kitman & taqiyya sausage sizzle with sauce?

Sheik Yahya Safi of Lakemba Mosque welcomes Sydney to his Mosque – Lakemba Mosque is having an open day, inviting all to come visit and learn about Islam.

Translation: prayer leader in the mosque, proselytizer in chief and Â judge of Islamic affairs…..

ISLAM comes from the Arabic word Salaam meaning peace but for Sydney’s Lebanese Muslims the past few years have been anything but peaceful. (No Islam doesn’t mean “peace”. Islam means ‘submission’ under the ‘laws of allah/ed)

Tensions between Sydney’s Muslim population and the wider community grew with the arrest of our first home-grown Islamic terrorists, outcry over applications for Islamic schools in formerly Anglo Saxon enclaves of outer western Sydney, debate over asylum seekers from war-torn Afghanistan and a series of gang rapes blamed on committed by men of Middle Eastern descent.

“When people have a bad idea about you, you need to give them the right idea,” Sheikh Safi said.

END_OF_DOCUMENT_TOKEN_TO_BE_REPLACED 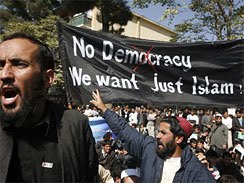 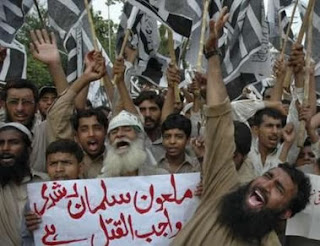 END_OF_DOCUMENT_TOKEN_TO_BE_REPLACED

Abominable Islamic propaganda for UK textbooks: petro-dollars hard at work.Â The only thing the Arabs ever invented is Islam and the burka…

An educational foundation in the UK has announced plans to distribute to high schools a free book that highlights the scientific and cultural legacies of Muslim civilization.

1001 Inventions: Muslim Heritage in Our World is the creation of the Foundation for Science Technology and Civilization (FSTC), a Manchester-based organization set up to raise awareness of the contributions of the Muslim world to modern civilization.

FSTC said the contribution that Muslim and other civilizations have made to the modern world has been widely overlooked and that its team of academics has focused on debunking the myth of the so-called “Dark Ages of Civilization.”