But before he dies, he wants aid. Or money. Democracy. Or something:

Sheikh Zuway says the international community needs to do more.

“People here, they did not hear anything about Australia … they are a good people, yet why they did not do anything? Why didn’t they send us some aid, some[one] very high up [in] responsibility? he said.

Sheikh Naser Zuway travelled to Benghazi last week to protect his wife and children who were holidaying in Libya. Â (source) thanks to Islam Monitor

Libya is on the brink of civil war as the battle for control of the country intensifies. (ABC)

Drew Warne-Smith/Australian (thanks to Mullah)

A PROMINENT Islamic community group that planned to present a peace prize to the son of Libyan dictator Muammar Gaddafi has withdrawn his nomination after his support for the violent suppression of demonstrations in his homeland.

(Prominent? Â What makes a group of Â bludgers prominent?)

Keysar Trad, from the Islamic Friendship Association of Australia, confirmed his organisation had intended to award Saif al-Islam Gaddafi its Champion of Cultural Inclusion prize for 2011.

He had been nominated by members of the Libyan community in Australia for his work freeing political prisoners detained for opposing his father’s regime and securing the release of Bulgarian nurses wrongly accused of infecting children with HIV.

Hmm, what a racket that was. His father created a problem that only his favorite son could solve? How slick!

END_OF_DOCUMENT_TOKEN_TO_BE_REPLACED

Seven British aid workers held captive on a ship in the Libyan sea have been told they may be treated as “terrorists” when they reach land, sources on board said today. (The Independent)

If you can’t broker peace on your own peace flotilla, I’m not sure you have much to teach the Israelis:

Greek commandos boarded a Gaza-bound aid shipâ€”whose mission went awry and turned into a hostage situation after a dispute with the ship’s captainâ€”in a harbor off the country’s coast Friday, an official with the activist organization sponsoring the vessel said.

After the captain’s argument with an Egyptian broker, the ship left behind the aid group’s cargo and a large group of volunteers. (Andrew Bolt)

“It is hard to imagine that President Obama would be praising the tolerance of a Christian nation if it had witnessed the burning of 700 mosques since 1998.” (ROP)

END_OF_DOCUMENT_TOKEN_TO_BE_REPLACED

Invading Europe by encouraging Muslim migration has long been a favorite strategy /policy Â of Libyan despot Col Muammar Gaddafi. The fact that Italy’s Berlusconi offered him 5 billion Euro’s to stop it seems to encourage this old jihadist Â even more so.

* Are the EUro-dhimmies gonna grow some balls and do what it takes to stop it? There are few signs. But at least they’re talking about it:

Illegal immigration dominated a debate among a number of European Parliament candidates at the University this week, with some candidates taking harsh stands on the issue.

Nationalist candidate Frank Portelli said Libyan leader Muammar Gaddafi had clearly stated that, since European countries had exploited Africa in the past, Africans had a right to invade Europe and take back what was theirs.

END_OF_DOCUMENT_TOKEN_TO_BE_REPLACED

* And you thought Berlusconi was ‘right wing’ and hard core? NOT!

Â Fact is, Â we are not talking about “immigrants” here. These are Â not ‘refugees or asylum seekers’Â either, they are Â Muhammedan invaders, aided, Â abetted, encouraged and enabled by the likes of the omnipotent, magnificent ridiculousness of Â Col Muammar Ghaddafi and EU Commissioner Ferrero Waldner. The agenda is clear: Â once the jiziyah flows, it just keeps coming… Â

May Allah curse Ronald Reagan for missing the target and blowing the chance to make the world a better place:

Â at the close of talks with representatives of the Libyan government, held in Tripoli to define a framework agreement between the EU and Libya. “I am sure that by the end of the year at the latest we shall reach the signing of an accord,” the Commissioner for External Relations and Neighbouring European Policy told a press conference. Today’s has been the second round in the negotiations following those held in Brussels in November. Austrian-born Ferrero Waldner expressed her satisfaction with the talks, stressing how this “is an historic moment in relations between the European Union and Libya: it was Libya herself who wanted to reintegrate with the international community and we acknowledge this”. In relations between Tripoli and Brussels “we can make big strides” Ferrero Waldner said, turning to LibyÃ s Foreign Minister, Abdulrahaman Shalgam. Apart from the issue of immigration, other themes touched on were political dialogue, trade relations, transport (especially by air), the environment and energy with the aim – reports an Italian source in the delegation – of “developing a dialogue on energy policies to include everything: gas, oil, solar energy”. Ferrero Waldner’s delegation also met the General Secretary for European Affairs of the Libyan government, Al Obeidi, and the head of these negotiations with the European Union, Mohammed Siala 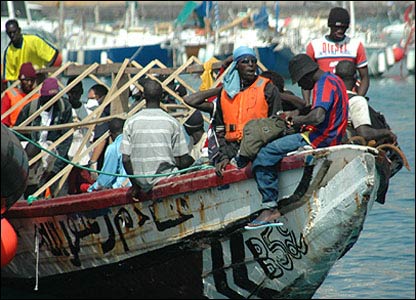 END_OF_DOCUMENT_TOKEN_TO_BE_REPLACED

Gaddafi welcomes ‘darling Leezza’ as US breaks bread with Libya

Another photo-op for the affirmative action lady

Sample: Â The month of Ramadan is devoted to worship, contemplation, charity, and fellowship, observed with a daily fast.Â  At the end of each day, Muslims traditionally break the fast with a meal known as Iftaar.Â  This Iftaar is a chance to celebrate Ramadan, which commemorates the revelation of the Koran to the Prophet Mohammed, and to engage in reflection, generosity, and compassion â€“ important aspects of Islam.Â  This year the theme is, “Celebrating Islamic Art and Culture.”

“American officials had hoped that by the time Dr Rice arrived, Libya would have deposited millions of dollars in compensation in a bank account set up for the purpose, but it was said to remain empty today.”

It was a scene almost unimaginable just a few short years ago. America’s top envoy welcomed by the one-time “Mad Dog of the Middle East”, Colonel Muammar Gaddafi, breaking his Ramadan fast at a lavish dinner beneath Beduin canvas and the desert stars.

Why should Gaddafi not be pleased with her? After all, Condi is giving him compo for being a terrorist for all his life!

END_OF_DOCUMENT_TOKEN_TO_BE_REPLACED

Video link here
*
* Watch this scum of the desert vilify the victims of the Lockerby bombing:

Scottish police had information that might have changed the outcome of the Lockerbie bombing trial, a BBC TV programme has learned.