Genocide on White South Africans is Cool with Enlightened Progressives:

It came to prominence in the 1980s, as unrest grew over South Africa’s apartheid racial segregation, and gained particular support in the farming town of Ventersdorp, 150km west of Johannesburg, where Terreblanche lived.

The movement’s military uniforms and swastika-style logo led them to be seen an extremist organisation, and the AWB was behind a bombing campaign around the 1994 South African elections…the same year that apartheid ended.

In 1995, people voted for unified local authorities for the first time, and the AWB’s membership and influence declined.

But the white supremacist remained in the news… he was jailed for six months in 2000 for assaulting a petrol attendant and was also in prison between 2001 and 2004 for the attempted murder of a farm worker, who was left brain damaged.

Terreblanche was hacked to death with a machete at his home in Ventersdorp on 3rd April 2010, at the age of 69, reportedly in a dispute over wages. Two black farm workers are currently awaiting trial charged with his murder.

Terreblanche means ‘white earth’ in French, which is the language of Terreblanche’s ancestors.

END_OF_DOCUMENT_TOKEN_TO_BE_REPLACED

A former BBC employee has blown the whistle on cocaine use among the corporation’s TV and radio producers and star performers.

* Not that I I ever spotted a “star performer” among those tarts….

Cocaine use ‘rife in the media’- Broadcast

Funniest links of the day:

Who are the fascists now?

HUNDREDS of “anti-fascist” protesters have stormed the BBC’s television headquarters in west London amid outrage at a far right-wing politician’s appearance on a political chat show.

A group of 25 people broke through a front gate and entered the BBC’s Television Centre shortly before British National Party leader Nick Griffin’s arrival at the studios.

While they were swiftly ejected, more protesters carrying placards emblazoned with the messages, Stop Fascist BNP, and BNP is a Nazi Party, jostled with police outside the main entrance. More>>

END_OF_DOCUMENT_TOKEN_TO_BE_REPLACED

A panellist Â on Al BeBeeCeera suggested that Mr Bari believed the kidnapping and killing of British soldiers was a good and Islamic thing.Â Mr Bari was not (even) mentioned by name, but was implied in the panellist’s reference to the “leadership” of the Muslim Council of Britain. For that he getsÂ Â£45,000 in damages?Â

The Islamofascists must be laughing their sorry asses off!

Hmm, I think we all know the answer to this one…

“Humphrys presents no evidence whatsoever that the Jamia Binoria madrassa he visitedÂ in Karachi, and whose hospitality he has abused, is brainwashing its pupils into becoming terrorists.Â This is a man who blithely informs his readers that there are “relatively few Wahhabis compared to the Sunnis and Shias”, evidently oblivious to the fact that Wahhabism is a variant of Sunni Islam.”

Sure, there is never “any evidence” to prove that the ROP is bad news. Â A BBC reporter cannot be expected to bang his head on the floor as hard as the Bungla does, Â but that doesn’t change the substance. Not a bad effort from the otherwise useless Beep:

Inside a Pakistani school where children are being brainwashed into terrorists

“Even the Rabbi and his wife at Nariman House were sexually assaulted and their genitalia mutilated”.Â Remember, the Rabbi’s wife was pregnant.

The Imam in charge of the madrassa could not have been more welcoming.Â

I sat on the carpeted floor of his office enjoying the cool of the air conditioning, thankful for this temporary refuge from the broiling streets of Karachi – perhaps the most overcrowded and dangerous city on the continent of Asia.Â

On the other side of the madrassa’s high gates, 18million people were struggling to survive in the heat: the vast majority of them out of work with no hope of a job; millions living in slums as foul as anything I have seen anywhere in the world; small children dodging the lethal traffic, banging on the windows of cars stopped momentarily at a junction to beg for a few rupees, competing with old men and women doing the same.Â And amongst them an unknown number of mostly young men playing an infinitely more dangerous game.

These are the men who are capable of walking into a mosque run by a moderate Muslim leader and blowing him to bits – as they did while I was here – or of driving a car loaded with high explosives into a hotel and reducing it to rubble, murdering dozens in the process.Â

Or strapping on a suicide belt and blowing themselves up on a London train.

* The result of this indoctrination you can watch here:Â Massacre in Mumbai:Â Graphic video of the attack in which Holy Warriors killed explicitly to uphold the “prestige of Islam.” The Religion of Peace in action!Â Chilling phone transcripts of Mumbai terrorists with their LashkarÂ handlers

It was because of men like them that I was here in the Jamia Binoria International Madrassa, the biggest in Karachi, pretending to enjoy the thick tea sweetened with condensed milk and several spoonfuls of sugar pressed upon me by the friendly imam, Mohammed Naeem.

I wanted to know whether his madrassa was one of those that gave shelter to these men or – even worse – brainwashed naive young people into believing that the best way to serve Allah was to murder those of us who do not share their views.

END_OF_DOCUMENT_TOKEN_TO_BE_REPLACED

One of Radio 2’s most popular religious presenters has launched a stinging attack on the BBC suggesting the broadcaster is biased against Christianity.

Don Maclean, 66, who hosted Good Morning Sunday for 16 years, said the broadcaster was ‘keen’ on programmes that attack the Christian church.

He said programming chiefs were keen to take a ‘negative angle at every opportunity’ in a way they do not with other faiths like Islam.

* Â Spencer: Comparing the Christian right with the brutal ayatollahs in Iran is childish nonsense — not that that stops anyone from doing it

END_OF_DOCUMENT_TOKEN_TO_BE_REPLACED

* No surprises here: nothing could possibly have more priority Â for the effeminate wankers from Al BeBeeCeera than the gay and lesbian agenda.Â

According to some supporting a gay Muslim program. So what if Muhammad, Allah’s Messenger and most perfect of all creation, condemned homosexuals to death, and they are being actively persecuted in jihadi hotbeds suchÂ as Iraq? “Gay Muslim story for EastEnders,” fromÂ BBC, via JW:

EASTENDERS is set for its most controversial storyline yet – when a Muslim character embarks on a passionate gay love affair.

The pair will be shown snogging in scenes expected to shock and offend conservative Muslims.

Homosexuality is traditionally deemed forbidden by Islamic law and the Koran.Â

Over 100 complaints over BBC’s Muslim head of religious shows

‘Vast majority’ of complaints were about BBC head of religion and ethics Aaqil Ahmed not being a Christian.

* Dhimmitude and appeasement sux. But the effeminate, Â progressive serial-wankers at Al BeBeeCeera suck and swallow, and can’t get enough of prostrating themselves to their Moslem overlords.

* Here’s what happens if you appoint Muhammedan’s to rule over you. but that’s only the beginning: 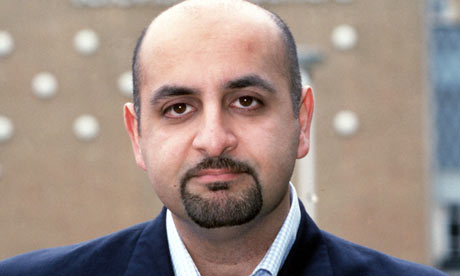 Aaqil Ahmed: moving from Channel 4 to the BBC. Photograph: BBC

TheÂ BBC has received 115 complaints over its appointment of the first Muslim to the role of head of religion and ethics.

Channel 4 executiveÂ Aaqil Ahmed was confirmed in the post on Monday, becoming only the second non-Christian â€“ after agnostic Alan Bookbinder in 2001 â€“ in the BBC’s 87-year history to be appointed to the role.

It is understood the “vast majority” of the complaints are about Ahmed not being a Christian.

In a statement, the BBC said: “We have received complaints from our audience regarding our decision to appoint a non-Christian as the new head of religion and ethics.